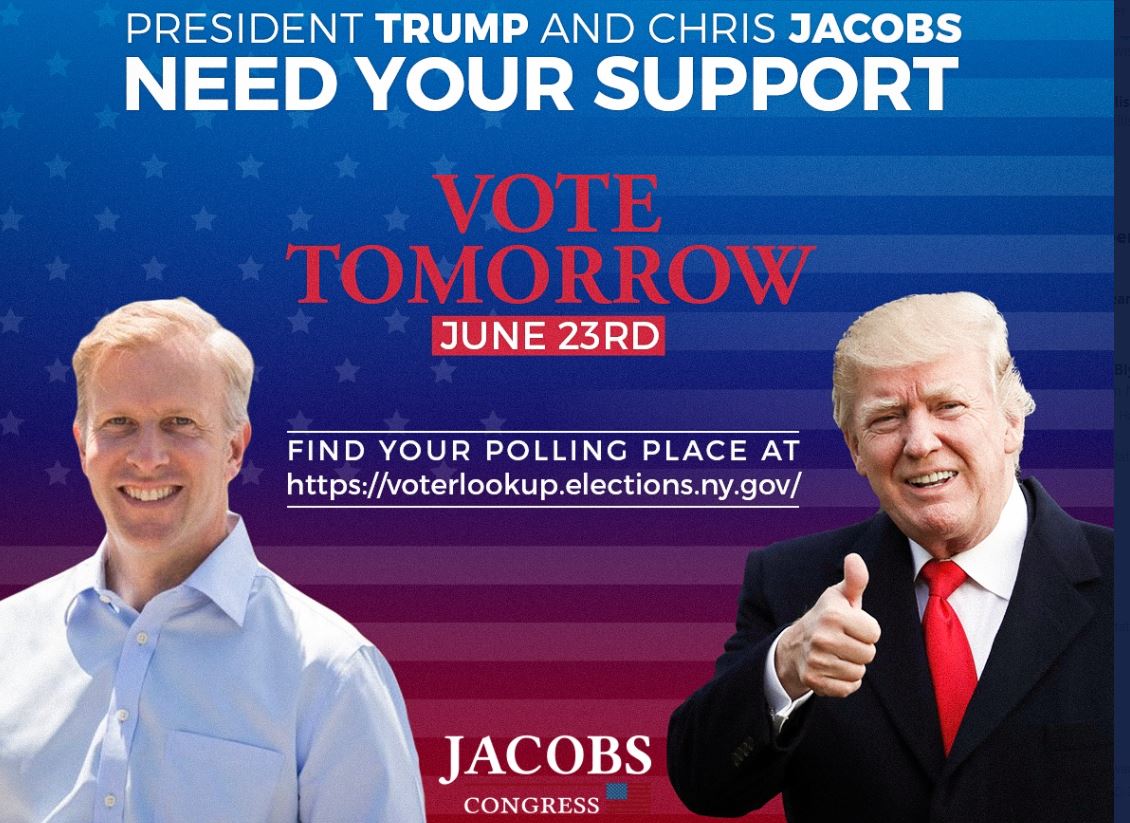 When Congressman Chris Jacobs first announced his candidacy for the House of Representatives, he posted a pretty racist video to his Twitter page that was just vicious towards Spanish-speaking economic migrants from Mexico and Central America. When Jacobs ran for the State Senate in 2016, he was publicly silent, never answering questions about whether he supported Donald Trump. Behind the scenes, he told union audiences that he did not support Trump. In 2019, however, the Erie County Republican Committee, which has various close ties to Trump, coordinated a Trump endorsement of Jacobs. That led to a congressional campaign where it almost seemed as if Jacobs was Trump’s running mate, or vice-versa.

Jacobs narrowly won a special election in June, and he is now running for his first full term in Congress. June, you’ll notice, was only four short months ago. Yet in that short span of time, Jacobs has gone from full MAGA TRUMP TRAIN to Trump who?

His latest TV ad makes no mention whatsoever about Donald Trump. Trump‘s name and image do not appear – not audibly or visibly. What a difference four months makes.

🚨NEW AD🚨: since being elected I’ve been working to rebuild our economy, get Americans back to work safely, and create good-paying American jobs 🇺🇸. With your help, I am going to build on this record of results in my next term. https://t.co/QODQtkzJQU pic.twitter.com/FJC2wVKlGE

Look at him. He’s a “job creator” through his real estate investments. He gallivants about the district, maskless, pretending to “fight” to protect people from insurers discriminating against them due to pre-existing conditions. Donald Trump is nowhere. He is appealing to the people in the middle who are disgusted by Trump. It is amazing what the epic mishandling of a hundred-year pandemic can do.

Here’s an example of what Jacobs’ ads looked like before Trump caught the ‘vid and went crazy on Dexamethasone.

EARLY VOTING STARTS TODAY: Western New York needs conservative leadership, and Im ready to get to work fighting for you and @realdonaldtrump knows it. He has given me his complete endorsement for both elections on June 23rd! Get out and vote!https://t.co/WXctoU9nEV pic.twitter.com/yG1qJU5V6W

Chris Jacobs repeated the Trump Administration’s fraudulent lie that the New York Green Light Law justified the termination of Trusted Traveler status for New Yorkers. He deliberately backed Trump propaganda that was not only false, but represented an unprecedented punishment of a state’s residents by the federal government to which they pay taxes over a manufactured political issue.

Chris Jacobs is just another flaccid opportunist who has taken another step up the ladder of political power. He has no plan to better your life or the lives of the people hurting the most in this post-Covid reality.

Donald Trump has ruined this country. He has deepened class, racial, political, religious, and economic divisions that were already well-carved. Especially since his impeachment acquittal, which showed him he could engage in unprecedented conspiracies for political gain with impunity, he has carved out the closest thing this country has had to a strongman dictatorship in its history. Donald Trump is a disaster, and Chris Jacobs is part of that disaster.

He went so far as to vote “no” on a bill to strengthen the U.S. Postal Service, and I don’t think it was a mistake. When you surround yourself with brazen liars, why should we take you at your word?

What we can glean from Jacobs’ current propaganda is that Donald Trump is polling poorly enough in NY-27 that it’s best to not mention him, and that people like Obamacare insofar as it rendered illegal insurance company discrimination against people with pre-existing medical conditions. But Chris Jacobs would probably tell you he opposes Obamacare. The problem is he has no alternative plan available for review.

And that’s what really matters about the Republican Party – its only ideology now is belligerent lying and nihilism. It is only against things and people and groups. It has no plan except “whatever Trump says.”

The 27th has had enough of millionaires named Chris who are too timid to answer to – and serve – the people whom they purport to represent.