The Trumps: A Sea of Gobs in Need of a Michael 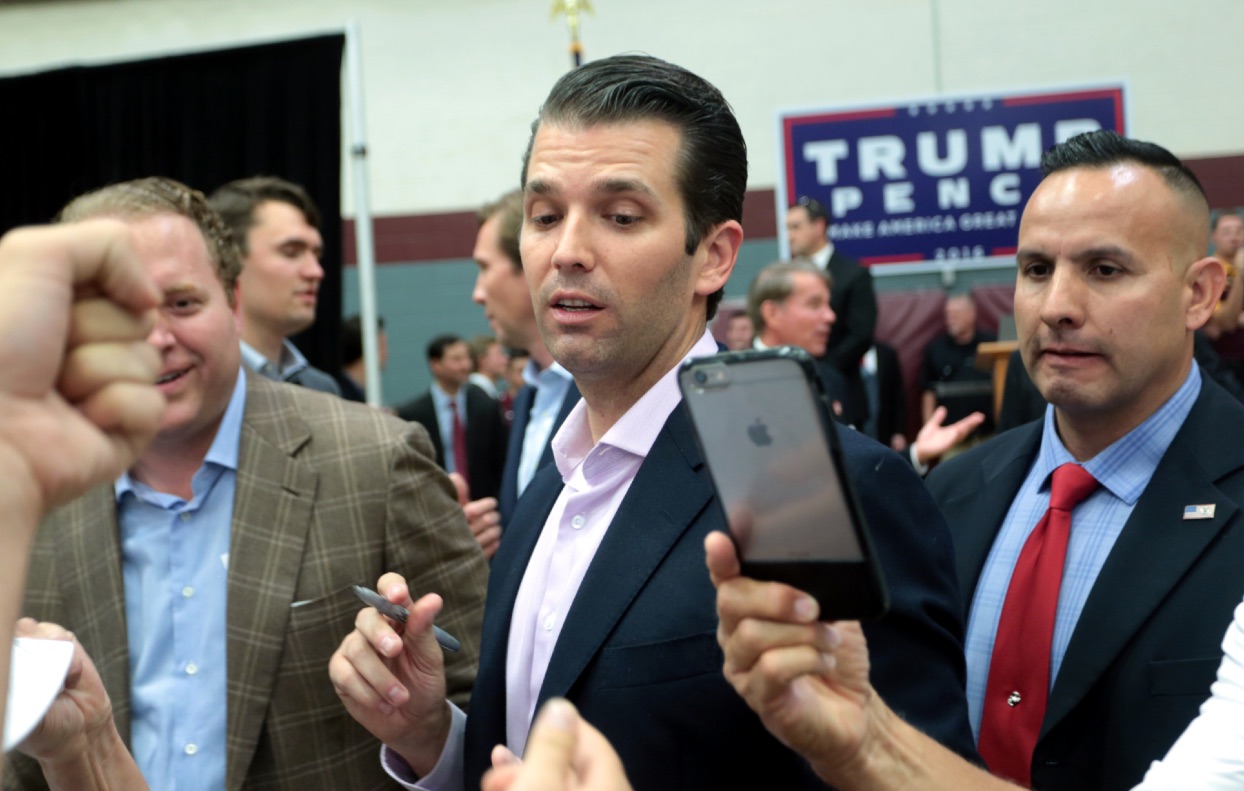 If the Trump family are the Bluths, Donald, Jr. is Gob.

The New York Times obtained an email string from early June 2016 in which an intermediary contacted Junior to set up a meeting with Russian “government” operatives who supposedly had dirt on Hillary Clinton. The meeting was to be with Putin/Kremlin-connected lawyer Natalia Veselnitskaya, whose primary brief has been to push for repeal of the Magnitsky Act. Magnitsky was a lawyer whom Putin harassed before having murdered, and Congress passed the law to deny visas to – and freeze assets of – Putin cronies. In retaliation, Putin blocked Americans from adopting Russian orphans. This was set up by an Azerbaijani pop star, “Emin”, and his manager, Rob Goldstone.

When people tell you this is about “adoptions”, it’s not. It’s about sanctions that Congress passed that are specifically targeted at evil Russian malefactors.

Some in the American intelligence community think this meeting was a “dangle” by the Russians – an effort to sniff out how receptive the Trump people would be to meddling. Quite receptive indeed, it turns out. Go look at Goldstone’s emails again – he seemingly goes out of his way to identify these people as Russian government agents who are part of an official Russian government effort to help Trump.

Emin’s father is a Putin stooge and big-time developer in Russia. Goldstone was involved in Trump’s production of the 2013 Miss Universe pageant, and that interconnection led to this, which may arguably be even uglier than collusion to fix an election:

In response to the first Times article, Don, Jr. issued this statement, written on Air Force One en route home from the G20 in Hamburg and signed-off on by the President:

It was a short introductory meeting. I asked Jared and Paul to stop by. We primarily discussed a program about the adoption of Russian children that was active and popular with American families years ago and was since ended by the Russian government, but it was not a campaign issue at the time and there was no follow up.

The the New York Times reported that the meeting was set up to get Russian dirt on Hillary Clinton, Junior said:

After pleasantries were exchanged, the woman stated that she had information that individuals connected to Russia were funding the Democratic National Committee and supporting Mrs. Clinton. Her statements were vague, ambiguous and made no sense. No details or supporting information was provided or even offered. It quickly became clear that she had no meaningful information.

Later, after the Times reported that Trump, Jr. was told it was part of a Russian government effort to help the Trump campaign, Junior tried to pass it all off as just a regular guy getting some opposition research from a friendly source.

Obviously I’m the first person on a campaign to ever take a meeting to hear info about an opponent… went nowhere but had to listen. https://t.co/ccUjL1KDEa

When the Times contacted Donald, Jr. to let him know it had the emails themselves, her released them on Twitter and wrote,

To put this in context, this occurred before the current Russian fever was in vogue.

What the email string shows quite clearly is that when approached by a middleman peddling Russian government intelligence on Hillary Clinton, Donald, Jr., Paul Manafort, and Jared Kushner reacted enthusiastically and acted fleetly. The issue is – what happened next? Because the timeline of what happened after that June 9 meeting with Veselnitskaya – a person who frankly had no business being in the country in the first place – a lot of interesting things happened.

Two days before the meeting, Trump gave a speech promising to give a “major speech” about Hillary Clinton’s “crimes” on June 13th.

I am going to give a major speech on … probably Monday [June 13th] of next week and we’re going to be discussing all of the things that have taken place with the Clintons. I think you’re going to find it very informative and very, very interesting.

After Veselnitskaya’s visit to Trump Tower, it was as if a dam had burst. Literally within the hour after the June 9th meeting, Trump tweeted his first reference to Hillary’s “missing” “33,000 emails” – he had never said that before, but said it almost daily since. This jibes perfectly with the allegations in the Steele Dossier about Russia peddling supposed intelligence on Clinton to Trump’s campaign. After those in the Trump orbit spent a year falsely denying any communication – much less collusion or coordination – during the 2016 election, and after Donald, Jr. changed his story three or four times on this June 9th meeting, what rational person would believe that the meeting was a “nothingburger”, or inconsequential? Even Trump, Jr. admits that the meeting was set up so he could obtain secret Russian kompromat on Hillary Clinton, but that Veselnitskaya instead talked of “adoptions”. Even taking that at face value, the kompromat was the quid pro quo for weakening or repeal of the Magnistky Act.

Even Grover’s sells “nothingburgers” smaller than this June 9th meeting. The circumstances surrounding the aftermath of that meeting reveal that much more was likely discussed and agreed-upon.

Within days, Julian Assange crowed that Wikileaks would be publishing things about Hillary Clinton. A few days later, the news broke that the DNC’s computer network had been hacked by Russian operatives, and “Guccifer 2.0”, took credit. The US Intelligence community has identified Guccifer 2.0 as a fictional construct created by Russia’s GRU and FSB. Three weeks after the meeting, DCLeaks published the first hacked DNC emails. Within a few days after the meeting with Veselnitskaya, membership in the /r/the_donald subreddit spiked larger than at any time before or since.

I wrote about it as early as July of last year.

By mid-July, the Trump campaign, led by Paul Manafort, worked to remove language from the Republican platform that called for military aid to Ukraine to counter Russian military hostility. Days later, Wikileaks released thousands of DNC emails. On July 27th, Trump said, “Russia, if you’re listening, I hope you can find the 33,000 emails that are missing. I think you will probably be rewarded mightily by our press.” A few weeks later, Roger Stone told a Republican apparatchik, “I actually have communicated with Assange. I believe the next tranche of his documents pertain to the Clinton Foundation but there’s no telling what the October surprise may be.”

On August 21st, Stone tweeted, “Trust me, it will soon [sic] the Podesta’s time in the barrel.” On October 7th, a “Joint Statement from the Department of Homeland Security and Office of the Director of National Intelligence” formally accuses Russia of hacking the DNC to “interfere with the US election process”, the Access Hollywood pussy grabbing tape is released, and within one hour, Wikileaks has published the first of Clinton campaign manager John Podesta’s private emails, which continued to be released in daily dribs and drabs until election day for maximum anti-Clinton impact. On October 12, Stone confirms that he communicated with Assange through an intermediary, who is now thought to be former UKIP chief Nigel Farage.

After the election, President Obama applied some targeted sanctions against Russia for its interference in our electoral process, and Russia threatened retaliation before now-disgraced Trump National Security Advisor Michael Flynn intervened.

The Trump people are now saying it was a rookie mistake. Here’s why that’s a bullshit cop-out: not a lot of people ever work on more than one Presidential campaign; they’re all pretty much rookies at that level.

They’re trying to say that everyone collects opposition research, and this was no different. Except it is different for this reason: opposition research is stuff that is “researched”; i.e., you hit Lexis and find articles, you check clerk’s websites and court dockets. You talk to associates and enemies of the target. It is completely different – and not routine “opposition research” to be approached by people identifying themselves as representatives of a hostile dictatorship who purport to have compiled a secret intelligence dossier on your opponent. Donald, Jr. knew exactly who these people purported to be, and what they were offering. His response? “If it’s what you say, I love it. Especially later in the summer”.

The last round of talking points referred to the June 9th meeting as a “nothingburger”. But they’ve been saying that all along – not just about this meeting, which is only now coming to light, but about the entirety of the Russian hacking, disinformation, and other active measures interference with the 2016 election. Trump repeatedly calls it “fake news”, and tweets out warnings about not believing stuff that’s attributed to anonymous sources hours before yet another damning report is published about his campaign’s ties with Russian agents.

Wikileaks is one of the glues that bonds this whole sordid affair together. Julian Assange and his website long ago transformed into anti-American, anti-Western, anti-democratic pawns of the Putinist regime. Yet he claims to have an open communications channel with the Trump family.

“But…but the Democrats colluded with Ukraine“.  This is an old Russian propaganda tactic called “whataboutism” – e.g., during Soviet times, if an American complained about the repression of free speech or dissent, the Russian would not address the complaint, but instead point out something that happened in the US, such as lynchings.

A few things: 1. Ukraine isn’t a nation hostile to the United States; 2. Ukraine is a nation that has been the victim of Russian theft of the entire Crimean peninsula, and years’ worth of war along its eastern frontier; 3. Ukraine has been on the front lines against Putinism for years; 4. Manafort had worked extensively in Ukraine, working for the Putinist quislings. A Democratic strategist researched this in Ukraine to find out what she could about Manafort’s dealings there.

At no time was there an operation run out of Kyiv by Ukrainian governmental operatives or intelligence.  The evidence that Manafort was paid over ten million dollars to elect Putinists in Ukraine was leaked by a Ukrainian parliamentarian in the Ukrainian press.  It’s not even in the same solar system as what Trump’s campaign is alleged to have done with Russia, even based on the scant public evidence available now.

They had a good thing going, relentlessly denying that they solicited or obtained any help from Russian government agents. Until Gob Bluth Don, Jr. tweeted out the first bit of incriminating evidence.