Fight For Your Kids’ Education 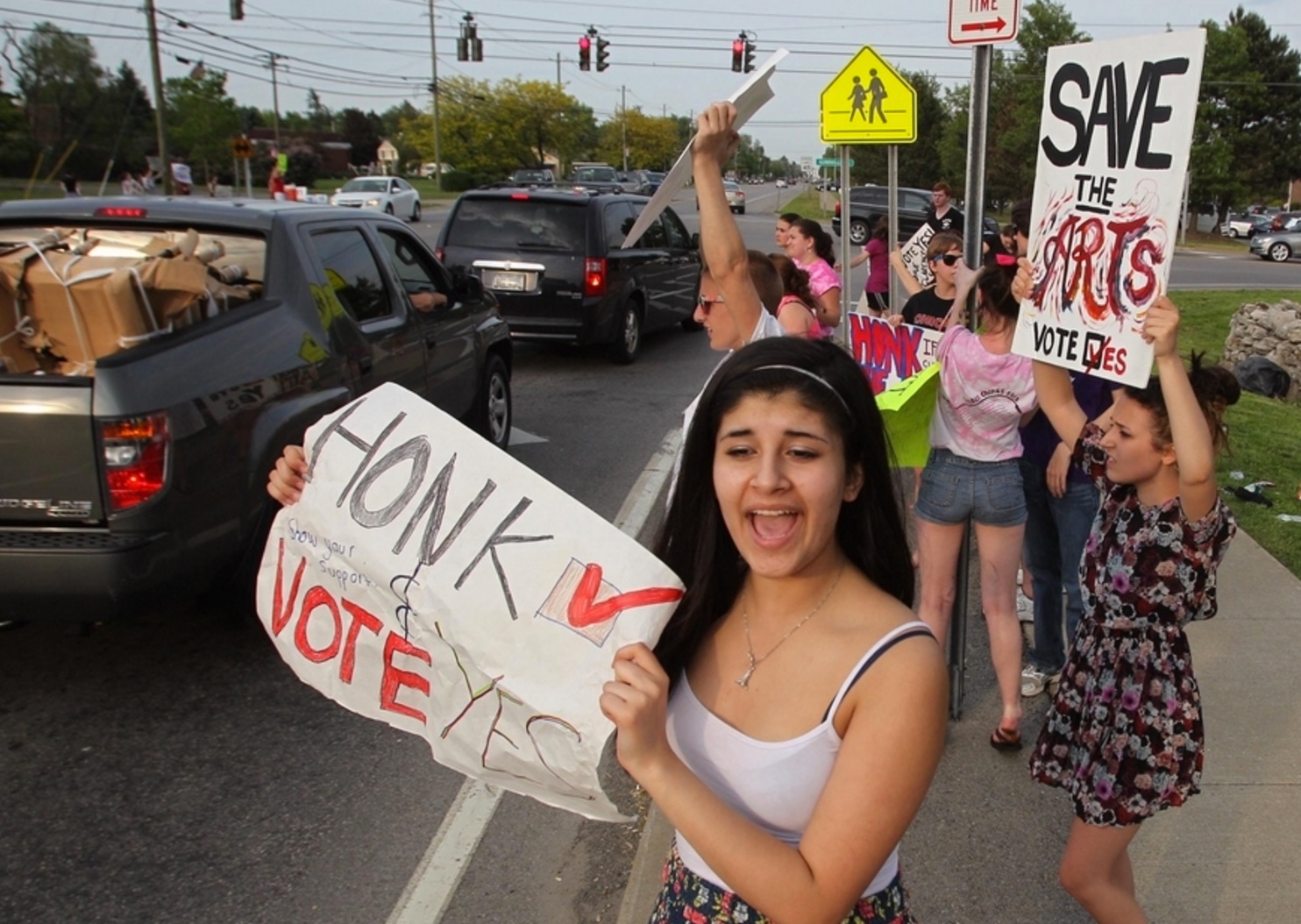 We’ve sprung ahead an hour, the daily temperature is routinely above freezing, which can mean only one thing: school tax plebiscite season is upon us.

Schools are the only municipal entities that have to submit their budgets to public referendum. Kids’ educations are subject to annual taxpayer whim, unlike literally any other governmental body. Kids shouldn’t have to line streets to beg for votes. Parents shouldn’t have to worry every year whether their kids’ favorite sport, club, or desired elective will be funded or exist.

In suburban school districts throughout New York State, school boards are engaging in a budget construction process. The administration presents financial and pedagogical realities and tries to marry the two, and solicits public input to determine how the scales should be set. This year is especially tricky for some districts because the statewide tax cap is under 1%. It is anticipated that a record number of districts throughout the state may seek a tax levy hike in excess of the cap, necessitating a supermajority of local voters’ support.

Clarence made that attempt in 2013 and failed, while in the midst of a statewide pension funding crisis brought about by the 2008 stock market crash. It was a lesson the school board took seriously, and in the following two budget years saw levies well under the tax cap. Because Clarence has positive growth, that and other factors result in a tax cap in excess of 3%. The proposed tax levy increase for 2016 – 2017 will be 2.99% to raise the $1.3 million the district needs.

In all, the Clarence district has been extremely careful and frugal since the 2013 crisis, when a failed above-cap budget saw dozens of teaching and staff layoffs. Hundreds of kids lost myriad opportunities as a result of abandoned electives and overcrowded classrooms.

Monday night, the Clarence Board of Education meeting featured three distinct presentations: how to spend a $2 million state technology grant, recommendations from a music curriculum task force, and the third budget construction meeting. As always, there was a small contingent of people who belong to a local anti-tax group that seems only to concern itself with school taxes, not any others.

At Monday’s meeting, one member of the anti-taxers queried why the district needed the $2 million to buy iPads and laptops for classrooms. Did this mean the district couldn’t afford its tech needs because the teachers were overpaid? Why did the district need a state grant for this spending?

The answer, of course, is that a state grant to a district is on a “use it or lose it” basis. Also, this grant is a result of a statewide referendum. In order to qualify for the grant, the district needs to come up with a plan, present it to the community, and submit it to the state for approval. It is a single shot of cash to bring classrooms into the 21st century, and has nothing whatsoever to do with the district’s ability to pay for it out of its operating budget. Indeed, all technology spending is done in partnership with the state. The anti-tax folks were misinformed and wrong about what this spending represented, but they tried to make it seem sinister.

The music task force noted that participation in choral, orchestral, and band is steady or up throughout the district. Our music program is excellent and attracts not only kids from within the district, but acts as a magnet for families who come to Clarence because of it. Here were two eye-opening slides: The lesson ratio for some instruments is closer to 16:1, rather than the ideal 4:1, and the task force recommended hiring one teacher each for the band, orchestral, and choral programs, as well as a teacher’s aide to help with the larger ensembles.

This then segued into the third and final budget construction presentation, which noted the Albany budget process was underway. With the budget due by April 1st, and both the Assembly and Senate had put forth proposals more generous than Governor Cuomo’s, it was likely that districts would get more aid than anticipated.

Since 2013, the district has bent over backwards to appease the anti-tax people who came out in droves to oppose the above-cap budget. This presentation represents the third consecutive below-cap budget, with a modest tax levy increase of under 3%. This enables the district to maintain current staffing levels and class sizes, and if the state grants more aid, the administration recommends applying the money back into the fund balance for a rainy day – and this is a rainy year for many districts.

While past projections have called for a drop in enrollment, this year’s kindergarten class was larger than anticipated, and elementary enrollment is expected to level off sooner than expected.

The median home price in Clarence is $250,000, and a house of that value would see a school tax increase of $70/year, which comes out to 19 cents per day, or $5.83/month. Last year, a massive town-wide re-assessment took place just days before the school budget plebiscite. Most homes saw their assessments go up, but this means that the tax rate has dropped dramatically, as set forth here: Spending for next year is up 3% because wages are up 3%. The anti-tax people hone in on this as unsustainable or excessive – that 75% of the school budget is dedicated to payroll. But schools don’t manufacture widgets; they educate kids. This must be done with teachers – without them, there’s no school.

Nationwide, there is a teacher shortage. Low pay, public scapegoating and lack of support, and a reliance on testing has turned the teaching profession into an unattractive one throughout the country. Not so much, however, in New York, where teachers are paid reasonably well, compared to other places. If the anti-tax people had their way, teacher pay would simply stagnate or drop. That would lead to teacher abandonment of the district in favor of better pay and benefits. One person took to the microphone to ask why teachers didn’t voluntarily give up pay and benefits in order to help fund the additional personnel the music department needs. You don’t attract the best teachers by scapegoating them every year and demanding that they forfeit money that they’ve earned.

The budget proposal underscored the financial stability and concern for tax fatigue that threatened the district 3 years ago. Only a small pack of die-hards can oppose with s atraight face a below-cap levy increase with a drop in the tax rate.

Another issue that came up was a contract renewal with the school administrators’ union. During the 2013 crisis, the administrators voluntarily re-opened their contract and took two years’ worth of a pay freeze to help the district. The administrators got a pay raise of 2.95% over the next three years. One anti-school commentator queried how the district could justify that.

Two members of the school board were elected in 2013 during the budget crisis, and both of them advocated a vote against the above-cap budget, pledging to work for sustainability of school taxes and budgets. Both of them voted in favor of the administrators’ contract, noting that the Bureau of Labor Statistics showed wage growth of about 2.2%, and this was within a range they could support for the district’s hard-working personnel. The anti-tax demagogue alleged that this was not happening in the private sector, and that the majority of Erie County residents worked for government.

That, however, isn’t true. By my calculation, about 10% of Erie County workers are employees of the federal, state, or county governments. If you factor in municipal hires, that number probably grows somewhat, but not to over 50%. If the facts don’t back your assertion up, you can’t make up data.

Nowhere nearly enough parents show up for board of education meetings in most places. There’s nothing more important to a parent than their kids’ education, and when a school board is in its fourth year of being under assault by people not embarrassed to lie and manipulate data in order to make a false point, parents need to stand up and fight. If you’re in Clarence, please join Keep Clarence Schools Great. If you live in another municipality, let’s talk about how we combat WBEN-type anti-school rhetoric to ensure that kids’ educations aren’t sacrificed at the altar of stasis.