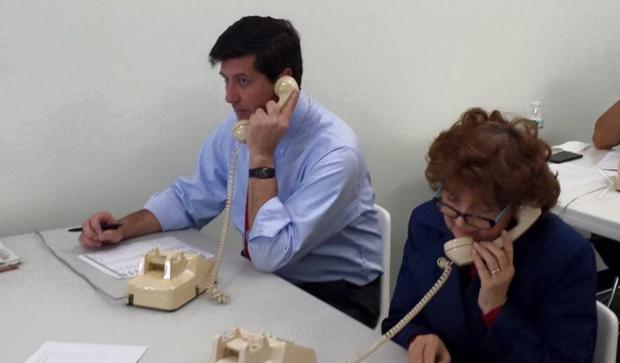 Mark Poloncarz cruised to an overwhelming victory last night, defeating Assemblyman Ray Walter 65% – 34%. As a karmic aside, Poloncarz accomplished what Chris Collins couldn’t – re-election to that post.  In Lancaster, the town’s Republican slate – including thuggish incumbent supervisor Dino Fudoli – fared pretty horribly. Winning 58 – 42, Democrat Johanna Metz Coleman will become the town’s first female supervisor, and Democrat Diane Terranova will become town clerk. It was almost a clean sweep for the Democrats, and a humiliating rebuke for the Fudoli experiment.

What Fudoli seems to have learned from his erstwhile mentor Chris Collins is that western New Yorkers’ patience for obnoxious and thuggish political behavior has a short window.

Yesterday, an off-duty police officer coming in to vote at a fire hall in Lancaster overheard and accused Fudoli of muttering something about punching him in the face, and confronted him. It’s unknown whether Fudoli will be prosecuted, but it was emblematic of his ugly, bellicose, and childish behavior. The spectacle culminated in Fudoli and a representative from the Lancaster Police Benevolent Association calling in to Tom Bauerle’s show to explain their side of the story, Fudoli acknowledging he said something about punching the officer out, and that he had apologized. The gentleman from the PBA went on to explain Fudoli’s complaints about alleged police harassment by going into some detail about “suspicious vehicle” calls that prompted those incidents.

Western New York and Lancaster will be better off without Fudoli in elected office. I’m sure that “good government” and “good person” are not mutually exclusive.

Ray Walter – a good person – will go back to the Assembly and lives to fight another day. His campaign for County Executive was a bit quixotic, his sales tax proposal was fundamentally cynical, and he sell the idea of jettisoning a competent and hard-working incumbent. His inability to break 40% speaks volumes about Poloncarz’s continued political aptitude, both in policy and salesmanship.

We shouldn’t be electing judges at all, judicial candidates shouldn’t have to pander to an electorate, and cute ads with their kids hardly gives you an idea of a judge’s temperament or qualifications. Brenda Freedman defeated Kelly Brinkworth to go to Family Court, helped along by an ability to get her name on every fusion line while Brinkworth was only on the D line. No one voted for Freedman or Brinkworth on the merits, because no one had a clue about their respective merits. This was all about ballot placement and electoral fusion.

On Grand Island, only two votes separate the two town supervisor candidates, so voting does matter. In West Seneca, incumbent Sheila Meegan defeated challenger Christina Bove. In something of a spectacle, apparent RINO Carl Paladino, in an email co-written by his dog, endorsed Democrat Meegan. The nexus of West Seneca shenanigans right now is that Scott Congel project by the Thruway near Ridge Road.

Finally, I watched with some interest that two TV stations use a Buffalo native but current New York City resident as a Democratic analyst. This person is a professional lobbyist and has been disloyal to Erie County Democratic Headquarters since Steve Pigeon was deposed from his chairmanship 15-ish years ago. (As an aside, this lobbyist wrote a book. At the book’s website, there were three glowing reviews; one from the author’s former boss, and the other two came from two newspapers the author co-owns). This person’s somewhat predictable analysis was that pretty much everything – any prospective result – was going to be bad news for Erie County Democratic Committee chairman Jeremy Zellner.

While the Democrats couldn’t seal the deal in the Liegl and Brinkworth races – in both cases due in part to the Republicans outmaneuvering the Democrats in setting up the minor fusion party lines – I think Zellner had a pretty good night, as his close confidant Mark Poloncarz won an overwhelming victory. Maybe WKBW and Time Warner Cable could find a more loyal, and local Democrat to comment on Democratic politics, they don’t seem to have a problem extending that courtesy to Republicans.