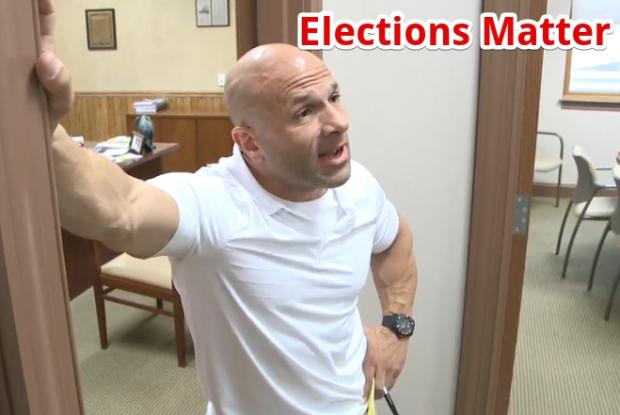 Usually around this time of year, I do a list of endorsements. I try to have fun with them; last year, whilst writing for a competing publication, I did my endorsement in verse.

Despite a high-profile County Executive race, this has been a very sleepy election season. Turnout will likely be pretty low – 20% is optimistic. That means that fully 80% of the eligible and registered electorate can’t be bothered to take literally a few minutes out of their day to exercise their franchise. People have fought and died for your right to vote. You pay lip service to supporting the troops for protecting our freedoms, but here you’re handed the right and ability to control the future direction of your town, city, and county, and chances are you can’t find five minutes between 6am – 9pm to fill in a few scantron boxes and feed your ballot into a scanning machine.

As far as being a responsible citizen of a representative democracy, voting is quite literally the least you can do. Yet 80% of you won’t do it.

You people who are registered to vote, but don’t bother – you’re useless. You should be ashamed. You’re a disgrace. Go to elections.erie.gov and find out where you’re supposed to vote, and go. Plenty of campaigns and party committees will give you a ride if you need one – just ask them.

Here are my endorsements. They are mine alone, and do not in any way represent the opinion or decision of the Public, its authors, editors, or publishers, nor of the place I work, nor of the Buffalo & Erie County Public Library, where I am a member of the board of trustees.

Mark Poloncarz is a personal friend of mine. I met him in 2003 when I was working to elect Wesley Clark and he was working to elect John Kerry. We then served together on the WNY Coalition for Progress. I have lit dropped for him, campaigned for him, and my firm represents the County in a small handful of cases. I also know and like Ray Walter. I don’t know him as well as Mark, but he’s a good guy – a mensch, I once called him – and he went to the Thruway with specific questions I once asked on Twitter.

Both of these candidates want the county to do well. Mark, however, is my pick.

Substantively, do you remember when Republicans wanted a county manager as part of the charter revision process a decade ago? The elected County Executive would be sort of a charismatic leader, promoting the county, while a non-partisan professional manager would run the day-to-day operations. Mark Poloncarz is a policy wonk and a guy who is a strong and effective manager. He is as close as you’re likely to get to a day-to-day manager looking for ways to improve the delivery of county services, and also a tireless promoter of our region. He’s incorruptible, and he loves what he does, not afraid to get into the weeds of county government.

Ray’s hilariously named “fair share” tax proposal is an effort to rob from the poor to give to the rich and not-so-poor. Population alone isn’t how the 3% permanent sales tax revenue was meant to be shared among the various municipalties, and Ray’s effort to pit city vs. suburb when that’s pretty much the last thing we need to do is shameful. His shoot-first-ask-questions-later effort to scandalize a non-scandal also called his seriousness and judgment into question.

A lot of people have complained about how the party bosses pick the judicial candidates, thus depriving the electorate of a choice.

My response: the electorate shouldn’t be choosing judges in the first place.

You don’t get to elect federal judges. Many other states also have governors appoint judges as vacancies come about. In Massachusetts, a nominating commission submits a name to the governor, who then passes it along to an elected “governor’s council“, which vets the candidate for qualifications and likelihood of impartiality, and then approves the lifetime appointment. The judge chosen never has to pander to voters, concoct silly commercials with their kids, or make any sorts of promises of any kind.

The judicial branch should be free from campaigns and elections, and you shouldn’t have to vote for a judge because of a cute video with their kids in it.

There are only two competitive races: Morton v. Liegl and Loughran v. Marlette. If Loughran holds on to his seat and Liegl defeats Morton, the legislature swings to a one-vote Democratic majority. Ted Morton has already been vetted based on his questionably ethical and un-declared loans from financial planning clients, and the electorate shrugged. For his part, Morton tried to smear Liegl with the taint of “fraud”, but it backfired because it was completely untrue. Yelling “fraud” is a lot easier than explaining the ins and outs of bankruptcy law, but the Republicans played too fast and too loose with the facts, as they did when accusing Poloncarz of being under some phantom investigation.

The attack pieces against Liegl are far more misleading. Those pieces accuse her of “bankruptcy fraud,” “cheating the system” and “concocting a scam.” A Buffalo News review of the claims found none of that to be true.

…David Jaworski, an attorney for Liegl and her family, called the Republican allegations “untrue and libelous” based on his personal knowledge and investigation into the records. Republicans have been unable to produce any other supporting evidence of their claims, beyond the initial bankruptcy trustee claim.

Morton’s ethics are questionable, his required disclosures were incomplete, and he essentially lied about his opponent. I don’t know what more you need.

As for Loughran, that’s easy: Loughran is sufficiently independent (he’s pissed the Democrats off here and there), and is a knowledgable and likeable business owner who definitely deserves re-election.

If you live in the town of Lancaster and you vote for Dino Fudoli, I don’t  know what’s wrong with you. Mr. Fudoli is a petty and vindictive glibertarian who considers government to be the “enemy” and public employees to be moocher/taker garbage. In December 2014, Fudoli blamed the people who got stuck in the Snowvember storm for their own predicaments. Fudoli whined about a lack of county plows, but he never requested any using the decade-old computerized system towns use to do so – a system he ostensibly oversaw whilst in the County Legislature.

Fudoli is now fighting with the police union in his town because why not. And Dino Fudoli doesn’t think it’s important for him to pay his property taxes on time, or possibly at all.

If you live in Lancaster, this is the best 8 minutes you’ll spend today:

If Fudoli thinks it’s unfair for the Department of Environmental Conservation to declare his property a wetlands, then he has the right and ability to bring suit for whatever redress to which he’s entitled. Nothing gives him the right unilaterally to stop paying his property taxes, nor does it explain his refusal to pay the property taxes on his former residence.

Who is thug “Richard Heaney”?

When a taxpayer fails to pay property and school taxes on time, the county must make the town and district whole, and then has to chase the delinquent taxpayer down. This sort of behavior is unconscionable from a public official and disqualifies this person from public office. Fudoli also took a very important stand in favor of maintaining a blatantly racist team name for the high school. He also doesn’t know how the internet works.

Polls are open from 6am – 9pm on Tuesday the 3rd of November.

Please go vote like your democracy depends on it.