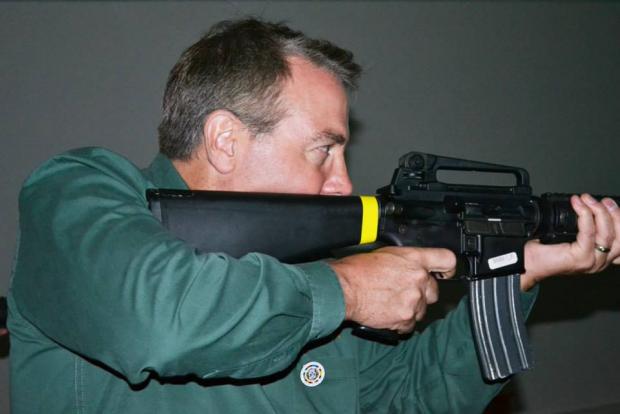 Last week, we examined Assemblyman David DiPietro’s hatred of Muslims and Islam, his deliberate and admitted ignorance to anything resembling facts, and just how allergic he is to knowledge and learning.

DiPietro took to Facebook and WBEN’s airwaves to expound on how an elementary school in East Aurora was busy indoctrinating 3rd graders in jihad, or something. The books in question – Nasreen’s Secret School, and the Librarian of Basra – are set in Afghanistan and Iraq, respectively. They teach young kids about different cultures and about how knowledge and education are things that need to be protected and fought for in places less enlightened than the US. By any measure, they are excellent books that teach a valuable lesson.

According to DiPietro, he:

Just talked to an irate parent. Parkdale school in East Aurora is teaching third graders(8-9 year olds) about the Koran, Mohammed and the Muslim faith. It is MANDATORY reading for Common Core! The teacher would not let the parents see the book until after they asked 3 times and threatened to go to the principal!!! The reading is all done in school and the books can not be taken out of the classroom! MORE TO COME!

More to come? Here’s more. While my pieces took down the underlying ignorance and bigotry, the East Aurora community weekly harvested some facts.

I wish Mr. DiPietro would have called me or popped his head in [my office] … He was misinformed and posted inaccurate information,

You don’t say. An elected official would go to Facebook and 90 minutes’ worth of talk radio and present inaccurate information based on misinformation? Who would be so irresponsible?

“To what extent are they Islamic books in terms of expressing or explaining the ideas or ideals or tenets and beliefs of Islam?” Bauerle asked DiPietro toward the beginning of his appearance on the radio show. DiPietro answered that he had not read the books, and one caller asked if he thought it was irresponsible to “incite a hailstorm before getting all the facts.”

DiPietro said no, because it was an important issue that should be discussed, that he trusted the parent he had spoken to and said he intended to talk to school officials and “get a lot more information shortly.”

David DiPietro and WBEN’s Tom Bauerle and Tim Wenger would be this irresponsible. But that’s not all. As DiPietro and Bauerle weaved the story through manufactured memes like “Islamic indoctrination”, they really caught their stride as they assailed Common Core as the catch-all bogeyman for everything sinister. So, DiPietro pivoted:

… mentions that the parent had said the two books “have been basis of the curriculum for weeks,” which prompted Bauerle to liken the school to a cult.

“Now if this was just one book out of 20—every week they’re doing a different book—fantastic,” DiPietro said. “But it’s not, and that’s where we draw the line.”

A 3rd grade class was dictated by Obama and Common Core – which sounds a lot like “communism” – to read Nasreen and Basra for “weeks?” Like a “cult”? Could that possibly be true? Of course not – consider the depraved sources.

However, Klimchuck said the two books that have caused such a controversy are just that—single pieces of a nine-book Common Core module for third grade. The class focuses on each book in the unit for one week, besides a main book—“My Librarian is a Camel: How Books are Brought to Children Around the World”—that gets about two weeks of attention. The two Winter books were both discussed in October.

“[The unit is about] the power of reading, and the courageous efforts people go through to access education … this whole unit is all about becoming a better reader and how that will help you succeed in any walk of life,” Klimchuck said.

Other books in the module include “Rain School,” a book that talks about education in Chad, Africa; “Thank You, Mr. Falkner,” which touches on a student with dyslexia in modern-day California; “That Book Woman,” about a traveling teacher in a rural Appalachian area of the United States; and “Waiting for the Biblioburro,” about

Here is the module itself. Had DiPietro bothered to – ahem – educate himself by contacting the principal or the teacher and getting both sides of the story, as well as a copy of the module, before taking to WBEN’s airwaves to spread hysteria and lies, then he’d at least have been acting as a responsible adult. What he did instead is present lies and misinformation based on ignorance and prejudice.

I challenge any fair-minded person to review this Common Core 3rd grade ELA curriculum and tell me it’s wrong or improper or unreasonable, much less some sort of socialist indoctrination.

Taking another tack, DiPietro thought that he found a constitutional argument, throwing “separation of church and state” back in the liberals’ dumb, evil faces. Wrong.

…public school students would never be allowed to read a book that references Christianity.

“If that had been God talking to Jesus Christ [in the introductory quote], we would have the ACLU [American Civil Liberties Union] up our butts so fast, Tom—we would have people screaming to keep religion out of our public school,” he said.

Klimchuck said a school’s role is not to teach religion, but to discuss issues of similarities and differences between cultures if they come up in discussion.

“Our role is to expose kids to everything—our role is not to teach religion,” Klimchuck said. “There are books that reference religion. A child in second grade made a comparison of [the myth] Pandora’s Box to Adam and Eve—we said, ‘yes, it’s a very similar story.’ We talk about differences—the theme is respect for everyone.”

Respect for everyone: a concept that’s anathema to knee-jerk reactionaries like David DiPietro. “Shoot first and ask questions later” is why the NY SAFE Act exists.

Now, what about DiPietro’s claim that parents were forbidden access to these books?

“I have a really hard time believing that,” Klimchuck said, adding that both books were on display during Open House in September and brought to a PTO meeting, and that one class had been given a homework assignment to take the book home and read it to their parents.

She said the only reason she could think of that a book wouldn’t be allowed home is that if there weren’t extra copies and the book was currently in use in the classroom. She also mentioned that the books in the unit were discussed each day during the week, and since some children were forgetting their copies at home, the teacher said to leave them in school during the week.

The books, in other words, were everywhere and available. But even if the books were not available to take home, there’s got to be some alternative, right?

Klimchuck said she invites any parent that has concerns about the curriculum to come into school so they can sit down in the library and go over the book together.

According to Klimchuck, East Aurora began using the Common Core Module that includes the two Winter books in 2012. That year, an introductory letter went out at the beginning of the year to all third grade parents, explaining the two books and why they were chosen, how teachers talk to the students concerning reading about difficult issues like violence and war, and how the books are meant to tie into the social studies curriculum.

Teachers also integrated articles from “Time for Kids” and Scholastic, Inc.’s “News for Kids” connecting the stories to Malala Yousafzai, a real-life Pakistani teenager who was targeted for speaking out for girls’ rights and whose life has connections with the situations portrayed in the two books. Klimchuck said that year, she had one parent raise additional questions, but no other feedback.

You’d figure that there was a huge outcry over these books to get a sitting Assemblyman not only involved, but to expound on the radio against reading, right?

This year, one parent, Lisa Hilliard, spoke at the November School Board meeting about her concerns that “Nasreen’s Secret School” was too violent for the age group to which it was being taught, and that it contained inappropriate materials. She also said she was having a hard time getting responses from her daughter’s teachers…

…Klimchuck said she replied to the parent who spoke at the meeting with a letter that included the unit’s book list, copies of the aforementioned articles the children read with the unit, and copies of district policy explaining how to request that the superintendent review objections of instructional materials. She also apologized for the delay and said the November snow storm that canceled school for a week and parent-teacher conferences might have caused the teachers to take longer than usual in responding.

One parent raised a concern, and it was promptly addressed. Any outcry since DiPietro’s nonsense started?

Since DiPietro’s post, Klimchuck said she’s only received two or three calls from parents requesting clarification of the books, but nothing else.

“What this is telling me, is that next year we’ll be even more proactive,” she said. “We’ll make sure we send out the [introductory] letter,” and have all the classes bring the book home for homework, she added.

When Bauerle’s show called her office and invited her on to speak on behalf of the district during the Assemblyman’s interview, she declined, saying she’d rather speak to DiPietro directly. She said she and his secretary have been in touch to set up a meeting, which will hopefully occur by the end of the month.

Unlike the career politician, the professional school principal declined to turn her school and its ELA curriculum into a spectacle.

“I’m disappointed that misinformation was posted,” Klimchuck said. “It incited anger and misinformation, and it turned into this disrespectful … and disturbing thing.”

Next time you wonder why teachers and school administrators earn a living wage with nice benefits, consider the children they have to deal with. Children like David DiPietro, who combines ignorance with a lack of impulse control, to embarassing effect. DiPietro out-earns most teachers, and enjoys the same state health and retirement benefits, but I must have missed his call to reduce and eliminate these perks. Being a tea party guy is all well and good in theory, but in practice DiPietro is a statist taker/moocher.

At a bare minimum, we should expect our elected officials to be informed and responsible. David DiPietro appears incapable of those basic character traits.

By the way, what did DiPietro tell the reporter from the Advertiser about all of this? How did he explain himself?

The newspaper left several messages for DiPietro on his cell phone and at his district office in Albany, but he did not return them by this publication’s deadline.