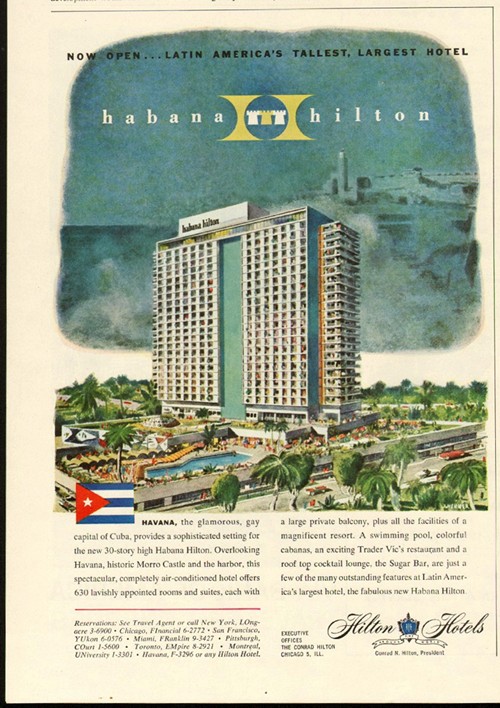 The biggest hypocrites in the world are Cuban exiles who oppose the normalization of our diplomatic relationship with the Cuban regime.

By way of background, the US normalized our diplomatic relationship with Stalin’s Russia in 1933. We maintained diplomatic relations with Nazi Germany all the way up to the declaration of war in 1941. By no means does having an embassy in a country signify approval or endorsement of the host nation and its system of government. It is, as the name implies, the normal way in which nation-states interact with each other.

It is through discussion and engagement that desired change can be made. The embargo and our attempts diplomatically to isolate Cuba since 1961 have objectively been a thorough failure. As in 1961, a communist Castro wears olive drab and heads a nominally socialist mafia that oppresses its people, stifles expression, and rejects the marketplace of goods, services, and ideas. The embargo has accomplished little. Keeping Americans and their money out of Cuba serves only to help the regime perpetuate the revolution, giving them an easy scapegoat to justify their oppressive behavior and economic backwardness.

Eastern Europe unshackled itself from Marxism-Leninism in the late 80s and early 90s, and the entire former Warsaw Pact, except the former Soviet Union, is now a free and democratic member of the European Union.

I posited that, on the question of changing our diplomatic relationship with Cuba, the opinions of Cuban dissidents matters to me. If they’re happy, I’m happy, I wrote. On Facebook, conservatives attacked this idea as folly. Examples:

U.S. public policy should be formed by foreign dissidents, not by duly elected American officials. Venceremos!

Not at all what I wrote, of course. When I pointed that out, here was the reply,

Yes, and perhaps Barry can bow deeply from the waist to Raúl, and apologize for Amerikkka’s fifty-year efforts to stop Fidel from imprisoning Cuban citizens.

But then this came in:

As I sit in Miami preparing for a meeting with another Cuban American CEO – my third in two days – I can promise you Alan that the preponderance of opinion of Cuban exiles is against this Obama move. By far. So, what you’re saying here is: “I only care what [rare] Cuban dissidents like Yoani Sanchez [who agree with my world view] have to say about it.”

Well, I never discounted the opinions of domestic Cubans, but since that’s where we’re going, yes. I believe that the opinions of Cubans who live in Cuba and fight the regime from within are far more relevant than that of exiled CEOs in Miami. Or Marco Rubio. Or Ted Cruz. Or any other Cuban-American who knee-jerkedly demands an abolition of Communism before we open up a relationship with the Cuban dictatorship.

I have no idea if Yoani Sanchez “agrees with my worldview” or not, except insofar as she fights a dictatorship from within at considerable personal and professional risk. To my mind, rejection of dissident opinion is not something that, e.g., a Ronald Reagan would have done vis-a-vis the USSR in the 80s, so it’s shameful to do now when politically expedient. In fact, I think it’s shameful.

Absent any other rational explanation, I reckoned that weighing the opinion of exiles as more persuasive than that of in situ dissidents must be based on the fact that the latter aren’t awash with cash and supporting Republican candidates for office.

Respecting the informed opinions of both sides and devising your own is a more effective tack if you ask me. For example: I’m not for keeping the present US policy in place. I’m for requiring change in Cuba before changing US policy. We didn’t do that, which history proves is a serious mistake.

There has, of course, been some incremental change in Cuba. They ended the exit visa requirement for travel. The harassment continues, but they’ve laid off dissidents a bit, and freed – or promised to free – key political prisoners. They have liberalized the economy for small-scale family-run private enterprise, even allowing people to be hired and fired – something even Tito’s Yugoslavia didn’t allow. There are now almost 400,000 Cubans who are entrepreneurs, or working for one. The laws have been re-written to permit the private ownership of personal and real property.

All of that in just the last 5 years. If “change” is the pre-requisite, it’s happening. Slowly, for sure. Not enough? Definitely. But the same can be said of Burma, and we normalized relations with them. Vietnam, ditto. People’s Republic of China – did that in 1979, and the difference between now and then is breathtaking.

But politicians are still in thrall of the Cuban exile community, which has historically opposed any liberalization of ties with that country. Except.

Except they are the biggest hypocrites.

Cuban-Americans have free rein to travel to Cuba whenever they want, as often as they want. They likewise have free rein to send remittances to family members in US dollars, which get converted into (soon-to-be-abolished) convertible pesos, and go to support the regime, (which they supposedly so oppose that they don’t even want to open up normal diplomatic relations with it). The convertible pesos can be spent in special dollar stores to buy imported items and goods that are in short supply in regular shops.

Then when Cuban-Americans travel to that country, the money that they spend also goes to prop up the regime they hate so much that Americans with no family ties to Cuba must receive a special Treasury license to go there.

When Cuban exiles are willing to shut down their own travel and dollar remittances, then I’ll listen to entreaties about how normalizing relations or lifting the embargo is a horrible, capitulatory mistake.

After all, it’s been 50 years and the embargo and cutting of diplomatic ties have done nothing to weaken or abolish the Castro regime. In reality, it’s only given the Castros an ongoing excuse to maintain revolution without end, and to oppress their people.

But because everyone cites opinion polls except when it’s inconvenient to do so (see, e.g.,  Obamacare), note that 2014 polls of Cuban-Americans shows that almost 70% support the normalization of diplomatic relations; 90% of younger respondents support the move. 70% of respondents support lifting the embargo, and a similar percentage believe that the embargo didn’t / doesn’t work.

As for Yoani Sanchez, whose opinion matters more than yours or mine, because she challenges that regime by her very existence, she has this to say:

Still, despite the absence of public commitments on the part of Cuba, today was a political defeat. Under the leadership of Fidel Castro we would have never even reached an outline of an agreement of this nature. Because the Cuban system is supported by – as one of its main pillars – the existence of a permanent rival. David can’t live without Goliath and the ideological apparatus has depended too long on this dispute.

So she fundamentally disagrees with the notion that this was an American defeat; quite the opposite. She goes on,

In the central market of Carlos III, customers were surprised midday that the big TVs were not broadcasting football or videoclips, but a speech by Raúl Castro and later one by Obama through the Telesur network. The first allocution caused a certain astonishment, but the second was accompanied by kisses launched toward the face of the US president, particularly when he mentioned relaxations in the sending of remittances to Cuba and the delicate topic of telecommunications. Now and again the cry of “I LOVE…” (in English!) could be heard from around the corner.

It is important to also say that the news had fierce competition, like the arrival of fish to the rationed market, after years of disappearance. However, by mid-afternoon almost everyone was aware and the shared feelings were of joy, relief, hope.

This, however, is just the beginning. Lacking is a public timeline by which commits the Cuban government to a series of gestures in support of democratization and respect for differences. We must take advantage of the synergy of both announcements to extract a public promise, which must include, at a minimum, four consensus points that civil society has been developing in recent months.

The consensus points demanded by Cuban civil society (a euphemism for dissident activists) are:

Extracting these commitments would begin the dismantling of totalitarianism.

As long as steps of this magnitude are not taken, many of us will continue to think that the day we have longed for is not close. So, we will keep the flags tucked away, keep the corks in the bottles, and continue to press for the final coming of D-Day.

In the New York Times, she writes,

The tension between the two governments lasted so long that now some people don’t know what to do with their slogans, their fists raised against imperialism and their sick tendency to justify everything, from droughts to repression, on the grounds of being so close to “the most powerful country in the world.” The worst off are the most recalcitrant members of the Communist Party, those who would die before chewing a stick of gum, drinking a Coke or setting foot in Disney World. The first secretary of their organization just betrayed them. He made a pact with the adversary, behind the scenes and over 18 long months.

The thaw in relations with the US and concomitant pledges from the Castro regime give the activists some room to demand follow-through. After 50+ years, the Castros lose a bogeyman and gain some responsibility. It’s not everything, but how’s that for a start?