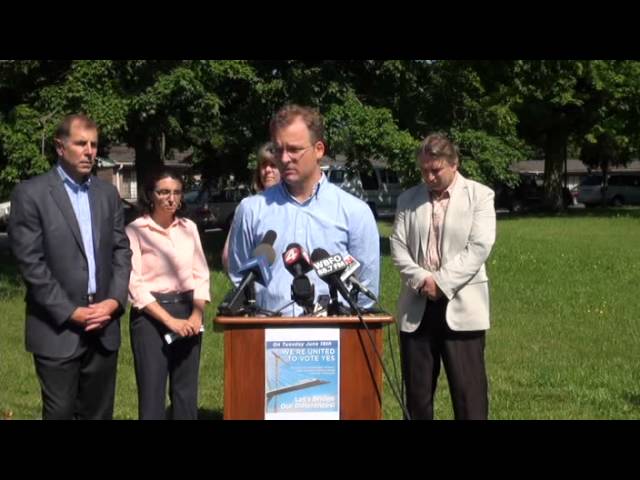 Clarence overwhelmingly passed its revote budget last night. So did most other revote budget districts – Bemus Point passed its original, above-cap budget, but Wilson will be finding out about austerity next year.

Last night, we had 3,541 yes votes and 1,817 voted no. That means we gained about 100 yes votes, and the no votes stayed home in droves. To the extent that the formerly warring factions came together last week to urge, in unison, a “yes” vote on this revote budget, we didn’t get a lot more “yes”, but at least the “no” weren’t energized enough to make the trip anymore.

A quality education is something to which every child is entitled (yes, entitled). There is a concerted effort underway in this country to dismantle the very things that helped lurch us from a frontier backwater into the superpower we are today. There is an organized and well-funded movement to fight a war on the middle class, protecting and comforting the very rich while punishing the poor and destroying the middle class that built this country.

On June 6th, serial entrepreneur Nick Hanauer testified before the Senate Committee on Banking, Housing & Urban Affairs. (Website here) I think that what he said is a fundamental truth that helps inform why providing equal opportunity for America’s middle class families to thrive, excel, and do better each day as compared to the last.

For 30 years, Americans on the right and left have accepted a particular explanation for the origins of Prosperity in capitalist economies. It is that rich business people like me are “Job Creators.” That if taxes go up on us or our companies, we will create fewer jobs. And that the lower our taxes are, the more jobs we will create and the more general prosperity we’ ll have.

Many of you in this room are certain that these claims are true. But sometimes the ideas that we know to be true are dead wrong. For thousands of years people were certain, positive, that earth was at the center of the universe. It’s not, and anyone who doesn’t know that would have a very hard time doing astronomy.

I’ll argue here that prosperity in capitalist economies never trickles down from the top. Prosperity is built from the middle out. As an entrepreneur and investor, I have started or helped start, dozens of businesses and initially hired lots of people. But if no one could have afforded to buy what we had to sell, my businesses would all would have failed and all those jobs would have evaporated.

That’s why I am so sure that rich business people don’t create jobs, nor do businesses, large or small. What does lead to more employment is a “circle of life” like feedback loop between customers and businesses. And only consumers can set in motion this virtuous cycle of increasing demand and hiring. That’s why the real job creators in America are middle-class consumers. The more money they have, and the more they can buy, the more people like me have to hire to meet demand.

So when businesspeople like me take credit for creating jobs, it’s a little like squirrels taking credit for creating evolution. In fact, it’s the other way around. Anyone who’s ever run a business knows that hiring more people is a capitalist’s course of last resort, something we do if and only if increasing customer demand requires it.

Further, that the goal of every business—profit– is largely a measure of our relative ability to not create jobs compared to our competitors. In this sense, calling ourselves job creators isn’t just inaccurate, it’s disingenuous.

That’s why our current policies are so upside down. When you have a tax system in which most of the exemptions and the lowest rates benefit the richest, all in the name of job creation, all that happens is that the rich get richer. Since 1980 the share of income for the richest 1% of Americans has tripled while our effective tax rates have by approximately 50%. If it were true that lower tax rates and more wealth for the wealthy would lead to more job creation, then today we would be drowning in jobs. If it was true that more profit for corporations or lower tax rates for corporations lead to more job creation, then it could not also be true that both corporate profits and unemployment are at 50 year highs.

There can never be enough super rich Americans like me to power a great economy. I earn 1000 times the median wage, but I do not buy 1000 times as much stuff. My family owns three cars, not 3,000. I buy a few pairs of pants and a few shirts a year, just like most American men. Like everyone else, we go out to eat with friends and family only occasionally. I can’t buy enough of anything to make up for the fact that millions of unemployed and underemployed Americans can’t buy any new clothes or cars or enjoy any meals out. Or to make up for the decreasing consumption of the vast majority of American families that are barely squeaking by, buried by spiraling costs and trapped by stagnant or declining wages. This is why the fast increasing inequality in our society is killing our economy. When most of the money in the economy ends up in just a few hands, it strangles consumption and creates a death spiral of falling demand.

Significant privileges have come to capitalists like me for being perceived as “job creators”at the center of the economic universe, and the language and metaphors we use to defend the fairness of the current social and economic arrangements is telling. For instance, it is a small step from “job creator” to “The Creator.”

When someone like me calls himself a job creator, it sounds like we are describing how the economy works. What we are actually doing is making a claim on status, power and privileges.The extraordinary differential between the 15-20% tax rate on capital gains, dividends, and carried interest for capitalists, and the 39% top marginal rate on work for ordinary Americans is just one of those privileges. We’ve had it backward for the last 30 years. Rich businesspeople like me don’t create jobs. Rather, jobs are a consequence of an ecosystemic feedback loop animated by middle- class consumers, and when they thrive, businesses grow and hire, and owners profit in a virtuous cycle of increasing returns that benefits everyone.

I’d like to finish with a quick story.About 500 years ago, Copernicus and his pal Galileo came along and proved that the earth wasn’t the center of the solar system. A great achievement, but it didn’t go to well for them with the political leaders of the time. Remember that Galileo invented the telescope, so one could see, with one’s own eyes, the fact that he was right. You may recall, however, that the leaders of the time didn’t much care, because if earth wasn’t the center of the universe, then earth was diminished—and if earth was diminished, so were they. And that fact–their status and power–was the only fact they really cared about. So they told Galileo to stick his telescope where the sun didn’t shine and put him in jail for the rest of his life.

And by so doing, put themselves on the wrong side of history forever. 500 years later, we are arguing about what or whom is at the center of the economic universe. A few rich guys like me, or the American Middle class. But as sure as the sun is the center of our solar system, the middle class is the center of our economy. If we care about building a fast growing economy that provides opportunity for every American, then we must enact policies that build it from the middle out, not the top down.