A Lesson in Censorship 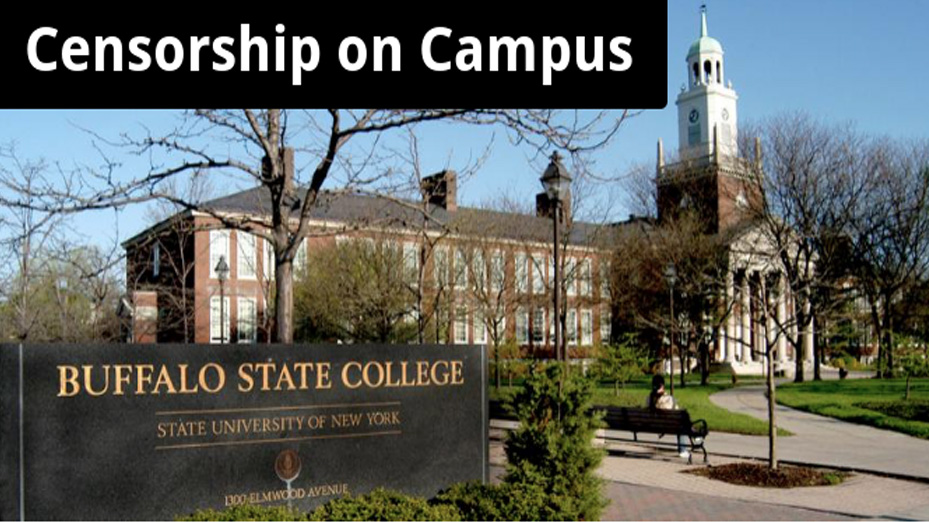 Let’s agree that April Fools’ Day has always been awful, but the age of social media has rendered it insufferable. Of the myriad nonsensical and obvious jokes that get churned out by the amateur comedians in every marketing department, ever, there are but one or two gems. Parody and satire are, to me, funnier and more effective than pranks.

The Buffalo State student paper – the Record – put together an April Fools’ Day edition this year. Changing its name to the “Wreckerd” and publishing satirical and comedic fake news stories, like the Onion does all the time. Admittedly, the Onion is put together by comedians, not by journalism students, but “comedy is hard” and a valiant effort was made to try and make the Buff State community laugh.

The articles from the “Wreckard” is visible online here at this link. There’s an article lauding a “landslide” victory for student government, poking fun at anemic voter turnout by indicating that the winner received 9 votes out of the 15 cast. Poking fun at the school’s mascot, the “Wreckard” wrote that actual tigers escaped from the zoo to defeat (well, maim and kill) another team on the football field. This parody of a restaurant review / travelogue mocks Americans’ weak and shallow understanding of Mexican culture, among other things. Brian Williams is low-hanging comedic fruit, student fashion is made fun of, Cuomo bans “snacturing” or “snacking”,  the Buffalo School board voted 7-1 to “fill the potholes in Carl Paladino’s face”,  this editorial explains how to obey the “heaven or hell” billboards and stay out of hell, pokes fun at weed, and jokingly suggests that Buff State’s President authorized drone strikes on UB. It doesn’t matter whether you think any – or none – of those stories are funny. It was clearly and obviously parody, published on April 1st, and done in a spirit of parody and satire of student life at Buff State. These kids aren’t professional comedians, nor are they professional journalists. They are students who are learning. One thing’s for sure – there was nothing mean-spirited or hateful going on.

But other students – Buff State’s student government – freaked out over the “Wreckard” to such a degree that they summarily froze the Record’s funding and demanded that every copy of the joke paper be recalled and destroyed.

It has come to our attention from many students and faculty members that some of the topics discussed in the ‘Wreckard’ satire addition [sic] were offensive to members of Buffalo State and the surrounding community.”

Please note that your budget has been frozen, all publications of ‘The Wreckard’ must be removed from campus tomorrow by 5PM and relocated to your office.

Offensive? Not as offensive as bull-headed censorship.

The April Fools edition of The Record clearly was satire from the obviously altered name and typeface to the topics, which no one should believe to be true. The edition was witty, smart and sharply written and was meant for nothing more but the entertainment of the student body.

Indeed, it was all of those things. Here is how the student government responded to the reaction to their over-reaction:

Hello Community & The Record, After much consideration; we have reconsidered our actions about freezing your newspaper budget. Our initial actions were made based on the concerns we received from several students. As United Students Government, students come first. The removal of the “April Fools” edition of the paper was called in order to protect our students from feeling uncomfortable. However, The Record you’re our students as well! & the freedom of speech and press proves that us limiting your distribution, is not right. After considering both sides of concerns, we will continue on reaching out to The Record for a meeting where a medium can be reached. We appreciate all of the efforts from alumni, media, and students pertaining the issue. Communication is the most important tool of all, and we would like for The Record to be a wonderful platform for communication to our community, as well as making sure students feel comfortable and protected by USG. Once again, we look forward to talking to The Record at their earliest convenience. Thank you to all. -USG Team

What the actual hell is this all about? This semi-lilterate nonsense is as stupid as the original yanking of funding. The arbitrariness of that de-funding, and the on-a-dime turnaround underscores the question of whether the student government is competent enough to hold its authority over the Record’s pursestrings. The student government’s duties do not surely extend to, “protect students from feeling uncomfortable” – as poor an excuse for censorship as you’re likely ever to see. A paper’s duty – even within the context of a parody issue – isn’t to make people feel comfortable. Its job is to inform and, in this April Fools’ Day issue, entertain. There’s no need for the Record to engage in a tete-a-tete with anyone to reach a “medium”.

Luckily for students, the Record reported on its own de-funding, and subsequent re-funding. At no time, for instance, did the student government indicate to the paper which article(s) was supposedly “offensive” or made readers “uncomfortable”. The administration had to get involved, and wrote:

While the The Record’s April Fools’ satire edition may have been upsetting to some and certainly pressed the boundaries of humor, I am concerned that the United Students Government’s decision to freeze the paper’s funding may infringe on students’ right to free speech.  Because The Record is a recognized student organization, United Students Government provides oversight of the paper, not the college administration.  However, I will reach out to the leaders of both organizations in the coming days to encourage a swift resolution.

Why are people throwing shade at the “Wreckard”? What was upsetting? How did it press “the boundaries of humor”? I didn’t see anything controversial in there. I have to suspect that the fake review of the Mexican restaurant was offensive, but only if you failed to read the actual content, and stopped at the headline.

The only criticism that deserves to be levied in this case is against Buff State’s humorless and hyper-sensitive student government, and its rush to censor and violate the 1st Amendment rights of the Record’s staff; even humor is protected speech.

It seems everyone got a little extra education at Buff State last week. The Record learned how tenuous speech and press rights can be. Student government learned at once how to behave like a fascist dictatorship, and then quickly learned how to change its mind and couch its wishy-washiness in nonsensical faux-empathy. The administration learned how to be mealy-mouthed and effectively patting the over-reactive student government on the back for its censorship by denouncing the paper’s attempts at humor as upsetting envelope-pushing – which is untrue.

In the end, the Record’s staff learned that free speech and press can be protected sometimes simply by getting in touch with the Buffalo News and Jim Romenesko, and shaming the hell out of the illegal actions of student government.

There was nothing at all offensive, controversial, or “uncomfortable” in the Wreckard. It was a funny satirical take on student life in Buffalo, and other matters. People need to stop being such humorless pricks and not destroy free speech rights because of someone’s “comfort”.

April Fools’ Day may be the worst, but it’s not as bad as censorship.

The BPS and its Shiny New Police State

The underlying goal isn’t unique to the Buffalo School District. Throughout New York State, tea party reactionaries have aligned themselves with the state government to bring about a simple equation. That’s more or less what’s being attempted in Buffalo. It’s a district that has more than its share of socioeconomic crises, but instead of helping the most troubled and disadvantaged kids, powerful, monied interests now controlling the district seems to be writing them off. Instead, it’s moving forward with publicly funded private, exclusive charter schools, not all of which are all that high performing, either, thank you very much. It’s not just Buffalo, by the way. In tony, conservative Clarence, a small but well-funded band of tea party activists have succeeded in de-funding the schools, which in turn led to cutting teachers, programs, electives, and every social worker in the district. Kids suffer so that some of western New York’s wealthiest residents can save pennies on their tax bill. No district, teacher, board, or student is safe from this new American movement to destroy public education. But what apparently happened Thursday at a hastily organized public Buffalo Board of Education meeting is something new and chilling. Kevin Gibson is the Secretary of the Buffalo Teacher’s Federation, and has every right to be present at a Buffalo school board meeting, and to speak. He began his remarks with, “My name is Kevin Gibson, and I’m a teacher in Buffalo”. Just a few weeks ago, he gave this powerful presentation, blasting one local charter as being just as “low performing” as any other school.

But this Thursday, Gibson never got a chance to speak. It was a public meeting, and a public comment period. But when Gibson got up, this happened. Keep an eye on Larry Quinn, who seemingly has no patience for this job that he ran for and to which he was elected.

That is simply incredible. He wanted to make “one quick point” and ask “one question”, but was able to do neither. Watch Larry Quinn wave his arm majestically, motioning to the police to silence and remove Gibson from this public meeting in front of an elected board of public servants on public property. Watch tea party “liberty” activist Carl Paladino sit there like a lox, and do and say nothing. Carl Paladino, of all people, talks a big game about liberty and freedom and constitutional values, but when confronted with a genuine opportunity – as a publicly elected official – to carry out those values, he balks. Coward. Carl Paladino, Larry Quinn, and the rest of the school board majority have created a fascist little banana republic for themselves. Rather than righting a dysfunctional ship, they have raised the dysfunction to hitherto-unheard of, comical and undemocratic levels. Quinn interrupts Gibson and has him confirm that he’s a member of the BTF, and says that “this isn’t a BTF issue” before the police officer removes Gibson from the public meeting. What difference does that make? Gibson is a member of the public who has a stake in the Buffalo School District, and he had every right to speak at a public meeting within the rules. He wasn’t speaking out of turn, and never got a chance to begin his point. His membership in the BTF is irrelevant to his right to address the board during the public comment session of a public meeting.

When given any political power, Carl Paladino and Larry Quinn and their allies on the school board behave like every fascist in history. Shut down debate, use the police to stifle dissent.

This is an utter outrage.

America is Better than What It’s Becoming

I’ve censored the following, in protest of a bill that gives any corporation and the US government the power to censor the internet–a bill that could pass THIS WEEK. To see the uncensored text, and to stop internet censorship, visit: http://americancensorship.org/posts/42152/uncensor

America is Better than What It's Becoming

I’ve censored the following, in protest of a bill that gives any corporation and the US government the power to censor the internet–a bill that could pass THIS WEEK. To see the uncensored text, and to stop internet censorship, visit: http://americancensorship.org/posts/42152/uncensor