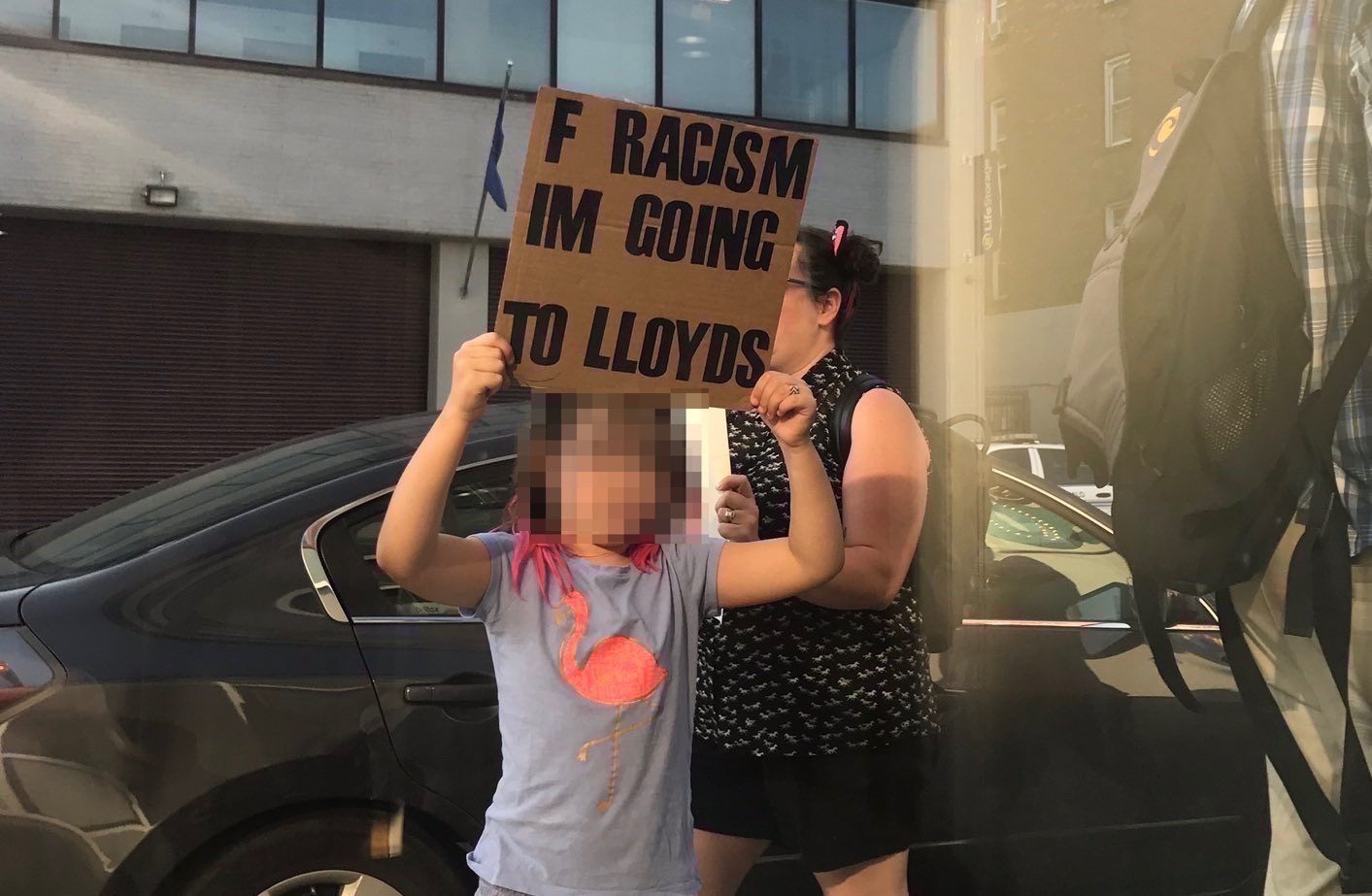 See the kid in that image holding that sign? Obviously, that’s someone’s kid.

Before I continue, please note that I have express permission from the person who took the image to use it, and from the kid’s parents to publish it, provided I pixellate the child’s face.

The kid’s mom attended a protest relating to a fundraiser at a downtown restaurant that has been the subject of some recent controversy.

The sign speaks for itself, but let’s examine it anyway. It reads, “F Racism Im going to Lloyds” [sic]. The parents know that “Lloyd” is singular, but didn’t have the apostrophes needed to render the sign’s punctuation correct. When I first saw it, I thought the sign was hilarious, in part because a kid was holding it. It’s a great protest sign – not too rhetorically heavy, and all-American with its sanitized “f” word, a great anti-racism sentiment, and recognition of the patent choices that consumer capitalism grants us to choose where and how to spend our money.

You don’t have to agree with the sign, or where it was being used to picket, but there is literally nothing wrong with the sentiment “f racism”.

Oh, the hand-wringing over this has been so epic, you’d have thought this was satan himself.

The first person to chime in was the owner of the targeted business, who denigrated it as “child abuse” – a very serious allegation that is in no way true.

Remember a few months ago some guy had the time to secure a ticket to a speech Governor Cuomo gave at UB, only to scream a steady stream of internet comments at him? He wrote about it, too.

LOL “Coloncarz”, right? I mean, you see that the level of thought and discourse here is firmly planted in the 5th grade.

To be clear – I was not at the protest. I had nothing whatsoever to do with the protest – didn’t attend, didn’t organize, am not a member of any group having anything to do with that protest, just so we’re all clear. That’s a lie. I had nothing to do with kids holding signs with “implied vulgarities” – a pretty hilarious way to make something benign seem sinister. “Thugs…keeping it real classy”, sort of like the unhinged threats that this guy hurled at people on the street? Threatening to “take your ass out, too”, and acting belligerently towards people?

Full version is below. “Who would Jesus threaten” is a good line.

Wow. that’s “classy”. This “thug” should have been arrested on the spot for disturbing the peace.

This is a guy supposedly so worried about a kid holding a sign with an “implied vulgarity”, yet threatened to “take your ass out to” literally within the presence of that same kid.

County Executive Mark Poloncarz weighed in on Twitter with, “Why is a girl that young holding that sign? That’s too much. Bring her to the protest but that’s not needed.” I replied that I didn’t have a problem with a 9 or 10 year old kid holding a sign that reads, “f racism”. Rightist commentator Michael Caputo agreed with Poloncarz, adding, “kudos to [Mark] for standing up to #Buffalo radicals’ profane use of children.”

Forget the subject matter of the protest itself – set that aside for a moment. It’s “radical” to oppose racism? It’s “child abuse” to teach your kids to detest racism? It’s “profane” for a kid to hold a sign that reads, “f racism”?

No, none of those things is true.

Racism is the thing that is obscene, indecent, and profane. Racism is the thing that everyone should be piling on about, not some kid holding a sign with the express permission of her parents, who could do without the lecture from you, thank you very much. I’m a parent, and I’d have no problem whatsoever with my kid holding a sign that reads, “f racism”. I’d rather have my kid march in a rally denouncing racism than have one of them go down to Charlottesville to protest the long overdue eradication of monuments to slavery-fueled treason.

Are you saying that you oppose the sentiment, “fuck racism”? Because that’s what the sign is about. It’s not a controversial thing, and this focus on its form – as opposed to its substance – is nothing more than a bunch of people with no standing tsk-tsking and substituting their morality for that of this girl’s parents.