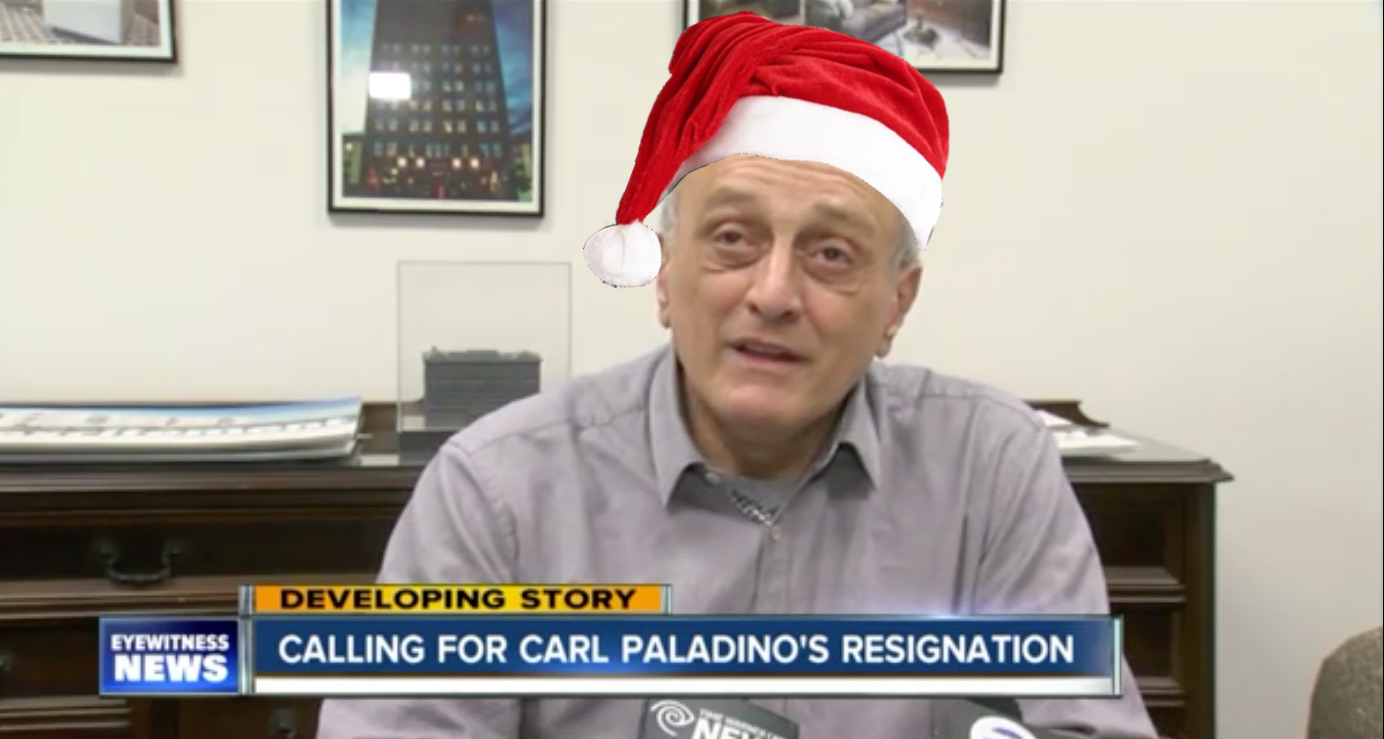 ‘Twas two days before Christmas, when all over Twitter,
Carl’s awful “wish list” left people embittered.
He ignored all the stockings and chimneys and such,
instead listed things that he hated, so much.

He brought up Obama, and wished he was dead,
then considered Michelle, and here’s what he said:
“return to being a male,” then this kicker –
she should go back to live with Zimbabwe’s gorillas.

White supremacist hatred? That’s not a surprise.
He said horrible things about Asians, you guys.
And black people know that Carl isn’t their friend.
On this point, in fact, we can’t even pretend.

Jim Pitts, when he served on elected committees,
said Carl Paladino sits “on top of the city…,
…like a vulture on dry bones” and he wasn’t wrong.
It’s amazing we’ve put up with this for so long.

This creature who wishes the President dead,
and Valerie Jarrett, he’d have ISIS behead,
reveals that his character is simply depraved,
when he tells the First Lady to live in a cave.

He went to the radio and then on TV,
to confirm his sick wishes – a racist set free.
He didn’t say sorry, or temper his hate,
instead “retarded liberals” made him irate.

His eyes – how they darted! His visage, askew!
His cheeks like a corpse’s, his nose, how like Gru!
With his sick little mouth, he was evil and sinister,
absent of joy, with no makeup administered.
No hint of a smile, and no glimpse of his teeth,
is there any humanity there, underneath?
With a few ugly paragraphs, a racist outburst,
we saw years’ worth of civic promotion reversed.

We demand his removal from Buffalo schools,
and aver that he’s broken their series of rules,
and now, see him suffer this massive indignity,
of all people: Trump denounced his malignity.

It’s Christmas, and we should be filled with good cheer,
and hope for a far less eventful new year.
This angry old racist does not speak for us.
The only thing that we should feel is disgust.

I heard what he said last night on channel 7,
that ramping his rhetoric up to eleven
drives media interest right up through the roof,
as if all of this nonsense was some kind of a goof.

Carl could have just slammed all the Washington policies,
and avoided gorillas without qualm or apology.
He’s out of his mind, and he has no contrition,
So, everyone: please share and sign this petition.

It has nothing to do with PC run amok;
it’s obvious Carl is a racist old schmuck.
Buffalo students don’t need the alt-right.
“Happy Christmas to all, and to all a good night!”