Throwing Shade at the Homeless & Destitute 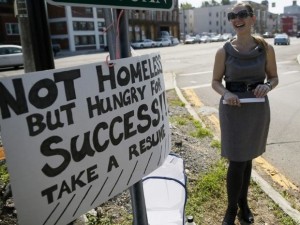 I first saw Carrie Kemeling’s story where you’d sort of expect to find that story – on Facebook, with a link to Channel 7’s story. I thought it was sort of a cute idea, that someone would stand on the street corner handing out resumes seeking a job. But whoa:

“All of America drives by the homeless and says, ‘Why don’t you get a job?’ Their sign is getting read,” explained Kemeling.

According to her resume, she’s looking for a job in sales management and has experience as a sales representative, teller, consultant, design consultant and general store manager. She has a high school diploma.

What!? After reading what Kemeling told the Buffalo News, the idea doesn’t seem so cute anymore.

“If people can give money to somebody who is homeless and not looking for work, they can also help someone who is trying to help themselves,” she said. “I believe this is going to be a success story. People want to see self-motivation. And I’m not giving up on myself and never will.”

Homeless people have it tough enough that they don’t need millenial yuppies throwing shade at them. The poorest of the poor are in desperate need, but not for insults.

Ms. Kemeling insinuated that, unlike her, homeless people are not “trying to help themselves”, or aren’t “self-motivat[ed]”. I disagree. I’m sure that if Ms. Kemeling had no food or shelter or money, she’d be trying – self-motivated – to help herself whatever way she can. If that means standing by an exit all day begging for spare change, that’s an effort, too.

So, she stands there – in the midst of a pretty poor neighborhood – handing out resumes out of self-motivation and helping herself.

“I’ve gotten lots and lots of positive support,” she said. “I’ve had few people stop and walk over to me to get a résumé. And some people have given me the thumbs up, so I’m feeling the Buffalo love.”

On Friday, before she quit her job, she was at the site, and 20 people took her résumé. On Monday, she handed out 50 more and had a job interview at a temp agency by the afternoon.

Kemeling said she was offered a position but didn’t accept it because the compensation “wasn’t what she wanted.”

So, she’s self-motivated, but, unlike a destitute homeless person, she’s also picky! She had a job, which she quit last Friday.

Kemeling had worked as a sales representative at Brian Michael’s Jewelers in the Town of Tonawanda for almost three years until quitting Saturday.

“Even though I had a job, I’m still looking for better and I know I’m better,” she said. “I’m looking to find a company who is willing to invest in me and I’m investing in them as well. I’m really extremely trainable.”

“I know I’m better” is the special snowflake disease.

She said she’d been “looking to advance myself for the past year. I sent résumés but didn’t get a response. So now I have the time to stand here and actually put myself out there. If I’m going to give my résumé to someone, I want to give it to someone who wants it.”

She said her strengths are in retail sales, marketing and creativity, pointing to her unorthodox job search as an example.

I’ve worked retail before. I don’t remember using a resume to get that sort of job. I remember hustling from place to place and filling out innumerable applications before landing a retail position.

Kemeling has a high school diploma, and before coming to Buffalo, worked as a teller at a credit union in South Carolina.

I think I might know why her resumes for marketing jobs aren’t getting a lot of traction. She told WKBW that she couldn’t afford a degree. She’s a NYS resident. Get thee to Buff State, ECC, UB – you can afford it.

She said she left the jewelers last week because she was overlooked for a promotion.

But, the jeweler says that’s not true.

Brian Levine, owner of the business, said Kemeling wasn’t up for a promotion. An opening for an assistant manager was filled, but Kemeling didn’t have any management experience. He and his staff remain baffled by her abrupt departure from the company, Levine said.

So, she has a HS diploma, worked retail at a jeweler’s, quit abruptly with no notice, tells the papers she was overlooked for a promotion but has no management experience. Her prior experience is as a bank teller.

She doesn’t need a job. She had a job. She wants a career in management or marketing? Then she needs a college degree, or a modicum of self-awareness. She rejected the temp agency because beggars can be choosers.

After four hours on the island, Kemeling had more than a dozen employers offering positions, including the temp agency, a shredding company and an online startup. But Kemeling plans to return to the Thruway exit on Tuesday.

“I want to keep my options open,” she said. “I want to give other candidates a chance. There might be others out there who are interested in hiring me.”

Not good enough, guys! I’m better than you!

Furthermore, Kemeling said she’s looking “for a career, not a job.” Her ideal position?

“Working for Donald Trump as his secretary,” she laughed. “Who knows? Anything is possible.”

But seriously, go to college. State schools are affordable. Get a bachelor’s and learn about marketing and statistics and all of the other stuff that everyone else with that career has to slog through. Want a career? It’s not just magically going to drop in your lap because you have a diploma and experience doing retail and being a bank teller. Hell, go work for a bank and maybe move up the ranks there and make a career by being a good worker and eager learner. You’re not entitled to your dream job because you think you deserve it, or because you pull a stunt at a highway exit.

Waiting for someone to drive by and hand you a dream job isn’t hustle; it’s the opposite.

(UPDATE: Channel 4 has posted her resume. It speaks for itself.).