Slut-Shaming and the Patrick Kane Case 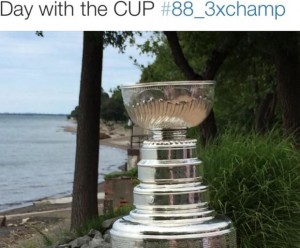 Based on that title alone, it’s safe to say that there is some major internal strife at the Buffalo News over its editorial decisions relating to the Patrick Kane case. After all, on Sunday the Buffalo News itself ran a front-page story that contained a clumsy, misogynistic attempt at victim-blaming.

As a matter of fact, Sunday’s piece could have been entitled, “Restaurateur Takes to Buffalo News to Victim-Blame After Patrick Kane Allegations.”

For the News to now decry (or, let’s say, disapprovingly highlight) a handful of anonymous Tweeters’ victim-blaming, whilst simultaneously contributing to it with the help of a rich and prominent restaurateur, is sheer chutzpah.

It’s easier to shame Twitter anonyms than it is the guy renovating the Statler.

So, the News is broadcasting that it’s bad for some random idiot with the handle @88forever (or something) using Pat Kane’s face as his avi to Tweet how Kane’s alleged victim had it coming, but it’s perfectly ok for nightclub owner Mark Croce to tell two male reporters from the Buffalo News that some woman he saw with Kane at his bar the night of the alleged incident was, “hanging all over” Kane; that she was “forward” and very “flirtatious”. It’s ok for him to add how she was possessive of Kane and demanding of his attention before she left with him and some others. Wrong.

Becker’s piece quotes Robyn Wiktorski-Reynolds from Crisis Services who calls these sorts of slut-shaming, victim-blaming comments, “misguded”, “ignorant”, adding, “these types of things have a chilling effect. It’s repeated and it creates a culture and we’re just perpetuating that culture.” She also addresed Croce’s comments:

Many people have been critical of bar owner Mark Croce’s statements to The Buffalo News describing seeing a woman with Kane at his bar on the night of the alleged attack.

Many people have also been critical of the Buffalo News for printing them because of how inflammatory and irrelevant they are.

The attack allegedly took place later that night or the following morning at Kane’s house. Croce said he did not go to Kane’s house and does not know what happened there.

“A victim should never be blamed,” Pirro said in an emailed statement about Croce’s quotes, as well as comments that have been on social media about the alleged rape. “No one chooses to be raped and any public statement that implies that is just as problematic as a perpetrator’s decision to rape.”

Wiktorski-Reynolds said blaming the victim for a rape because she – or he – showed interest in the assailant perpetuates a culture that tolerates rape.

“They say: ‘What did you expect? Why did you go to the house? Why were you drinking?’ That takes the perpetrator off the hook for not listening, not stopping. … You can change your mind. You have free will.”

The Buffalo News waited two days—and it took a female reporter—to remind people that, “In the eyes of the law, the events leading up to the sex act don’t matter…[c]onsent is one of those things that can be removed at any time during the encounter.” So, it doesn’t really matter what Croce saw, even if he could identify the woman as Kane’s accuser.

Have you noticed, by the way, complete and utter silence from the Buffalo News’ sports columnists? You’d think that a local sports phenomenon being accused of a serious felony would be a big topic. An important topic.

On the issue of withdrawn consent—again, we don’t know what happened or what anyone will be accused of, so this is all hypothetical—what would it take for the Kane die-hards on Twitter and in the Buffalo News’ offices to take these allegations seriously?

We know from the Sunday piece that the alleged victim, “had bite marks on her shoulders and a scratch on her leg after the alleged attack.” But I’ve seen people dismiss that as not a big deal; evidence of nothing more than, e.g., rough sex.

What would it take for people to take it seriously? What if the alleged victim had been bitten several times? Would that change things for you?

Does it have to be more serious than that to prove lack of consent? What about a broken finger, would that be enough?

Would you treat it with more seriousness if the complainant, say, had a broken arm? Is that enough to show that there’s something serious going on? Then would you believe her and credit her story over that of your young, hard-partying hockey hero?

Who’s going to prosecute this case, by the way? We know that it’s very likely that D.A. Frank Sedita is running for Supreme Court—he’s all but announced. His chief of homicide Jim Bargnesi is currently running for Erie County Court. Should Sedita appoint a special prosecutor to ensure that the case is handled properly with the attention it deserves, and to ensure that electoral politics don’t have any adverse consequences on it? Should Sedita resign and pursue his judgeship and let someone take over for him in the interim? This case is a serious one with the potential to end a local sports hero’s career, and no one can afford any distractions.

Finally, I’ve already alluded to the question of Kane’s attorney Paul Cambria to represent him in this particular case due to the possibility that he observed and witnessed something having to with Kane on the night in question. The courthouse grapevine is overactive with rumors of the Kane camp already looking to replace Cambria with someone else.  Names being mentioned include Terry Connors, James Harrington, and Joel Daniels.

The Buffalo News owes it to the alleged victim in this case to do more than just have Maki Becker write a socially responsible article about blaming rape victims for the crime committed against them. It owes that woman – whoever she is – an abject apology. The editor of the paper needs to speak up and explain why the paper felt it necessary to include Croce’s inflammatory and self-serving “observations” when they represent the very slut-shaming Becker examines on Tuesday.

The Buffalo News is the only daily paper in town and it has no public editor or ombudsman. It desperately is missing a mea culpa.

In response to Becker’s piece, the News wisely shut off its Disqus comments, but two got in before the lock: The only thing that comes to mind here is that some at the Buffalo News recognize that it really messed this up on Sunday, and that it made a serious editorial error that it can’t now undo. I don’t see a lot of people defending Croce or the News, except for the ilk that is the subject matter of the Becker piece. And in there, these words are key:

“It’s not about access to sex. It’s about power and control,” she said. “It’s about using sex as a weapon rather than something else.”

She pointed to studies by the Department of Justice that showed that “false reports” of rape are rare – about 8 percent – which include cases that couldn’t be prosecuted for a variety of reasons.

Deciding to go forward to the police to report a rape and undergoing a “rape kit” are never easy for victims of sexual violence, Wiktorski-Reynolds said.

“People aren’t going to the hospital and going to the police because it’s fun or because they’re looking for attention,” Wiktorski-Reynolds said. “It’s a very, very invasive process. It’s serious. It takes hours. There’s a lot that’s entailed.”

It ain’t the 50s anymore, Buffalo News. You went a long way towards perpetuating and promoting rape culture on Sunday. It’s going to take a lot more than pointing fingers at random strangers on Twitter to make amends. Point fingers where they more properly belong—at the people who should know better; at Mark Croce, Dan Herbeck, Lou Michel, and whoever green-lighted that garbage.