Indiana and the Right to Hate 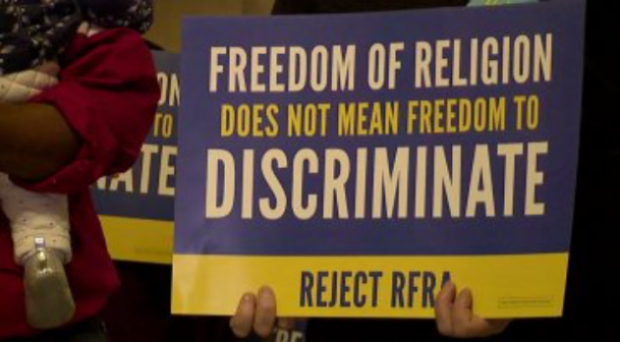 In 2004, Massachusetts was the first state to legalize same-sex marriage. It wasn’t done legislatively, but by the state’s Supreme Judicial Court, which ruled that it was unconstitutional to deny homosexual couples the right to marry.

Back in the mid-90s, the federal government saw the writing on the wall and passed an idiotic and narrow-minded piece of legislation called the “Defense of Marriage Act“, as if “marriage” as an institution needed federal “defense” from the marauding homo hordes, as opposed to, e.g., hetero divorcees. To his eternal demerit, President Clinton signed this dreck into law. In 2013 the Supreme Court declared DOMA unconstitutional, opening up federal benefits to married same-sex couples. That recognition was expanded administratively to ensure that same-sex married couples were treated like a heterosexual married couple for purposes of federal law.

In the nine years since Massachusetts’ highest court made history, the United States went from one state permitting same-sex marriage to thirty-seven, plus the District of Columbia. That’s a swift adoption curve.

Naturally, there will be resistance to such a rapid and dramatic societal shift. Alabama allowed same-sex marriage for a few weeks, but some of its state officials are taking a “state’s rights” stand and forbidding licenses from being issued. Apparently their stubborn adherence to Jim Crow generations ago didn’t teach them any lessons. Kansas is similarly complicated. There have also been a handful of cases where merchants have refused to serve same-sex couples, ostensibly on religious or political principle.

So it is that Indiana’s governor Mike Pence on Wednesday signed into law something called the “Religious Freedom Restoration Act“. This law doesn’t “restore” religious freedom, so much as it effectively legalizes anti-gay bigotry. Signed in private, surrounded by clergy and social conservative lobbyists, Governor Pence claimed the law didn’t allow anti-gay discrimination. Not unsurprisingly, it is redundantly similar to a federal law President Clinton signed in 1993.

The NCAA, major corporations, and conventions have all expressed concern over how this law might effect their future placement of events and people in Indiana. After all, gay people play sports and spend money, too.

The law will allow businesses to deny public accommodations to gay people and couples, so long as there is some sort of a religious pretext to do so. The argument goes that one should have a right to discriminate against LGBT Americans because homosexuality is against their sincerely held religious beliefs. So, a bakery can refuse to serve a gay couple, a restaurant can eject same-sex dining partners, and lunch counters wouldn’t even need to segregate gay patrons to a separate section – they could simply refuse to serve them.

While Governor Pence rejects the idea that the new law would permit discrimination, when Democratic legislators attempted to add language into the bill to prevent it, Republicans wouldn’t do so. We should pay attention to deeds, not words.

But this whole notion of faith being under attack is utter garbage. According to Pew, (updated in 2012), over 73% of Americans identify as Christians, just under 6% are “other”, like Jewish, Buddhist, Muslim, and Hindu, and 20% of Americans are ¯\_(ツ)_/¯ about faith. Your ability and right to worship are as esconced in the Constitution today as they were 200 years ago. Just like an atheist has no right to demand that a Catholic clergyman conduct a same-sex wedding, a Baptist shopkeeper has no right to refuse service to a gay couple. Atheists don’t get to control what goes on in clerical life, so religious people don’t get to control what goes on in secular life or government.

But in the 50s and 60s “religious freedom” was one of the justifications whites used to maintain Jim Crow. Here’s a speech that Bob Jones, Sr, of the eponymous “university”, gave in 1960 doing just that. Here is a compendium of faux-religious justifications to segregate and discriminate. It’s no coincidence that the Ku Klux Klan burns crosses. The use of religion to justify hatred is not novel, and it shouldn’t be tolerated.

What we’re witnessing is a right-wing attempt to co-opt “political correctness”.  Forget the whole imbroglio over the Lancaster Redskins, which established how the new political correctness is to be against political correctness. This is far more dangerous, because laws are being passed to legalize and justify bigotry. For some, it is politically correct to allow Christians to refuse to accommodate a certain type of person because it is somehow against their religion. Query whether they’d agree if, say, a Muslim shopkeeper decided that his beliefs permitted him to exclude Jewish or Christian patrons.

But being asked to bake a cake for a gay couple doesn’t invoke anyone’s religious freedom. You’re not being asked to solemnize or legitimize something you don’t believe in – you’re being asked to mix up some ingredients and bake a cake. You don’t have to like it, but if we could all get away with avoiding things we don’t like, the world would be a bigger pain in the ass than it already is. Adding, “because my religion says so” shouldn’t be some sort of discriminatory wild card.

This is why using the word “tolerance” is so appropriate. “Tolerance” isn’t a synonym of “acceptance”; instead, tolerance is about holding your nose and putting up with something that’s noxious to you. Frankly, it’s a bad term to use for how it’s usually intended – that you shouldn’t be horrible to other people for any reason. The state of “not being horrible” is what we’re really talking about, and same-sex couples do not leave a trail of victims. Their state of being doesn’t insult or injure your place or your beliefs or your own marriage. Contrary to what many outspoken homophobes argued, same-sex marriage throughout the US hasn’t led to the destruction of traditional different-sex marriage, nor has it led to the legalizaton of bigamy, bestiality, or incest. (see Santorum).

So, no, Indiana, you don’t get to legalize discrimination by using “religious freedom” as a flimsy crutch. You don’t get to flip “political correctness” on its head and allow “sincerely held religious belief” to negate legally protected equality in public accommodations.

This, too, will pass.  All 50 states will eventually – and soon – have legal same-sex marriage. Discrimination against, and segregation of, homosexuals will eventually be illegal and socially repugnant, and history will not lightly judge the people misappropriating God’s love to protect their right to hate.