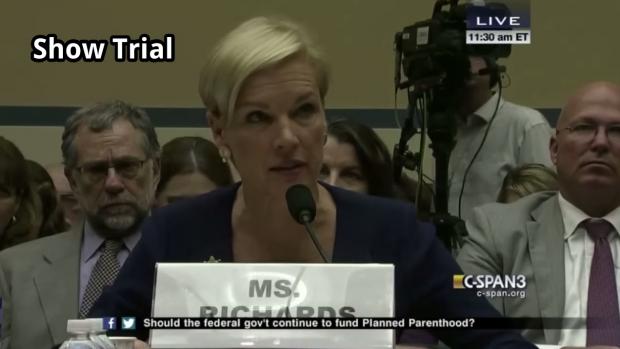 Under the guise of a congressional “investigation”, Republican seat-moisteners lawmakers are trying to do to Planned Parenthood what they did to ACORN some seven years ago. This time, though, it isn’t working. This is mostly because Planned Parenthood has a broader and politically stronger constituency than ACORN ever did, and because the videos that anti-abortion activists have circulated that purport to show Planned Parenthood executives bartering for fetal body parts were so obviously doctored and unfairly edited.

It is true that fetal tissue from aborted fetuses is sometimes donated for scientific research. Research using fetal tissue has resulted in incredible scientific achievements.

The Congressional inquiry was chaired yesterday by Utah Republican Jason Chaffetz, who, along with his right-wing colleagues, spent a great deal of time hurling insults and accusations but not at all a lot of time allowing the affiant, Planned Parenthood President Cecile Richards, to testify.

The entire charade can be summed up in a chart that Chaffetz sprung on Richards at the end of his “inquiry”.  He hadn’t had the decency to show her in advance the chart he was going to use, so she was barely able to respond to it. But it was an especially – intentionally – dishonest piece of propaganda.

Chaffetz was trying to accuse Planned Parenthood of abdicating its role as a major women’s health care provider and instead making all kinds of money off of abortion. Here is the chart he showed: The source is “Americans United for Life”, a radical anti-abortion lobbying group. Is this how these Republicans science and math?

So, the chart is falsely designed to imply that Planned Parenthood now performs far more abortions than breast screenings, but that’s quite obviously untrue.

Kevin Drum went a step further in Mother Jones, showing how the charts should look: And why has the line for cancer screenings gone down? According to Cecile Richards, it’s because “some of the services, like pap smears, dropped in frequency because of changing medical standards about who should be screened and how often.” This is standard Republican playbook stuff, but because of the sheer power and broad reach of the target, it’s not working out. The government isn’t going to be shut down over federal funding of Planned Parenthood, and the vast majority of Americans can see beyond the propaganda and value the important services that Planned Parenthood offers. It remains true that abortion services are never federally funded, and only make up 3% of what Planned Parenthood does. About 41% of the organization’s budget – just over $500 million – comes from federal funding for women’s health and contraception services.

The ACORN entrapment videos – all of which were deceptively edited, and none of which resulted in any illegality – targeted a group that worked to register mostly poor, mostly minority voters. This was supposed to be the sequel.

When Presidential candidate Carly Fiorina lies about a scene that doesn’t exist in any of the Planned Parenthood videos – a scene, incidentally, shot clandestinely without the mother’s permission or consent of a fetus that hadn’t been aborted, but was the victim of a miscarriage – it underscores that this Republican effort to destroy Planned Parenthood has nothing to do with abortion or “sale” of fetal body parts, but everything to do with interfering with women’s health and their ability to enjoy a safe and disease-free sex life. They’ve tried it before, and they won’t be satisfied until they completely alienate the female vote.

In the end, it’s about puritanism and denying to women their basic human rights. Here’s what that looks like:

Thankfully, there were reasonable people present:

It’s ok to be anti-abortion, and it would be great if abortions never happened. However, Planned Parenthood offers contraceptive services, the expansion of which would lower the number of abortions performed in this country. It’s ok to be anti-abortion, but it’s not ok to legislate a woman’s right to make that choice. But most importantly, because federal funds do not and cannot be used to finance abortion services, all of this is a lie. It is all a manufactured show-trial by men who cannot tolerate the idea that women be allowed control over their bodies and their reproductive rights.

As the Susan G. Komen for the Cure Foundation steps deeper and deeper into a steaming pile of its own bullsh*t, consider that all of this is a very calculated political move. What this is is a grave betrayal of Komen’s mission statement:

OUR PROMISE: To save lives and end breast cancer forever by empowering people, ensuring quality care for all and energizing science to find the cures.

Planned Parenthood is under attack from the right because it has the audacity to provide clinical medical services exclusively to women. Most of Planned Parenthood’s mission has to do with reproductive health and services, and yes, 3% of what they do involves abortion services. Because it performs legal, safe abortions in a clinical setting, and because the Republican platform prefers that abortions be done like they were in the old days – by quacks with hangers in alleyways, or abroad – Planned Parenthood must be destroyed.

But Komen and its former funding of PP had nothing whatsoever to do with abortions or even contraception. That’s how we know this is not principled, but political. How is Komen empowering people or saving lives if it de-funds breast exam and mammography services at Planned Parenthood?  The Angry Black Lady sums it up nicely:

Turns out that Komen’s new Vice-President of Public Policy, Karen Handel, is a Forced Birther, and even ran for governor of Georgia on a platform of defunding Planned Parenthood.  Thus, it seems that Komen for the Cure, the purpose of which is to help women, has been taken hostage by Karen Handel and her right-wing Forced Birth views which undermine women and women’s reproductive choices.  In her own words, “Since I am  [anti-choice] I do not support the mission of Planned Parenthood.”

Furthermore, just as the Hyde Amendment prohibits federal funds from being used for abortion services, I presume that the Komen grant money previously provided to Planned Parenthood is used specifically for breast-health, and not for abortion.

This is part of the Republican effort to do to Planned Parenthood what they did to ACORN – destroy any foundation that exists to help the poor obtain some sort of services or rights. Exactly correct. When Komen isn’t busy pimping out the color pink, advocating against legislation to provide free breast and cervical cancer screening, and trademarking, then aggressively litigating any use of the term “for the cure”, it’s plotting to disassociate itself from Planned Parenthood for nakedly political reasons.

Komen’s official line on the reason for cutting off funds to Planned Parenthood was a newly-instituted rule that declared that the organization was not to give funds to organizations under investigation at the local, state, or federal level. According to Jeffrey Goldberg at The Atlantic, former employees of Komen told him that the rule was, in fact, designed to single out Planned Parenthood.

If the new policy is to de-fund organizations that are under some form of investigation, then we ought to all eagerly await the imminent withdrawal of Komen’s $7.5 million for the health clinic at Penn State – an institution that is under administrative investigation arising out of charges of child rape. Komen’s new Vice President in charge of Public Policy is right-wing anti-Planned Parenthood activist Karen Handel, who re-tweeted (then quickly deleted) this:

The backlash has been swift and pointed. People are abandoning Komen in droves, and Planned Parenthood has already more than made up the lost funding through donations.

There are thousands of national, regional, and local anti-cancer charities out there, but there’s only one Planned Parenthood. If you divest your women’s health organization from providing cancer screening for the poor and the underprivileged, you risk painting yourself unnecessarily into a political corner.  Komen may now become a sweetheart of the right-wing, but it will have long ago stopped fulfilling its mission.

Komen isn’t so much a charity as it is a business, and it’s now firmly positioned itself as a business that’s right-wing-friendly and a footsoldier in the culture war. Breast cancer doesn’t discriminate based on race, political affiliation, or voting history. That’s why Komen politicizing itself so blatantly is so shockingly sad and unnecessary.