Protests and Riots, Same as it Ever Was

In the week since a Missouri grand jury returned no indictment against Darren Wilson, the killer of Michael Brown, a lot of whitesplaining has taken place, mostly from non-lawyers who deliberately or ignorantly misapprehend what a grand jury is and how it works. That’s before we get to Darren Wilson’s unvetted story.

Here are three facts: there was no trial, there was no verdict, and Darren Wilson was not found innocent, much less “not guilty”.

In that time, there have been protests both peaceful and violent, and I’ve seen many commentators dismiss the rioters as “animals” and “thugs”, or worse.

Rioting, however, doesn’t happen in a vacuum.

From the Buffalonian, via Reddit, here is a summary explaining why African-Americans on Buffalo’s East Side rioted in the summer of 1967.

Looking at and considering the reasons why people riot isn’t the same as excusing it or condoning it. But if we want to stop violence like that from happening again, perhaps we – as a society – could consider what’s working, what isn’t, and why the problems identified in 1967 persist so pervasively to this day.

The Ferguson riots didn’t happen in a vacuum. It doesn’t matter anyway, because even when African-Americans have the audacity to protest peacefully – whether in Buffalo, Los Angeles, or St. Louis – there will be white people around to remind them that they’re being uppity, and that it’s not at all their place.

Which is it? That they should protest peacefully, or that they should STFU and not protest at all because a “jury” reached a “verdict” that Wilson was “not guilty”?

People in Ferguson were angry there won’t be a trial. Courtesy of PBS Newshour, here is why there should have been a trial. Not a guilty verdict – just a trial.

Maybe that’s why people in Ferguson reacted violently – years’ worth of frustration, sparked by apparent and perceived injustice. 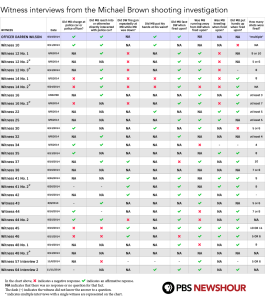 The grand jury in Ferguson did not indict Darren Wilson for any crime in connection with the homicide of Michael Brown.

Darren Wilson wasn’t on trial; the grand jury was not charged to find him guilty or not guilty.

Their only authority was to determine whether probable cause exists to hold him over for trial on any of a number of crimes. For the life of me I can’t fathom why the altercation with Michael Brown – as described – necessitated emptying a clip into him, and asking a law enforcement officer to answer for that to a jury seems to me to be a reasonable thing.

A kid who stole some cigars doesn’t deserve to die like a dog in the street. A kid who was rude to a cop, or walking in the middle of the street doesn’t deserve to be shot to death. The list of non-lethal ways to deal with any of those situations boggles the mind. Perhaps Officer Wilson could have just waited for backup before confronting two suspects by himself. If we take Wilson’s account at face value – right down to the description of Michael Brown’s face as “demonic” – Brown deserved to be arrested and prosecuted; not shot and killed.  Unfortunately, Brown’s side of the story will never be told. From the New York Times,

Some witnesses said that Mr. Brown had his hands in the air. Several others said that he did not raise his hands at all or that he raised them briefly, then dropped them and turned toward the officer. Others described the position of his arms as out to the side, in front of him, by his shoulders or in a running position.

Those differences in witness testimony is why you have a trial. Jaywalking and petty larceny don’t justify 12 – TWELVE – bullets being fired at an unarmed man. Read this summary of the account of Dorian Johnson, who was walking with Brown at the time.

The prosecutors control the grand jury process and the old adage that a prosecutor could get a grand jury to indict a ham sandwich is not unearned. Indeed, it is exceedingly rare for a grand jury to not indict someone. Although this grand jury had more leeway to conduct its own investigation, because it’s a law enforcement production, there will forever be a taint on a process where all of a sudden a cop is not indicted for what many perceive to have been an unreasonably excessive use of force under the circumstances.

It would have been nice for the family and the community for that question to be tried to a jury, rather than aborted at the indictment stage.

Finally, although I don’t see any reason to believe that Darren Wilson shot Michael Brown because he was black, I see a lot of palpable racism being directed at Brown and his family online. Any way you slice this, the homicide of Michael Brown was an unnecessary tragedy.

The Ferguson police department and the actions of Officer Wilson are under federal investigation, and Brown’s family will have recourse through the civil legal process.