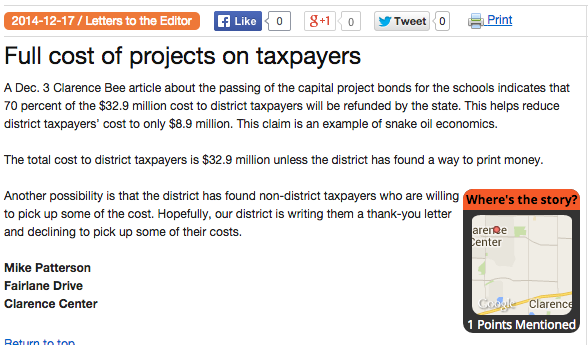 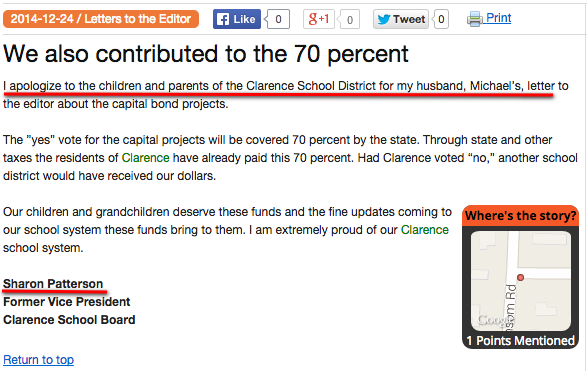 ***NOTE: CLARENCE SCHOOLS ARE CLOSED TUESDAY NOVEMBER 18TH.  THE VOTE WILL TAKE PLACE ON THE NEXT OPEN SCHOOL DAY. ***

If you live in Clarence, Tuesday is election day. I’m willing to bet a lot of people aren’t aware of that fact. If you’re involved in any sort of sports league or club, you probably know. If you pay attention to the goings-on at the board of education you know. If you’re on any of the several mailing lists that local school support groups or PTOs cultivate, you probably know.

From 7am – 9pm on Tuesday November 18th, Clarence taxpayers have a unique opportunity to have the whole state pick up 70% of the bill for making necessary improvements, repairs, and upgrades to the school districts’ buildings and grounds. The vote takes place where school budget votes always do – in the High School Gymnasium, in the back of the building off Gunnville Road. Students will be asked to park in a neighboring lot to accommodate local voters.

There are two propositions on the ballot. Here’s an ad that Fix Clarence Schools (with whom I was involved) published in last week’s Clarence Bee:

Almost all of the cost goes to make repairs and upgrades to the school buildings, many of which have not had significant capital improvements or repairs in four decades. The general maintenance bond will finance things like new roofs, asbestos abatement, improved security systems, updated alarm systems, technology upgrades, and updates to old, inefficient, and potentially hazardous electrical and HVAC systems. Interest rates remain at historic lows, the district’s most recent Moody’s rating is Aa2 (prime), and local taxpayers will only shoulder 30% of the direct cost – the remaining 70% will come from a state allocation.

Some people balk at the 30/70 split, because the 70% still comes from taxpayers via Albany. but that 70% from Albany is already budgeted-for and allocated: either we get it, or someone else will. It’s made up of tax revenue from individuals and businesses from throughout the state – from Scarsdale to Plattsburgh and everywhere in-between. Plus, the money is getting spent one way or another, and given the acute need for Clarence’s physical plant, it would downright negligent to not apply for this funding.

The second bond proposal is much smaller, and its passage is contingent on passage of the general repair bond. Here, Clarence taxpayers are asked to finance 30% of the cost of three separate artificial turf fields at the High School. The reason why this is necessary was perfectly illustrated during the 2013 – 2014 school year, during which 140+ games had to be rescheduled due to unplayable fields. To make matters worse for taxpayers, these fields were unplayable despite the cost associated with maintaining them.

With the introduction of modern artificial turf, the district will have three fields that will be playable in any conditions, so long as there’s no lightning. With the installation of the turf come improvements to the fields’ drainage systems, and once installed, the cost to replace the actual playing field is a fraction of what the initial placement costs.

The three fields will be the football stadium (whose treacherous bleachers, dilapidated press box, and antiquated scoreboard will be replaced under the general repair bond), a multi-use field, and the varsity baseball diamond.

Here is what the fields looked like in Spring 2014:

People in the community have raised valid concerns about this. The first has to do with the turf infill – an NBC report that came out a few weeks ago broadcast allegations that the use of crumb rubber infill (which keeps the artificial grass blades upright and cushions the playing field) may have contributed to cancer in some players in the Pacific Northwest. Every study that has been done on crumb rubber, which is made from recycled tires, has shown this infill to be perfectly safe, and no study exists to establish a causal link between crumb rubber infill and cancer. Nevertheless, the district takes this very seriously and has many available, within-budget alternatives to crumb rubber that it will consider before construction begins. These include sand, virgin rubber, “Envirofill“, and cork.

The second concern that some have raised has to do with the district’s recent history of budget problems and what many believe to be a catastrophic loss of teachers, courses, and social workers. Why aren’t we issuing bonds to help pay to restore these people and programs? Unfortunately, we can’t. Firstly, the 70/30% financing ratio is only valid for capital building and repair projects such as the ones contemplated here. The district cannot issue a bond – much less one for which the state will cover the majority – to restore items to its operating budget. We don’t just need these teachers and programs for one year, but every year.

Think of it this way: we can issue a bond to buy the Keurig machine; we can’t use it to buy coffee capsules. But if we bond to make these repairs at 30% of the cost, that may likely free up future yearly operating budgets whereby money that would have been allocated to make piecemeal repairs to problem areas can now be reserved for teaching and counseling.

Every way you look at this, it’s win:win for taxpayers and the district.

The cost of both bond proposals for a typical $200,000 home in Clarence will be $46 per year; about $3.83 per month.  Remember – your STAR exemption, which is enhanced for seniors, reduces your taxable assessed value.

If you’re a Clarence taxpayer, resident, homeowner, parent, alumni, and current student of voting age, I hope you’ll make the trek out in what promises to be some inclement weather, and vote YES on Tuesday, November 18th to Fix Clarence Schools.