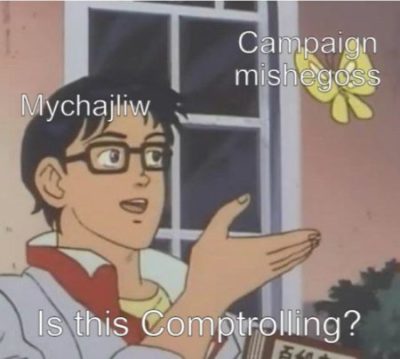 The Republicans are fighting about which of their Sheriff candidates is MAGAier. Here comes Stefan Mychajliw to offer his ethical and fiscal clarity, such as it is.

Oh, and here comes Bob McCarthy to simply transcribe and publish whatever Mychajliw tells him, without checking it first.

On one side we have Somethingorother Garcia, who switched parties a few times and voted in the Democratic primary in 2016. So not MAGA!

On the other side we have Somethingorother Healy-Case who also switched parties even more times, but did not vote in the Democratic primary in 2016. OMG MAGA!

Anyhow, Mychajliw, gearing up to lose a town supervisor’s race in a landslide, sweatily called Bob McCarthy to tell him:

In a routine review of county expenses, Comptroller Stefan I. Mychajliw Jr. said he is scrutinizing payments of $282,037 since 2015 to 716 Security and Investigations, partly owned by Garcia.

Mychajliw has spent much of his recent tenure as “Comptroller” no-showing and launching little culture war catfights. There exists no place on earth and no person with a brain who suddenly believes that Mychajliw – who doesn’t know how to do the job from which he has absented himself – undertook a “routine” review of county contracts with a current candidate for office. It insults everyone’s intelligence and quite obviously so. But what McCarthy wrote next is simply amazing:

Mychajliw, also a Republican, emphasized that he has taken no position in the hotly contested primary race featuring Garcia and Karen L. Healy-Case, the endorsed party candidate.

Now, this is a lie. To clarify: I have no doubt that Mychajliw opened his gob and told Bob McCarthy this lie. What is doubly egregious, however, is that McCarthy and the Buffalo News did not see fit to double-check Mychajliw’s assertion that he had “taken no position” in the Sheriff’s primary race between Garcia and Healy-Case.

Had McCarthy or his editor undertaken a simple check of the state election website, he would have discovered the $100 donation Mychajliw made to Healy-Case in late March 2021.

Mychajliw can support whomever he wants, but it is an abuse of his power to use his state-sanctioned office to target political opponents for special scrutiny or persecution. It is just as much an abuse of power as Trump pulling reporters’ phone logs or Mychajliw using the Comptroller’s office to issue what amounts to a campaign press release. I guarantee you that the Erie County Comptroller has no say or authority over what the state does with its state and federal funding for the Skyway.

Mychajliw also noted that the payments pose “numerous issues and concerns” for Garcia, especially should he win election as sheriff and profit through the county.

“There could be a serious conflict if he is potentially sheriff and privately benefits from a job his office can handle to begin with,” he said.

So, Mychajliw is not accusing anyone of malfeasance, but merely suggesting that there is a potential conflict of interest. “Could be” and “potentially” are the weasel-word clues. Garcia responded he would sever his relationship with that company if he should win, so what is the problem?

The problem is that Stefan Mychajliw used his public office to do the Healy-Case campaign’s bidding and generate some mailer copy for it.

It is time for this shamefully opportunistic serial candidate to be retired to the dreaded private sector.