What Is A Clerk?

Kearns is Erie County’s clerk; not an Erie County legislator. His job is purely ministerial; he is not given power to set policy, nor is he granted any sort of discretion in performing his duties. His job is to issue licenses, record and file paperwork, and that’s about it. More to the point, there is literally nothing within the clerk’s power that gives him authority over immigration law enforcement.

What does Kearns care about immigration—documented or not? We live in a region that has been shrinking for decades. Who, exactly, is threatened here by any sort of immigration? Someone who overstayed their visa is enemy number one? This is utter nonsense.

What this really amounts to is treating migrants as outlaws to pwn the libs.

The oath of office for the county clerk is: “I do solemnly swear…that I will support the constitution of the United States, and the constitution of the State of New York, & that I will faithfully discharge the duties of the office of Erie County Clerk according to the best of my ability.” Where does it say that Mickey Kearns gets to decide which laws to carry out? Where does it deputize Mickey Kearns as an immigration officer? Where does it say, “except for the Messicans”?

It’s a license to drive—if the person fills out the forms and passes the tests, honestly, who is being harmed by this? What he’s promising to do is to not “faithfully discharge” his duties as clerk and issue licenses to people because of their visas.

He is threatening to break the law to stick it to lawbreakers; the logic of cretins.

Maybe stop treating immigrants as “animals” and criminals. Their visa status is literally none of your business. It may play well with your new Republican and Conservative fusion masters, and it may fend off a registered Republican’s primary against you, but you’re just a hateful disgrace who doesn’t understand his oath or his authority. 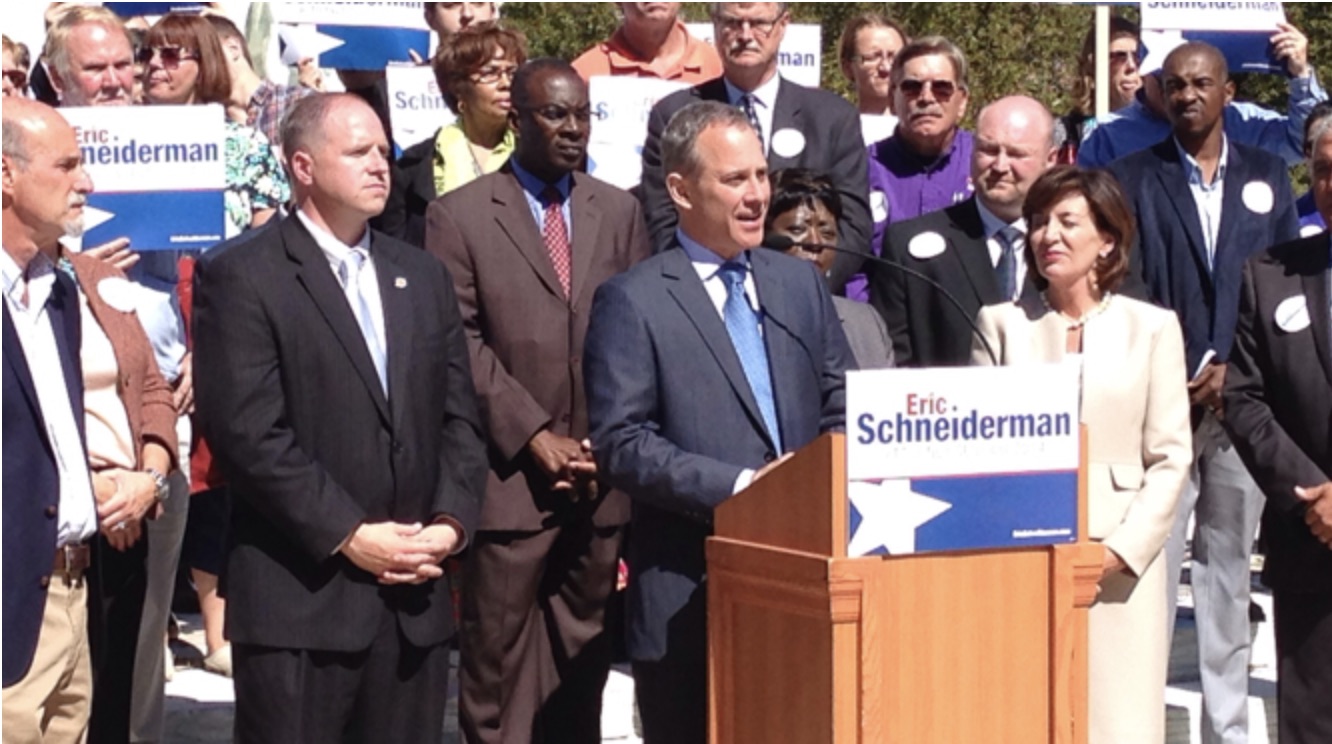 Attorney General Eric Schneiderman will resign today after a blockbuster expose in the New Yorker revealed four women’s credible accusations against the state’s top cop of abuse and harassment in several of his personal relationships. Schneiderman is a former state Senator and was elected Attorney General in 2010, and re-elected in 2014. His resignation leaves the AG race wide open, and the legislature will select an interim AG to serve out his term.

It is a shocking fall for the man whose office prosecuted everything from the Steve Pigeon crew’s electoral racketeering to the Trump University fraud, and who has worked since Trump’s election to lead other Attorneys General in countermanding the dismantling of environmental and other regulations.

When the New Yorker first released its article, Schneiderman released an odd statement about “role playing”, but within hours submitted his resignation after, e.g., Governor Cuomo demanded it; there was no way forward through this, given the seriousness of these on-the-record allegations.

It is right and good that we hold our most powerful people – and in the case of Schneiderman’s public acts, our best political actors – to high standards.