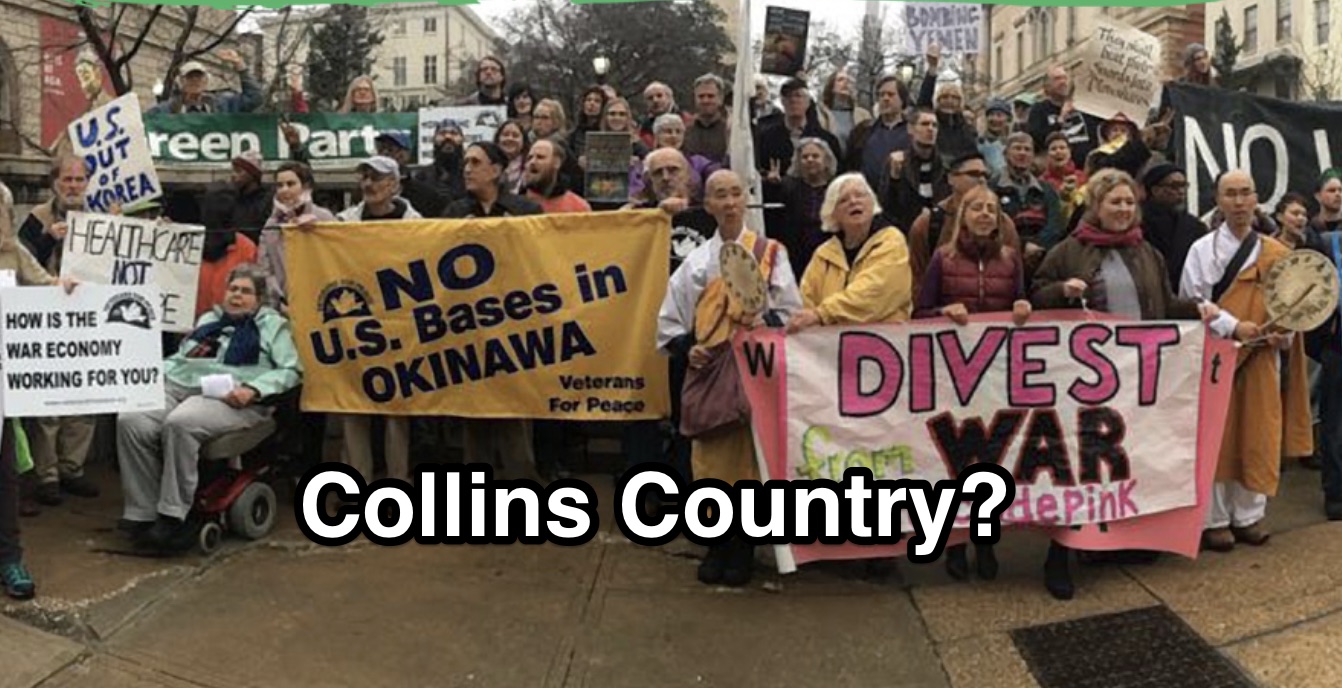 Did you hear the news? Mike Zak is running for Congress on the Green Party line.

No, not that Mike Zak, the Green Party member and environmental entrepreneur who helped to start a “Gro-operative” for sustainable food production.

In a dramatic display of weakness and fear, the Chris Collins for Congress campaign recruited a MAGA white power guy to run on the Green Party line. This is a typical game the Republicans play because evidently, having the Conservative Fusion Party line, and the so-called “Independence Party” line locked up just isn’t enough. The re-election of Chris Collins will depend, at least in part, on Republican apparatchiks collecting petition signatures for some hand-picked goon who will do nothing but squat on the Green line. The strategy preys on people’s ignorance, and they can count on maybe 1 – 2% of the left-of-center electorate to fill in the green ovals on their ballots.

The Green Party, for its part, is sick and tired of Republicans co-opting their line. It’s not the first time it’s happened. In 2016, the Greens went to court over the Republican hostile takeover of their party line. They should do so again. After all, the four pillars of the Green Party platform are “peace, ecology, social justice, and democracy”.

Collins and his coterie of disingenuous goons talk a big game, but actions speak louder than words. They’re afraid this year. The Democrats are going to vote for McMurray, and the hardline Conservatives will vote for Trump’s reliable TV shill, Collins. But there’s a mushy area in the middle of the (R) constituency that doesn’t like Collins and really doesn’t like Trump.

It’s hard to know whether these are, e.g., suburban parents who don’t like taxes but really don’t like kids getting shot in schools, evangelical types who don’t like the pornstar payoff eruptions, or whether it’s people with Infowars stickers on their car bumpers who hate interventionism. Either way, Collins doesn’t have the entirety of the district’s right-of-center electorate nicely tied up in a bow; he has a sale to make this year, and Trump isn’t the key. Instead, he will try and paint McMurray as an effete liberal “Obamapelosi” Democrat who is coming for your guns, and stealing the Green Party line is just a convenient, extra hedge.

If Nate McMurray is the joke they accuse him of being, they’d be ignoring him; but the Collins crew’s attacks on McMurray have been vicious and relentless, and this sort of behavior is by no means what one would expect from a Republican candidate in a safe Republican district. Sort of like calling earnest high school kids “radical partisans”, Collins is known for hyperbole that’s as breathless as it is disproportionate. The totality of what’s going on reveals that they’re spooked by this year’s numbers, and they know McMurray has a shot, remote though it may still be. They know that it wouldn’t take very much for McMurray to reveal himself to be a reasonable, middle-of-the-road candidate who, above all, isn’t afraid to put himself in front of people who are predisposed to disliking him and his policies. Unlike Collins, who cowers in abject horror at the thought of listening to a middle-schooler advocating for the right to not be shot in math class, McMurray will talk and listen to anyone.

In 2015, Republican committee chairman Nick Langworthy himself collected petition signatures for someone to squat on the Green Party line in a county legislative race. Republicans did the same thing to Amber Small in the SD-60 race in 2016. Even Ted Morton did it in 2015. The Green Party does not play the fusion game – they do not issue Wilson-Pakulas granting non-members permission to run on their line. Instead, Republicans take advantage of the “opportunity to ballot”, which allows non-members to run on the line of a party to which he does not belong. Even better? Just find some dupe to register as a Green voter and go out and collect petitions.

That’s what Collins’ crew did this month. They found Mike Zak – not the Buffalo eco-startup guy, but a West Seneca version who shares – publicly – Trump memes and ‘white lives matter’ stuff on his Facebook page. Mr. Zak registered as a Green on or about April 5th. His petitions – 77 signatures in all – were exclusively circulated by Republican patronage hires; he needed 66.

Ross Kosetcky is the designated contact for Mr. Zak’s petition filing, and he collected fully 63 of the 77 submitted petition signatures. He is a member of the Republican staff at the Erie County Legislature, and was an alternate delegate to the 2016 Republican National Convention, the year he ran on the Republican line against Crystal Peoples-Stokes for the State Assembly. Dennis Ball, a member of the Aurora Republican Committee, collected signatures for Zak’s candidacy when he wasn’t collecting checks for Collins fundraisers (link now deleted) or the Director of Operations at the Erie County Water Authority.  The remaining signatures were collected by someone from Niagara County whose signature is illegible, and Brian Pollner, the “director of operations” for the Republican County Legislators, and a full-time employee of the County Legislature’s Republican Caucus; he is a co-worker of Kosetcky’s.

Mr. Zak, the nominal Green “candidate”, did not obtain a single petition signature. His own wife didn’t sign a petition for him; not a single signature was collected for him in his hometown of West Seneca, mostly because he lives in Higgins’ district, and not in Collins’. (So much for the “McMurray is a carpetbagger” argument). A former West Seneca school board candidate reached out and recommended a glance at Zak’s Facebook. This is the person whom Collins hand-picked to help his candidacy, and I have to assume that he endorses all of this.

Here’s the origin of the whole “it’s OK to be white” meme. None of this exactly screams “Green Party”.

As an aside, in 2010, we needed sources to provide us with Carl Paladino’s emails. In 2018, people just have these things hanging out on their publicly accessible Facebook accounts.

Upon learning of this latest party-raiding scam, McMurray reached out to the Green Party, and posted this:

…I spoke to Eric Jones, Chairman of the Erie County Green Party, and he shares my shock, horror, and disappointment—they especially do not want to play spoiler for Collins
· You see, this race could be close, and the two or three percentage points that might go to the Green Party could possibly take votes away from me.

Why is this wrong?

· If the evidence available is correct, it is not only terribly shocking that the GOP and Collins would circulate petitions in this manner, but that they would do it for this particular man
· Specifically, people who likely hate the Green Party lied to Green Party members by going door-to-door and telling unsuspecting people, “We have a great candidate we want to get on the ballot, do you mind signing?”
· This does not happen in most jurisdictions
· It happens mostly in Erie and Niagara County
· It is the unethical act of a strong party (and wealthy candidate) taking advantage of the Green Party
· It’s also anti-Democratic, because they are trying to fool voters

What can we do?

· I will petition to open the ballot, which means we are collecting signatures this weekend
· Even if I get enough signatures, however, my name will not appear on the ballot
· Green Party members will have to write my name in
· Spread the word—don’t let them get away with this scam

Transparency and an aversion to trickery and cheating. What a refreshing thing from a Congressional candidate.

Chris Collins and Mike Zak are united in interest, and one has to assume that Collins’ crew of bright young Republican stars checked out and vetted their surrogate. There is no sunlight between Collins and Zak, the anti-McMurray partnership.

Erie County Green Party officers and members are greatly disturbed by the actions of local Republican operatives acting on behalf of Congressman Chris Collins to place a fake candidate on the Green Party line in the 27th congressional district. These operatives misled Green Party members into signing a petition for a candidate who does not represent the Green Party.

The candidate in question has been identified as a supporter of right wing causes who only recently registered as a Green for the sole purpose of stealing the line. He does not represent in any way our party’s four pillars: Ecological Wisdom, Social Justice, Grassroots Democracy and Non-Violence.

By filing this petition Chris Collins and the local Republican Party have shown voters how they truly feel about democracy. They would rather trick residents of the 27th congressional district into voting for a false candidate than provide them with an honest election. This would be a deplorable action for any candidate, but it is especially so for a sitting member of Congress.