About the Referendum Questions 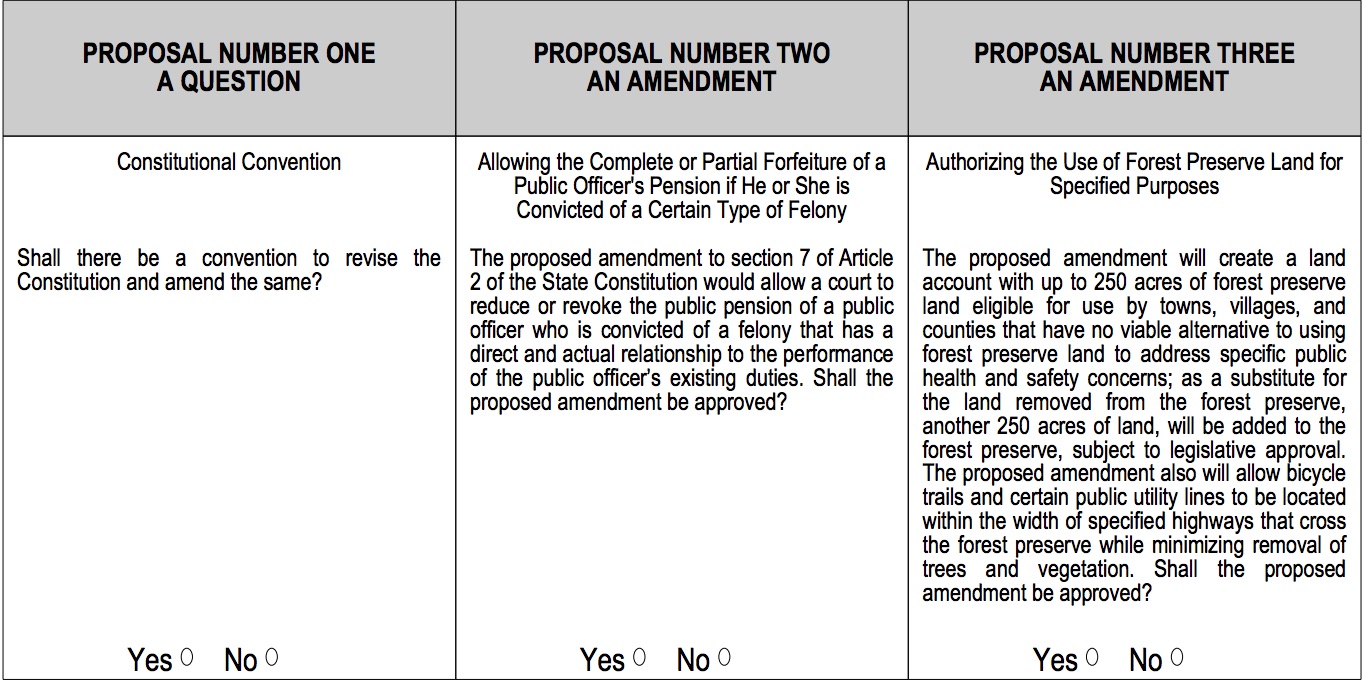 Shown above is the flip side of your SAT-formatted Scantron New York State ballot. Be sure to flip over the ballot and mark these three referendum questions.

These are not endorsements by the staff or editors of the Public: these are my opinions alone.

Every 20 years, the electorate is asked whether it wants to convene a Constitutional Convention. Practically every single influence group in Albany – especially the public sector unions – are calling for a “no” vote, and so has Governor Cuomo. Yet here’s what Cuomo said at the Democratic Convention in Rye Brook in 2010:

Deeds, not words, to clean up Albany. Need a people’s constitutional convention to change the rules. #nydemcon #Cuomo

Now he says he’s against it. So is every person and group that has an interest in preserving Albany’s status quo. I believe Albany is broken and this hurts New Yorkers in every region, of every class, race, and political persuasion.

I have been writing about Albany dysfunction for over a decade, and literally no one in Albany has really undertaken any serious reform of the way in which that town works. (See: Moreland Commission). Dissolving that Moreland Commission wasn’t illegal, but it was disgusting to me that its existence could be ended so cavalierly as a bargaining chip in budget negotiations. I consider anti-corruption reform to be important enough to carry through without regard to day-to-day political expediency. NYU’s Brennan Center pretty much provided a roadmap to reform years ago, to no meaningful avail.

I tweeted this last week:

I’m voting yes on the NYS Constitutional Convention because Albany. is. broken., and it’s because of the person there whom you like.

Even the guy you like is part of the problem in Albany, and there exists no political will to change it. Albany is a place incumbents generally depart only in chains or disgrace. Things like three (four?) men in a room, the way in which Albany’s legislative bodies are seldom genuinely deliberative, unfunded mandates, the abuse of public Authorities in order to render opaque public funding and borrowing: all of these things contribute to New York’s difficulties, especially upstate.

I have written countless times about the fundamental corruption of New York’s electoral fusion system, whereby microscopically small political “parties” cross-endorse major party candidates to fool the populace and/or to secure patronage favors. It’s enough: no more Wilson-Pakulas, no more fusion, no more tricking people who want to register as “unenrolled” to register for the rudderless, meaningless “Independence Party”.

There is a lot of propaganda scaring people about how awful the Constitutional Convention would be, but don’t forget:

If a majority statewide votes “yes,” a constitutional convention will be set for the spring of 2019. The convention would be made up of elected delegates, with three provided from each state senate district — there are 63 in total — plus fifteen statewide. Elections would occur next year, and anyone can run to be a delegate.

2019 would be the first Constitutional Convention since 1967, and nothing came of that – voters rejected every proposal that came along.

Good Government group Citizen’s Union has advocated in favor of a Constitutional Convention. I once wrote a series of articles advocating for New York to adopt a Nebraska-style non-partisan, unicameral legislature. I still think that Albany needs to serve its constituents better, and that Albany needs to stop relying on county and local governments to raise taxes to pay for its mandates, and figure out ways to fund its own plans from the state at-large. I believe that state service entities such as the DOT, the MTA, and Thruway Authority need to be more transparent and modernize in order to better serve the public.

A Constitutional Convention cannot – by law – take away union members’ pensions or benefits.

If there was a genuine movement to reform Albany and the way it does business, I’d probably think that a Constitutional Convention was unnecessary. There isn’t, so I don’t.

This proposal asks you whether you think it’s ok that a public official who is convicted of – and removed from office – for a felony relating to the performance of his official duties should lose his rights to a state pension. Think Sheldon Silver taking over $4 million to influence his actions as a legislative leader. I’m for it, but it’s just window-dressing. Sheldon Silver’s and Joe Bruno’s convictions were overturned on appeal because the Supreme Court in a 2016 Virginia case made it extremely difficult – if not impossible – to successfully prosecute these types of bribery cases.

Chief Justice John G. Roberts Jr., writing for the court, narrowed the definition of what sort of conduct can serve as the basis of a corruption prosecution. He said only formal and concrete government actions counted — filing a lawsuit, say, or making an administrative determination. Routine political courtesies like arranging meetings or urging underlings to consider a matter, he added, generally do not, even when the people seeking those favors give the public officials gifts or money.

That still leaves prosecutors plenty of room to pursue classic bribery and kickbacks. But there was widespread agreement among prosecutors and defense lawyers on Monday that the decision would make it harder for the government to prove corruption.

New York’s massive forest preserves (Catskills, Adirondacks, e.g.) have a mandate to preserve wild land but also accommodate people and businesses who live and work there. It’s a delicate balancing act, but this creation of a land bank would make it easier for municipalities to make changes for health and safety. From the measure’s summary:

New York State’s Constitution protects the State’s forest preserve as wild forest land and generally prohibits the lease, sale, exchange, or taking of any forest preserve land. The proposed amendment will create two new exceptions to this broad protection of the forest preserve to make it easier for municipalities to undertake certain health and safety projects.

First, the proposed amendment will create a land account of up to 250 acres of forest preserve land. A town, village, or county can apply to the land account if it has no viable alternative to using forest preserve land for specified health and safety purposes. These purposes are (1) to address bridge hazards or safety on specified highways; (2) to eliminate the hazards of dangerous curves and grades on specified highways; (3) to relocate, reconstruct, and maintain highways; and (4) for water wells and necessary related accessories located within 530 feet of a specified highway, where needed to meet drinking water quality standards. The State will acquire 250 acres to add to the forest preserve to replace the land placed in the health and safety land account, subject to approval by the Legislature,

Second, the proposed amendment will allow bicycle paths and types of public utility lines to be located within the widths of specified highways that cross forest preserve land. The work on the bicycle paths and utility lines must minimize the removal of trees and vegetation. The proposed amendment will allow a stabilization device (such as a guy wire) for an existing utility pole to be located near the width of a highway when necessary to ensure public health and safety and when no other viable option exists. The proposed amendment prohibits the construction of a new intrastate gas or oil pipeline that did not receive necessary state and local permits and approvals by June 1, 2016.

Polls are open until 9pm, and I will be on WGRZ Channel 2 tonight to provide commentary. Turnout is key today, so make sure you and everyone you know gets out to vote.