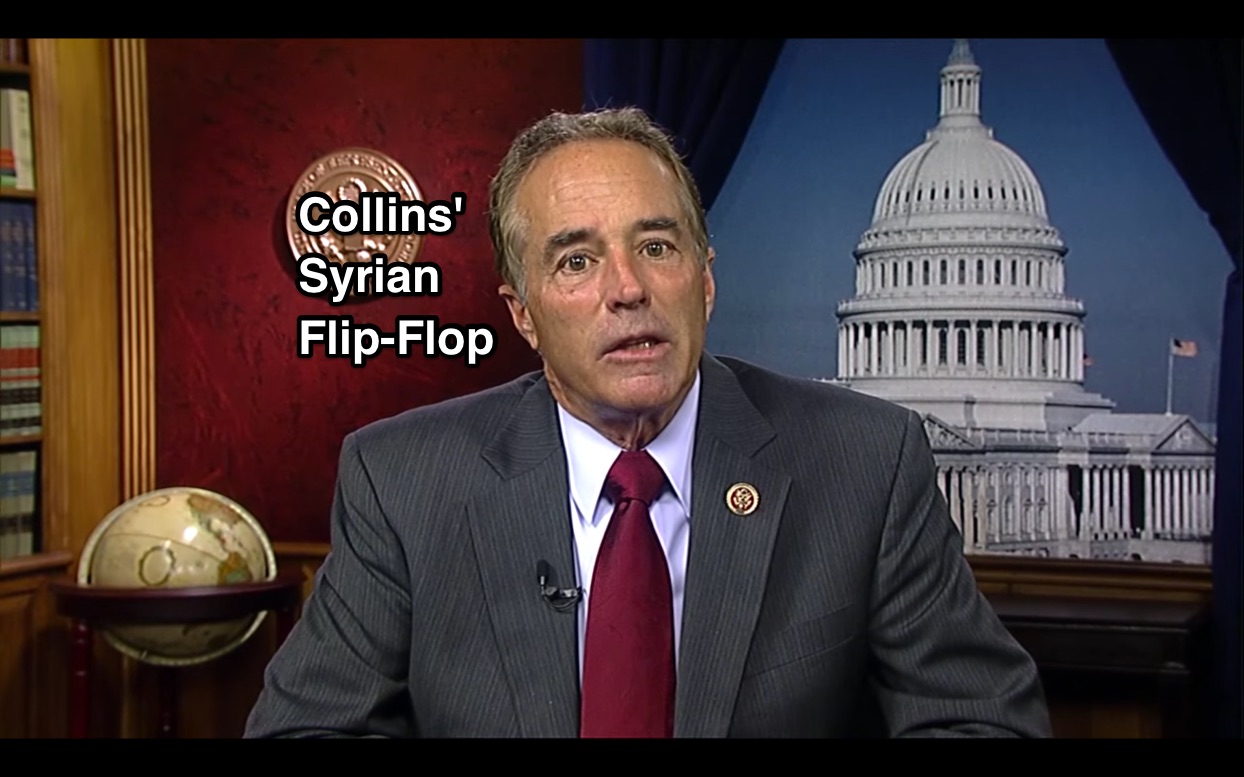 In April 2017, Congressman Chris Collins uncritically cheered President Trump’s military strike against Syria – the same type of action that President Obama had proposed in 2013, and which Collins vehemently opposed as “ill-conceived”. Is there some substantive difference, or is it just a craven partisan about-face?

Collins’ obsequiousness in the face of Trump’s missile strike is informed only by naked partisanship and the Republican policy of de-legitimizing President Obama not only as President, but de-humanizing him.  Chris Collins’ positions can be summarized as: Trump good, Obama bad, even when the topic at hand is practically identical.

“It is not in the national security interests of the United States to ignore clear violations” of what he called an “international norm” banning the use of chemical weapons, Obama said at a meeting with visiting heads of Baltic nations Lithuania, Latvia and Estonia.

He called the Syrian attack a “challenge to the world” that threatens U.S. allies Israel, Turkey and Jordan while increasing the risk of such weapons falling into the hands of terrorists.

Our NATO allies, however, preferred that any military action first be sanctioned by the United Nations Security Council; however, it had failed to act, in part, because of the Russian veto. Domestically, some Congressmen signed a letter asking that President Obama seek Congressional approval before any military action.

Chris Collins (NY-27) also demanded that President Obama seek Congress’ okay before launching any naval strike on Assad. In a press release dated August 28, 2013, Collins cited his belief that any military action would, “impact the ongoing civil war within Syria, but possibly have ramifications throughout the region”.

Within days, President Obama acquiesced to demands that he first consult with Congress.

In one of the riskiest gambles of his presidency, Mr. Obama effectively dared lawmakers to either stand by him or, as he put it, allow President Bashar al-Assad of Syria to get away with murdering children with unconventional weapons. By asking them to take a stand, Mr. Obama tried to break out of the isolation of the last week as he confronted taking action without the support of the United Nations, Congress, the public or Britain, a usually reliable partner in such international operations.

“I’m prepared to give that order,” Mr. Obama said in a hurriedly organized appearance in the Rose Garden as American destroyers armed with Tomahawk missiles waited in the Mediterranean Sea. “But having made my decision as commander in chief based on what I am convinced is our national security interests, I’m also mindful that I’m the president of the world’s oldest constitutional democracy.”

Congressman Collins responded on August 31, 2013, again citing that any military action against Syria could have regional ramifications.

In the ensuing days, Russia intervened on behalf of its longtime client, Assad, and war was averted through a deal whereby Assad would destroy his chemical weapons under Russian supervision. It was a weak response that only served to strengthen Assad – and Russia’s influence in the immediate region – and gave Republicans in Washington an excuse to reject Obama’s half-hearted request for military authorization.

Congressman Collins, like most of his Republican peers, used the Russian “diplomacy” as a partial excuse to tell Obama to pound salt. He released a statement indicating that he would not vote to authorize Obama’s proposed missile attack to punish Assad for his deliberate chemical targeting of civilians, adding that he was “unconvinced” that any such strike would be in America’s “best interests”.

Characterizing President Obama’s plan to launch a targeted missile strike in Syria as “ill-conceived”, Collins demanded that any such request for military action include a “clear set of objectives” and a “clear exit strategy”.

Collins even released a video:

In the ensuing three years, America took a hands-off approach to Syria, arming anti-Assad rebels who found themselves battling each other, Assad, and ISIS. ISIS ran roughshod throughout northeastern Syria and northwestern Iraq, and its tyrannical horrors became emblematic of the worldwide disease of jihadist terrorism. Russia intervened militarily on behalf of the Assad regime, and the US and Iraq intervened to back, among others, Kurdish fighters battling ISIS.

In the last sentence of his news conference later Thursday with Turkish counterpart Mevlut Cavusoglu, Tillerson said the “longer-term status of President (Bashar) Assad will be decided by the Syrian people.” That is a highly significant departure from the long-time stance of the Obama administration, which always insisted the Syrian dictator — accused of killing thousands of his own citizens in indiscriminate bombing — must step down as part of any negotiated political solution to the crisis.

Last week – a few days after Tillerson’s declaration – Assad’s regime again launched a chemical weapons attack targeting civilians. Had Assad actually destroyed his chemical stockpile? Apparently so, according to the team of international inspectors sent to monitor the situation. The Sarin that Assad used was either hidden from inspectors, or part of a fresh batch. This article lays out the chemical realities of the creation, storage, and usage of Sarin. It is chemically difficult to store, so it is either synthesized in flight or shortly before being used. Based on Syria’s capabilities, it is most likely that it was a new batch.

To date, all of the nerve agents used in the Syrian conflict have been binary chemical warfare agents, so-named because they are mixed from several different components within a few days of use.  For example, binary Sarin is made by combining isopropyl alcohol with methylphosphonyl difluoride, usually with some kind of additive to deal with the residual acid produced.

President Trump launched a missile attack from US Navy ships last Thursday night without first seeking any Congressional approval. There was no statement of intent – no plan or exit strategy. In essence, President Trump revealed that this military action was brought about due to the emotions he felt while watching television images of the attack and its victims. Critics accused the Trump Administration of effectively green-lighting Assad’s attack on his own people; it was April Glaspie 1990 all over again.

In the absence of strategy or concern for the ramifications of action, Congressman Chris Collins, who is President Trump’s loudest and most consistent Congressional cheerleader, issued this statement:

Gone now is the hand-wringing over Constitutionality of Presidential military action. Absent are the concerns about how American intervention might adversely affect the Syrian civil war or regional stability. In essence, Collins was cheering for the exact same thing he had opposed three years earlier, with literally the only difference being who occupies the White House.

Trump’s missile attack? Within sixteen hours, Syrian jets were taking off from the base that had been targeted. Military expert Malcolm Nance noted that the Pentagon has runway busting munitions, but didn’t use them.

No plan, no strategy, no consultation, no effect, but Collins supports the same action Trump took that he denied Obama.

To my mind, Chris Collins’ is complicit in bringing about every “status quo” death and refugee arising out of the Syrian conflict since 2013. His flip-flop is anti-American partisanship at its most craven. Shame on him and his blatant absence of principles.