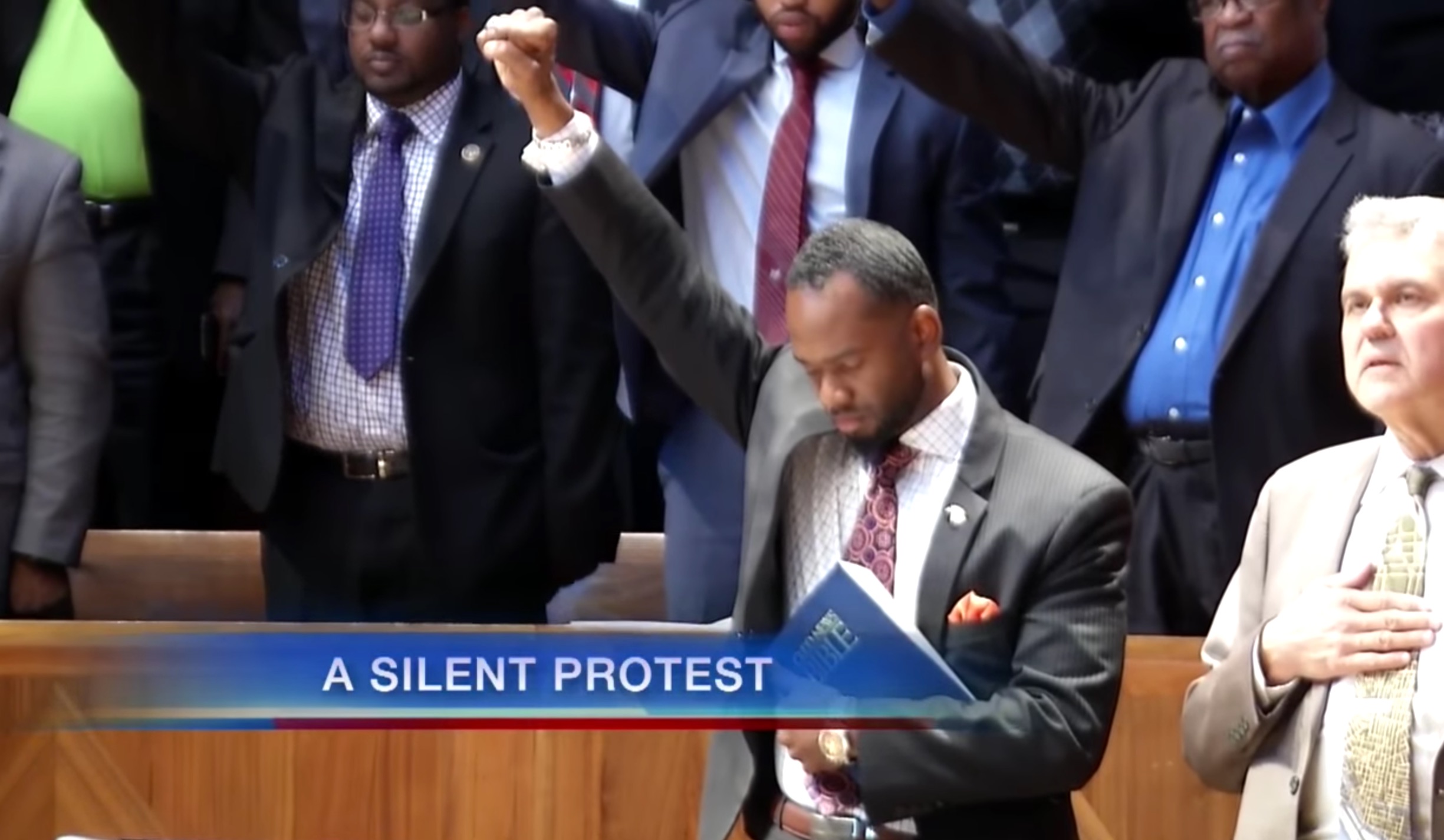 For the past several weeks, City of Buffalo Councilmember Ulysees Wingo has raised his fist in protest during the rote recitation of the Pledge of Allegiance at the beginning of council sessions. Wingo instead recites a prayer to himself. He began doing this after seeing the video of the homicide of Terence Crutcher, an unarmed African-American man with his hands up, who was shot by a Tulsa, Oklahoma police officer because of aggravated car breakdown while Black.

“That could have been me,” Wingo said. “Enough is enough. I’m tired. This country is tired. My people are tired. When is it going to stop? And it needs to stop now!”

Wingo, 36, said later that the Pledge of Allegiance phrase “indivisible, with liberty and justice for all” does not reflect the reality for many African-American citizens whom he said routinely face discrimination, racism and segregation in big and small ways.

“Clearly, the flag doesn’t mean the same thing to all people,” he said. “This is in response to every black person who has died without a weapon in their hand.”

It does seem quite astonishing that, for instance, the guy accused of setting off bombs in Manhattan can be subdued and arrested rather than killed, but Black men selling loose cigarettes on the street or for a traffic violation or being homeless or having car trouble end up shot dead, or arrested for sitting on their mom’s porch.

This being a free country, Wingo is perfectly within his rights to substitute whatever he wants for recitation of the pledge to the flag. You don’t have to like it, and you don’t have to agree with it. But it’s pure, unadulterated political speech and anyone who believes in the ideals that flag represents – the “Republic for which it stands – should – must – support Wingo’s right to protest.

On Thursday, Wingo posted an image of a letter he received from someone purporting to be a Buffalo Police Officer. It repeatedly calls Wingo a “nigger”. Wingo wrote this caption,

I didn’t read your letter– and I won’t. But I’ll have my very resourceful and loving residents of Buffalo read this letter for me. My staff DID inform me that you are law enforcement. You, SIR, are the reason I won’t stop protesting. If my fist in the air offends you, then YOU readily need to take an immediate introspective analysis of your life.

Now, to my black, brown, and white WNY family who acknowledges the need for me to keep going… JOIN ME in council chambers on October 18th at 2:00pm and show this —- how Buffalo will lead the nation in showing unity and solidarity. There’s definitely a lot of work to be done! Let’s get this work!!!

Here is the letter:

Cowardly white supremacy in full effect. Racist. Councilman Wingo’s point proven. This person purports to be a cop and walks drives around a town with a large minority population with an attitude like this against the people he’s sworn to protect. Buffalo hasn’t had any police shootings like the ones in other cities, so it wasn’t about you, buddy. Put your fragile white identity away. He even said that it’s not about you. Maybe pay attention.

As Mr. Wingo says, “there’s definitely a lot of work to be done”.