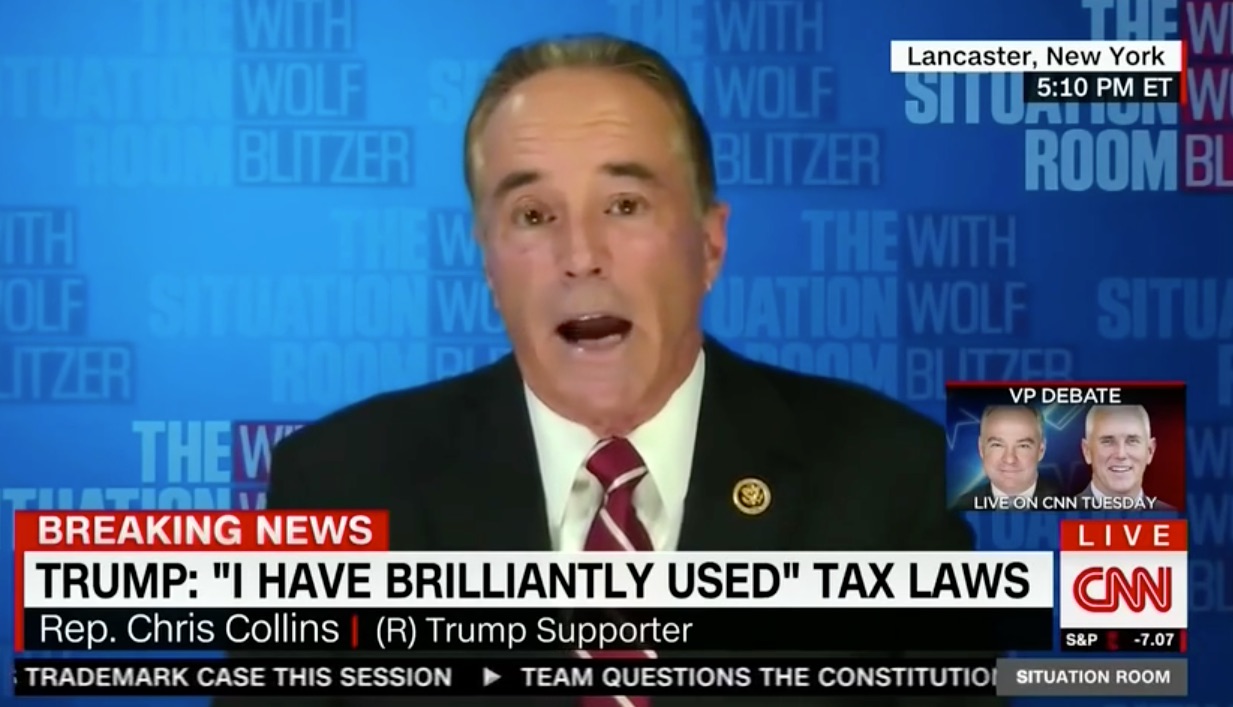 When Trump fanboy Chris Collins is challenged by a journalist, he loses his cool. Brianna Kielar pressed Collins on Trump’s taxes. While Collins wanted to talk about how Putin fanboy Trump would be tough on Putin or about all the fresh misogynist energy and new white supremacist blood Trump brings to our polity, Kielar wanted to push back on Collins’ suggestion that only she – and no one else – cared about what was in Trump’s tax returns.

A CNN poll reveals that 73% of the electorate cares. So, Collins and Trump are way out of touch.

This is really something to watch. Collins quite clearly isn’t up to the pretty light challenge. Some might remember that Collins, too, refuses to release his tax returns, preferring instead to “show” whatever he chose to the Buffalo News’ Jerry Zremski and Bob McCarthy. Transparency is anathema to Collins, who is too good to be bothered by the notion of an informed electorate. He thinks that his “competitors” would get sensitive information if he released his tax returns, but that never stopped other businessmen running for office from revealing their returns. This is what Collins said about his taxes and his refusal to release them, and it reveals everything you need to know about his attitude towards voters:

“My federal return is probably 25 pages long,” Collins added. “It’s too much for the public to absorb.”

While the electorate in NY-27 may be made up, in Collins’ mind, primarily of innumerate hicks like the Tops store manager who’s “not paying federal taxes”, that’s why we have journalists, who can use tax accountants to help parse the information in tax returns to determine whether our elected officials have any conflicts of interests, and whether they pay any federal income taxes at all.

On the issue of Trump’s tax avoidance, sure, no one pays more than they are legally required to pay, but that’s not the point. The point here is that this is a person who manipulates what amounts to a bespoke code for billionaire tax avoidance while dumb schmucks like you and I pay until it hurts. Remember: when Clinton confronted him with the probability that he didn’t pay any federal income taxes, he – uninvited – blurted that this made him “smart”. What it makes him is a freeloader. Not only is he such a piss-poor businessman that he lost a billion dollars in the casino industry and real estate during a growing economy with rising real estate values, but his completely absent business “acumen” allowed him to be worse than any “taker” Trump and his ilk have been denigrating for their low incomes and lack of federal tax exposure – the 47% Mitt Romney so casually denigrated in 2012.

Donald Trump is awful, yes. His manipulation of the tax code, by the way, doesn’t make him a “genius”, as his surrogates would have you believe. If anything, the genius is his accountant. The issue is that Donald Trump die-hards have their decision already baked in. Ditto the Clinton Democrats. As always, these contests come down to undecided voters in swing states. When a Donald Trump – awful as he is – is revealed to be a guy who not only didn’t pay taxes, but thinks that the reason you and I do is that we’re stupid, that won’t play well where and with whom it matters.

Collins subscribes to the whole maker/taker class warfare. Literally. Chris Collins reckons a supermarket store manager is so privileged that she doesn’t pay federal income tax. That is an actual thing that an actual federal representative said to a TV reporter on the record, on the air.

Go check out Diana Kastenbaum, the Democrat running in NY-27. She’s a businesswoman from Batavia who doesn’t treat the electorate as subjects or idiots.