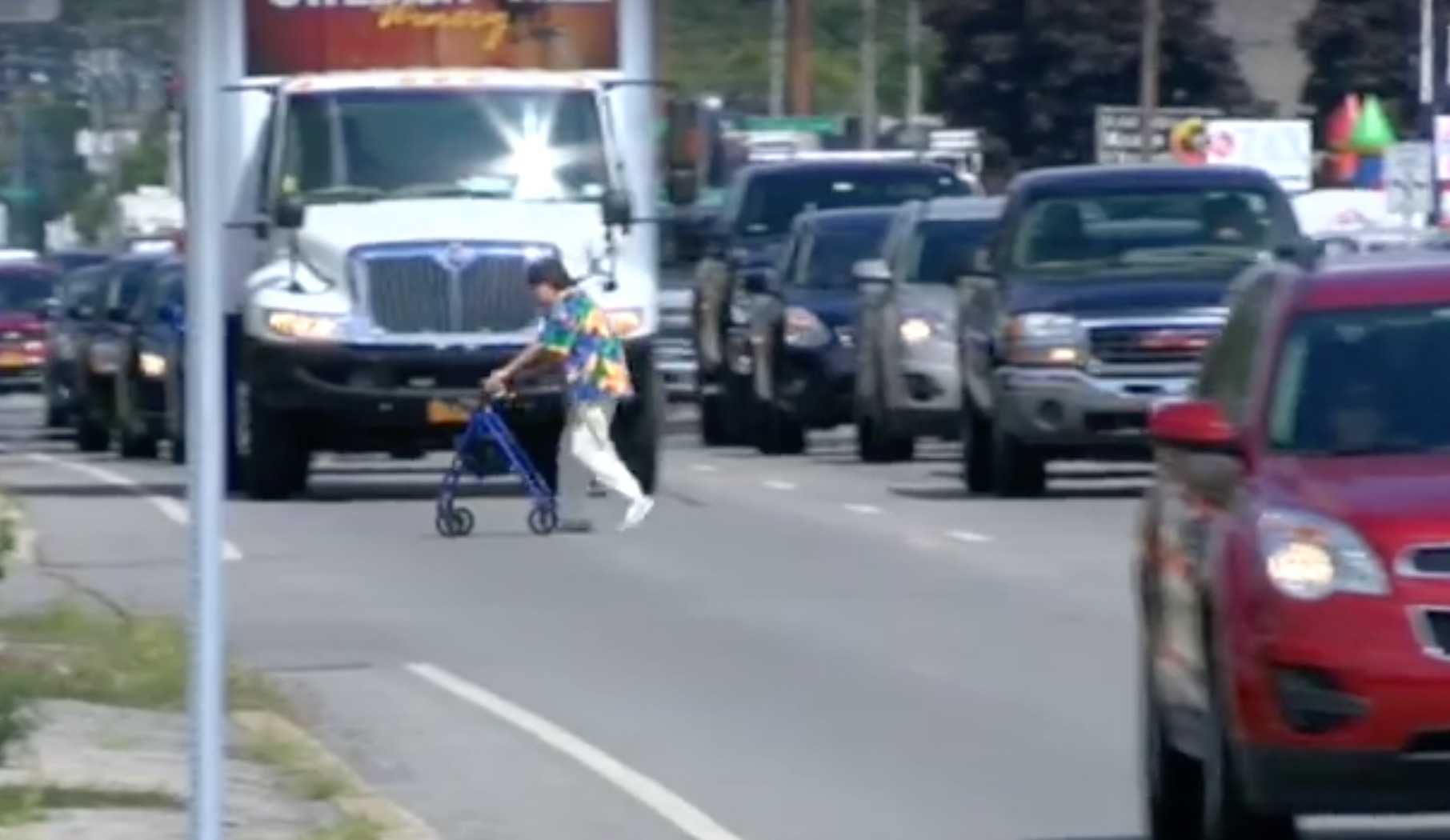 Suburban arterials no longer run through farmland, yet the State Department of Transportation still treats them like rural routes. Streets like Sheridan, Transit, Niagara Falls Boulevard, Maple, and others are essentially four-plus-one lane highways, and the safety of pedestrians who have to occasionally cross them are not being adequately addressed.

Earlier this week, a man using a walker was struck by a car and killed while crossing Niagara Falls Boulevard. On Wednesday, Channel 7 posted this to Facebook:

This person appears to be disabled and is crossing at Thistle and NFB. The closest crosswalk is a .1 mile walk south; about 1/4 mile round-trip. For someone with difficulty getting around, that’s a big detour.

On the Boulevard and other suburban arterials like it, the priority is car traffic and pedestrians don’t even have the status of an afterthought. It’s when you see Sudanese cleaning women crossing Transit to get to their bus stop from the Staybridge Suites at Sheridan, with no crosswalk within a reasonable distance. It’s when a girl is struck and killed crossing at Culpepper and Maple to get to a school playground. Could she have used the crosswalk at MacArthur? Sure. Should there be more frequent crossing locations for pedestrians to reach the school? Yes. People who don’t have cars put themselves in danger every time they cross these roads, and the DOT couldn’t care less.

Need proof? How about Channel 7 shaming this woman for trying to get from Ted’s or Anderson’s to home without taking a 1/4 mile detour south to do it. The video’s text informs you that a woman is seen crossing NFB without using a crosswalk. The walker is clearly visible, and she is accused of crossing “in the middle of traffic and without using a crosswalk”. But she is crossing at an intersection, albeit one with no crosswalk despite there being an Anderson’s and a Ted’s on the Amherst side of the street. WKBW shouldn’t be shaming a disabled woman for not detouring a quarter-mile to use a crosswalk, but query why the crosswalks are so far-between. I’m no expert, and I don’t know the right answer here – more crosswalks w/ HAWK signals or some other pedestrian-activated lights when needed? Introduction of roundabouts, bump-outs, or some other traffic calming to shorten the crossing distances? But to save lives, towns, the county, and the state need to investigate where people are crossing streets and plan appropriately to protect their safety. Crossings need to be improved to save lives.

Shame the DOT and elected officials – not disabled women trying to get home from Ted’s.