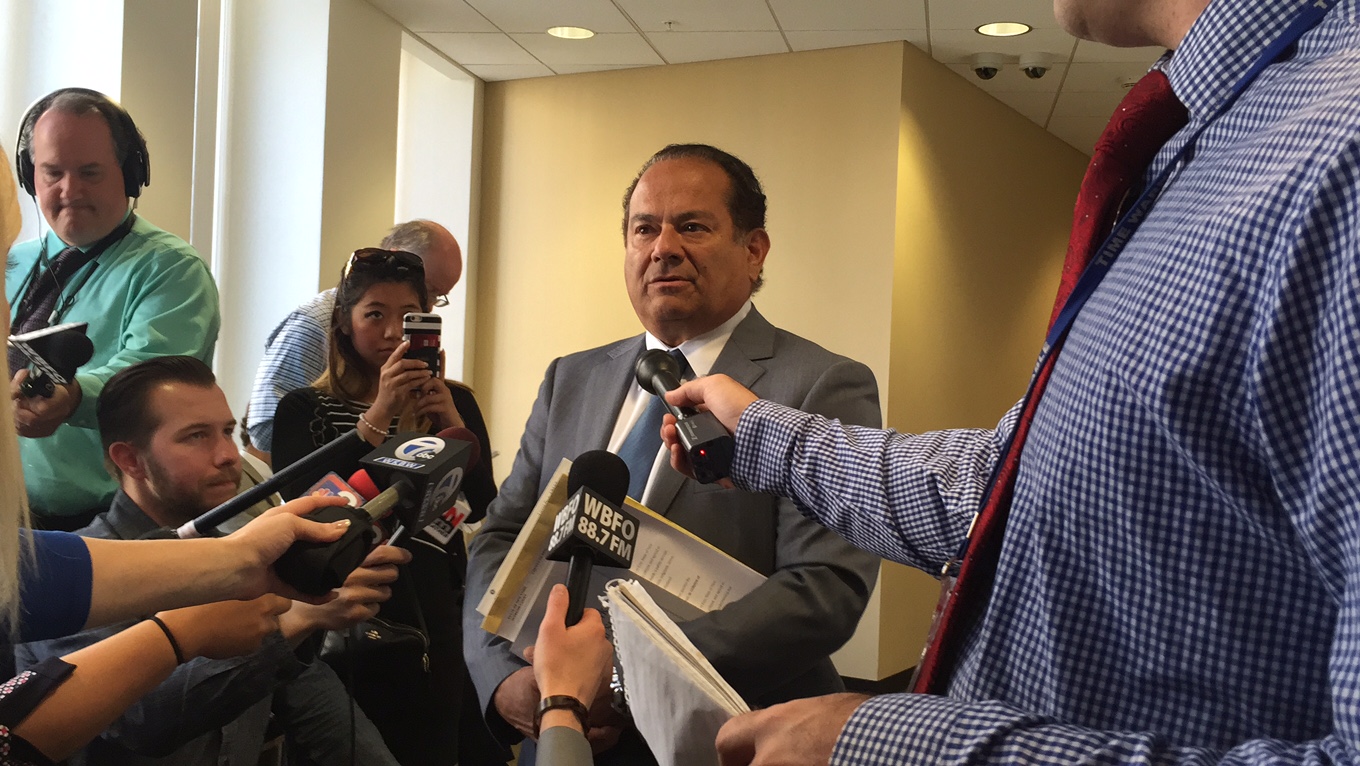 The special grand jury that had been meeting in Buffalo for many weeks returned its sealed indictment on June 28th. Assistant Attorney General Susan Sadinsky from the Public Integrity Bureau unsealed and served the indictment on Pigeon and his counsel, Paul Cambria in court Thursday morning.

The grand jury indicted Pigeon on bribery in the 2nd and 3rd degree, six counts of rewarding official misconduct in the 2nd degree, and grand larceny in the 3rd degree. If convicted, Pigeon faces a sentence of 15 years in prison on the grand larceny charge.

The charges are related to those that brought down former Supreme Court Justice John Michalek on Wednesday, but here it is alleged that Michalek appointed a Pigeon associate to a lucrative receivership, selecting an attorney of Pigeon’s choosing who was absent from a court list of qualified receivers. To secure the appointment, Michalek filed a document with the Office of Court Administration falsely claiming that he required that attorney’s expertise in handling that receivership. In turn, Pigeon is alleged to have committed grand larceny by extortion by illegally extracting a $5,000 “consulting fee” from the receiver who had refused to hire several of Pigeon’s “cronies.”

Assistant AG Sadinsky sought that Judge Cerio impose $25,000 bail to secure Pigeon’s future attendance in court, citing his penchant for international travel and the seriousness of the charges. Cambria argued that Pigeon vehemently denies the charges, and that Pigeon is not a flight risk due as evidenced by his presence in court today, his law license, and his ties to the community. Judge Cerio imposed $10,000 cash bail and $25,000 bond, which Pigeon arranged for immediately after the arraignment. Motions will be heard in mid-September.

Afterwards, Cambria addressed the press and indicated that he was not aware of any ongoing law enforcement inquiry into the matters that led to the Preetsmas raids of May 28, 2015.

Former Assistant District Attorney Mark Sacha, who is running for the office this year, also addressed the press. Sacha was disappointed that none of the underlying election law violations that led to the 2015 raids were being pursued, and confirmed that some of them were still ripe for prosecution. He suspects that political concerns are playing a role in letting those charges go.

Schneiderman will be in Buffalo this afternoon to address the press and provide an update as to the status of these corruption investigations.

Courtesy of WGRZ, here is the text of the indictment against Pigeon:

Today’s indictments are exactly the reason community members and leaders from both law enforcement and the legal profession asked me to run for Erie County District Attorney.

Over the past several years, allegations of illegal campaign finance schemes and transactions were brought to then Erie County District Attorney Frank Sedita and First Deputy District Attorney Mike Flaherty.  Both looked the other way when it came to Steve Pigeon for one reason: he was their political ally.  Obviously NYS Attorney General Eric Schneiderman thought there was enough evidence to investigate the complaints and as a result found extensive criminal behavior which was outlined in court over the last two days.

Steve Pigeon and other bad actors could have been stopped years earlier, and crimes prevented, if only Mike Flaherty and the DA’s office had taken an interest in political corruption.

It is time for a change in the DA’s office.  Today’s indictment combined with the fact that Steve Pigeon associates are running Mike Flaherty’s campaign are reason enough why Flaherty is not a credible candidate for Erie County District Attorney.  As District Attorney, I will follow the evidence wherever it leads and work to restore confidence by changing the culture of the DA’s office, and taking politics out of the decision making process.