The Obscenity of Chris Collins 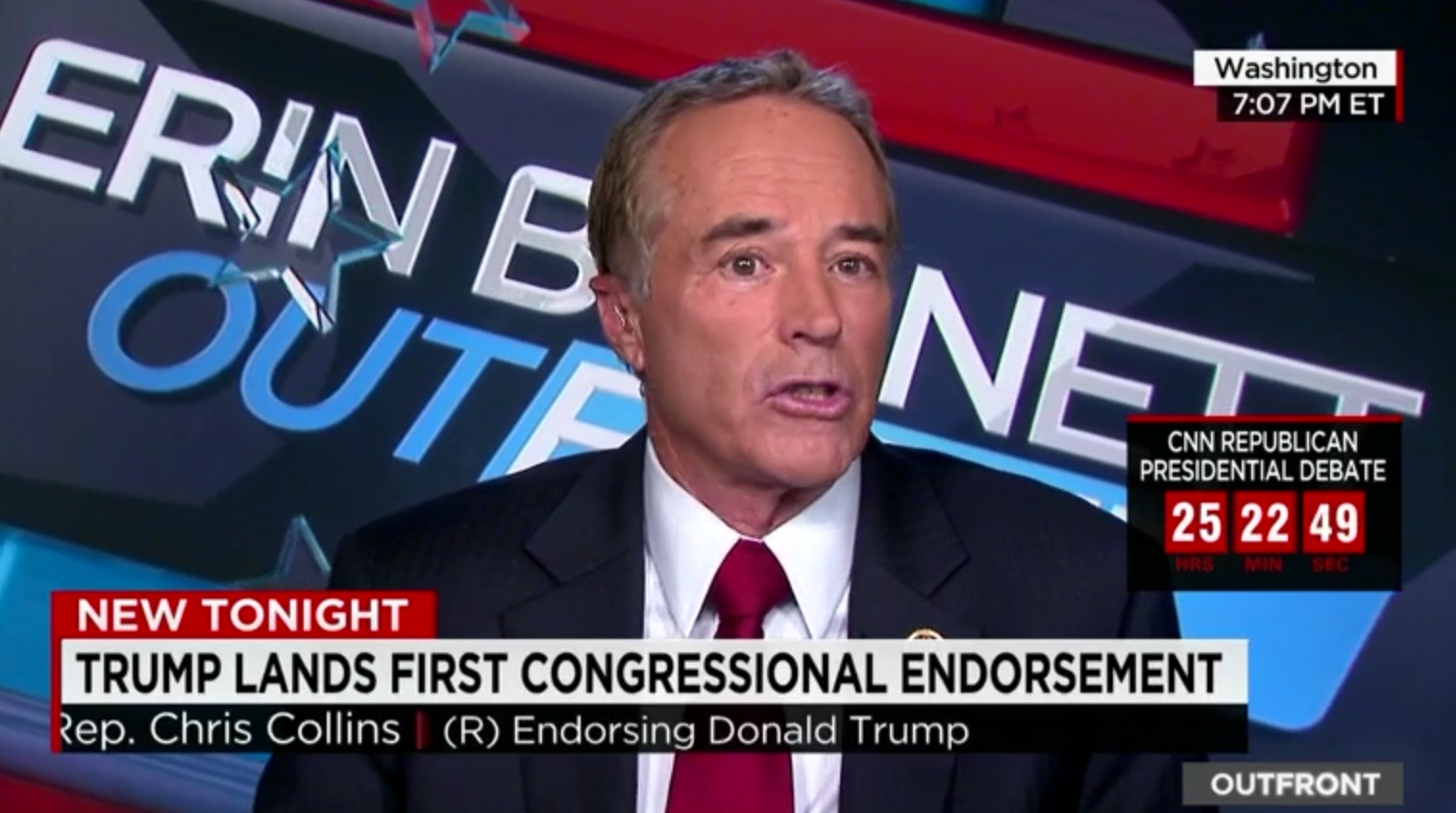 Representative Chris Collins (NY-27), a prominent Trump campaign surrogate, appeared on WBEN’s morning show on Tuesday to react to the massacre of patrons at an LGBT club in Orlando.

Listen as he assails Democrats for “politicizing” this massacre, and then in literally the next breath, gets in a plug for Donald Trump. When asked whether the mass murder by a madman armed with a handgun and an AR-15 might lead to tighter restrictions on gun ownership, Mr. Collins replied,

“No…it’s actually quite shameful. Our president politicizes every tragedy with a suggestion to Americans that some sort of gun legislation to take away Americans’ second Amendment rights would stop this from happening, and that’s just not truthful. In fact, it’s an outright lie. When you think about it, this was a security guard who obviously had weapons, and it…anything that the President would have suggested, this person still would have had his weapons, and unfortunately the tragedy still would have occured.  We should be focused on the root cause, which in this case is ISIS – it’s Islamic terrorism, it’s those who don’t respect America’s way of life, who hate women, who hate gays, and hate America.  And that’s the difference you saw yesterday – we need to identify the enemy – it is ISIS, we need to take the fight to them and we shouldn’t try to divide America, and especially suggesting that there’s some sort of law we could pass that would stop ISIS, whether this was a lone wolf or not, from attacking Americans. So, I was very … not pleased at all with the response of the President, Hillary Clinton, or Chuck Schumer, who yet again are politicizing tragedy.

I will say this – I think there’s a lot of Americans waking up this morning saying, who’s going to keep me safe? Who’s putting America first? And in fact that is Donald Trump, I think this could be a bit of a turning point as people are focused not only on jobs and the economy, but they’re focused on their own safety, and I think Americans know who the enemy is, and it’s not the Republican Party. So I was yet again disappointed, and that’s just a mild adjective, in the President, and certainly Hillary Clinton, but I wasn’t surprised…they politicize every tragedy, and it’s shameful.

Notice the bolded text. I was worried there for a moment that Chris Collins couldn’t assail the politicization of an LGBT hate crime while simultaneously politicizing it by attacking – by name – President Obama, Hillary Clinton, and Chuck Schumer. I was concerned for a moment that Collins wouldn’t have found the political upside for Donald Trump in the mass murder in an LGBT club. But, dang it, he did it. That’s some class-A surrogateship, right there. Use 49 lives to attack Obama, Clinton, Schumer, and the Democrats while puffing Trump. Kudos.

The next question from the WBEN morning zoo mentioned that it was Trump’s birthday, and queried whether it was a good idea that Trump wants to somehow suspend immigration from places where there is terrorism. (Like, apparently, Orlando and San Bernardino).

A little common sense – sometimes we wake up in the morning and our heads bob up and down, say, “yup” – that’s common sense. When the director of the FBI cannot certify that these people immigrating from these dangerous parts of the world where ISIS, al Qaeda, and other terrorist organizations are operating, you’re darn right, it’s time to put America first, keep America safe, our fallback position should be, we’re gonna keep America safe until our intelligence people can tell us the folks coming into our country are, in fact, who they say they are, or they are not a risk to Americans, and I think most Americans would say, it’s about time we put America first.

I’m not quite sure why no one’s being specific, and mentioning that this discussion is about the humanitarian crisis of millions of Syrian refugees escaping a protracted civil war being waged by terrorist organizations against an authoritarian dictatorship. I suspect the focus groups indicate that keeping it all vague and abstract allows people to forget the human scope of what’s happening.

Finally, a question whether Mr. Collins has heard from constituents regarding the tightening of gun restrictions.

Oh, I hear from people all the time, and they’re all saying much of what I’m saying, as well. We know who the enemy is, and the leader – in this case the President – should be identifying and focusing all our efforts on defeating ISIS, and we have a President who won’t even use the terms, “radical Islamic terrorist”, and that distracts all of us from focusing with one laser focus on the enemy, and so – we saw this coming, there was actually disruption on the House floor yesterday, Nancy Pelosi, Steny Hoyer, and the Democrats actually disrupted the entire House floor because right then and there they wanted to start a debate on gun control yet again, it’s very disrespectful, and – you know – our thoughts and prayers go out to the victims and their families, but here we’ve got the Democrats – and let’s face it, that’s what it is – trying to politicize yet another tragedy, and that’s shameful.

Thanks in large part to the President, ISIS’ territory in Syria and Iraq has shrunk, they’re on the run, and they are significantly weakened. As I noted in this column, the phrase, “radical Islamic terrorist”, which Mr. Collins claims a deep need to have the President repeat verbatim, has no magical properties. It’s not like saying, “Beetlejuice” three times. He knows it, too – without prompting, he attempts to explain that phrase’s significance, and the best he can do is say that Obama’s failure to utter it, “distracts all of us” – himself included, presumably – from “focusing with one laser focus on the enemy.”

What that means is that until and unless Barack Hussein Obama (get it?) utters the phrase, “radical Islamic terrorist/m” Chris Collins and our military and House Republicans just can’t get the laser to focus on ISIS or al Qaeda. It’s a dramatically weak, stupid, and pathetic argument. A 4th grader could do better.

Meanwhile, Collins gets in a quick, almost begrudging, “thoughts and prayers” template, and again names two Democrats to attack while denouncing the “politicization” of something that isn’t so much a tragedy as it is an obscenity.

It’s not just an obscenity because it was a hate crime against LGBT people. It’s an obscenity because the shooter was known to law enforcement as a person with terrorist sympathies, yet he was still legally allowed to purchase and own the tools that enabled his mass murder.

In December 2015, it was revealed that people on the Department of Homeland Security’s “no-fly” list were eligible to buy and keep firearms. Senator Diane Feinstein (D-CA) proposed a bill that would have essentially been, “no-fly, no buy”.

The vote was held on the day after the San Bernardino shootings, which were also perpetrated by “radical Islamic terrorists” who were known to law enforcement. The bill had originally been proposed by President George W. Bush in 2007.

The NRA did not respond to a request on Friday for comment. But the gun rights lobby group told MSBC last month it wants to ensure that Americans who are wrongly on the terrorist list are are afforded their constitutional right to due process.

However, the bill would allow people to legally challenge a denial by the Justice Department to purchase a firearm, if they believe they were mistakenly placed on the terrorist watchlist.

The GOP-controlled Senate refusal to pass new gun control measures came weeks after the Washington Post reported that suspected terrorists had successfully purchased more than 2,000 guns from American dealers between 2004 and 2014, even though law enforcement is notifiedwhenever someone on the FBI’s watchlist attempts to purchase a firearm.

Also on Thursday, the Senate failed to pass another bill that would have expanded background checks to gun show and online firearms sales. The measure would also prevents convicted felons and the mentally ill from having access to weapons.

So, when Democrats disrupt the House so that Republicans can’t have their meaningless, empty “thoughts and prayers” or “minute of silence” for victims, it’s because flaccid sentiment and jingoism are not adequate replacements for sane gun policy. The 2nd Amendment protects an individual’s right to keep and bear arms, but not all arms, not all individuals, and it is not an unrestricted, unlimited right. Just as the 1st Amendment does not allow for libel or inciting a riot, the 2nd Amendment doesn’t have a built-in allowance for people on a terrorist watchlist to own an AR-15.

Empty rhetoric and showmanship is what Chris Collins is fighting for here. That, and an opportunity for him to hypocritically pivot from attacking the politicization of this massacre in one sentence, while politicizing it himself in the next.