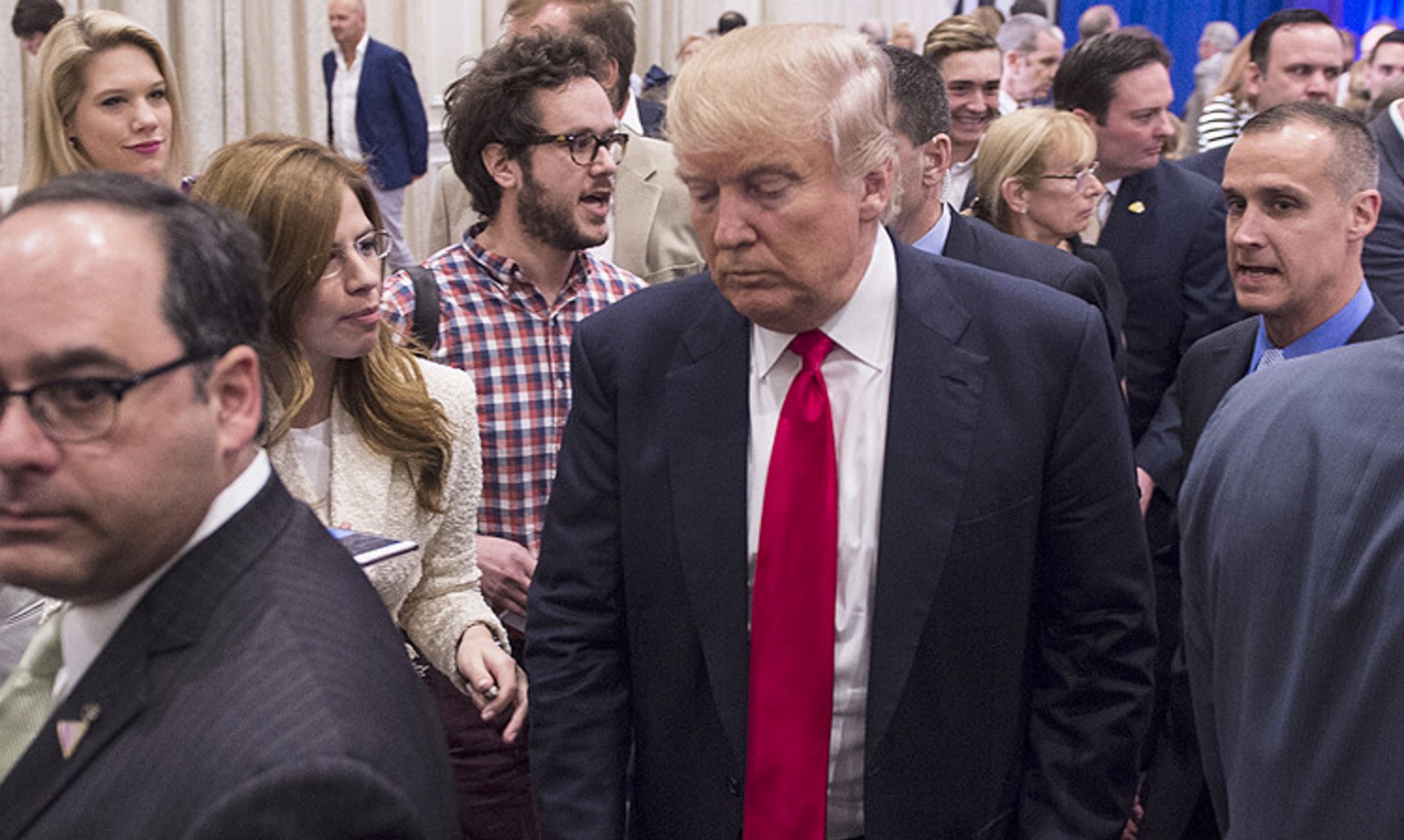 In the Brave New World Donald Trump has developed around himself, it is “political correctness” that led to his campaign manager Corey Lewandowski standing accused of misdemeanor battery.

In the regressive dystopia of North Carolina, hatred of LGBT people and suspiciously eyeing the notion of “civil rights” remains in vogue.

Far be it from me to defend an ultra-conservative refugee from the Breitbart nihilistic fabrication consortium, but when a man intentionally puts his hands on a woman against her will, and leaves a mark, that’s a battery. This is what happened to reporter Michelle Fields, and none of it has anything to do with political correctness.

More to the point, there didn’t need to be a mark. There just had to be an intentional unwanted touching, however slight. Corey Lewandowski is not a law enforcement or Secret Service agent or in any other capacity that would lend him immunity from a battery charge.

Fields’ story has never changed. She claimed Lewandowski grabbed her very hard and almost lost her balance. She made the error of attempting to ask a Presidential candidate a question as he moved through a ballroom where he had just pretended like Trump Steaks and Trump Magazine still existed.  Luckily, he didn’t attempt to argue that Trump Shuttle was still around.

What we learned is that Trump values his “brand” so much, he’ll affix his name to any old tasteless tack. Like his campaign effort.

I guess these just magically appeared on me @CLewandowski_ @realDonaldTrump. So weird. pic.twitter.com/oD8c4D7tw3

But the way Trump and Lewandowski have reacted is right out of the domestic abusers’ playbook.

@MichelleFields you are totally delusional. I never touched you. As a matter of fact, I have never even met you.

Michelle Fields is an attention seeker who once claimed Allen West groped her but later went silent. https://t.co/J86Ej42eYx

Why aren’t people looking at this reporters earliest statement as to what happened, that is before she found out the episode was on tape?

When in doubt, just blame the victim and suggest she’s lying.

But alas, Fields’ audio recorded caught the whole thing, and her instantaneous, contemporaneous reaction was quite amazing. Lawyers call it an “excited utterance”.

Holy shit, I can’t believe he just did that. That was so hard. Was that Corey? You should have felt how hard he just grabbed me.

Fields detailed what happened in a story at Breitbart, and at first the website called on Lewandowski to apologize, highlighting how he and Trump were accusing Fields of making it all up. But the outfit was too afraid of Trump to stand by its reporter, and like a petulant little army of amateur Jim Garrisons analyzing myriad Zapruder films, began questioning her story immediately. Seriously, consider the idea of a putative “news” outlet trusting its reporter enough to hire her, but not enough to back her up when she says someone from a campaign put his hands on her. Fields and her colleague Ben Shapiro left Breitbart on March 14th over this, and some more people quit a few days later.

Ms. Fields said she was trying to ask Mr. Trump a question about affirmative action when Mr. Lewandowski grabbed her and nearly knocked her off her feet. She posted on Twitter a picture of finger-shaped bruises on her arm.

Mr. Lewandowski denied touching her, but Ms. Fields pressed charges three days later. The investigating officer, Detective Marc Bujnowski, took statements from her and from a Washington Post reporter, Ben Terris, who was a witness.

Security video footage from the Trump golf club “parallels what Fields had told me,” the detective wrote: Mr. Lewandowski “grabbed Fields left arm with his right hand, causing her to turn and step back.”

Indeed, the new security-camera images show Mr. Lewandowski reaching for and then grabbing Ms. Fields’s arm, tugging at her clothing as he pulls her, then walking ahead of her as she reacts, close behind Mr. Trump. The entire episode takes less than four seconds.

The abuser is being prosecuted. Police – who have no axe to grind – interviewed witnesses and reviewed audio and video tape to determine that probable cause exists to charge Lewandowski. Whom are you going to believe? Donald Trump and his paid staffer, or your lying eyes and ears?

Astonishingly, macho hero Trump is now claiming that Fields – a 100 lb woman with Trump campaign press credentials – posed a threat to him because she was holding a pen, which may have been a “little bomb”.  I shit you not.

Turning to North Carolina, its legislature bulldozed a law onto the books that would allow businesses to discriminate against LGBT people, mostly over bathrooms. Lawmakers had to ask for five minutes to read its text. Under pressure from businesses and professional and amateur sporting associations, North Carolina Governor Pat McCrory is playing defense.

This law basically nullifies any policy made by any municipal entity that would allow transgendered people to use the bathroom or locker room of the gender with which they identify. While private businesses can do whatever they want – including discriminating against LGBT patrons – state facilities require that a person use the bathroom or locker room that corresponds with what it says on his birth certificate.

Think of it this way: 81 year-old Renee Richards, who made headlines in – and has lived as a woman since – the mid-70s, might be forced to use the men’s room at a North Carolina highway rest stop. McCrory says people who undergo sex change operations can get their birth certificates changed, but all this underscores that North Carolina will need to set up some sort of Birth Certificate Police infrastructure – a Toilet Stasi – to ensure compliance.

In other words, the only way to respect people’s difference is through discriminatory legislation. North Carolina’s Attorney General calls the law an embarrassment and won’t defend it in court. Here is what Governor McCrory said:

We have not taken away any rights that currently existed in any city in North Carolina — from Raleigh, to Durham, to Chapel Hill, to Charlotte. Every city and every corporation has the exact same discrimination policy this week as they had two weeks ago. There’s a very well-coordinated campaign — a national campaign — which is distorting the truth — which is frankly smearing our state in an inaccurate way — which I’m working to correct… We have not changed one policy of any business in North Carolina or one policy of any employment status of any city government or county government in North Carolina.

Except that’s not at all true. The state has now overridden any NC municipal government that offered anti-discrimination protection stronger than the state’s own, including laws in Charlotte, Asheville, Boone, Carrboro, Chapel Hill, Greensboro, Bessemer City, Durham, High Point, and Winston-Salem – and several counties. The UNC system can no longer enforce its own LGBT anti-discrimination policy, and these schools are now expressly prohibited from accommodating transgender students, faculty, alumni, and parents.

“We are too much politically correct. This political correctness in our nation has taken over common sense, and the common sense is not to have a government regulation telling a business who they allow in what restroom, or locker room, or shower facility. I’m going to let them decide.”

“We’re throwing away basic etiquette,” he claimed. “I wonder if your daughter or son was showering and all of a sudden a man walks into the locker room and says, ‘This is what I am.’ Would you want that for your child?”

Of course, Charlotte’s law, like LGBT protections in cities and states across the country, would have done nothing to allow for any inappropriate or illegal behavior in restrooms. By calling transgender women “men” and suggesting that they are somehow a threat to children, the governor is relying on ignorance and fear to support his position.

New York’s Governor Andrew Cuomo barred any and all non-essential travel to North Carolina on the state’s dime. Governor McCrory shot back,

Syracuse is playing the Final Four in Houston where voters overwhelmingly rejected a bathroom ordinance that was also rejected by the state of North Carolina. Is Governor Cuomo going to ask the Syracuse team to boycott the game in Houston? It’s total hypocrisy and demagoguery if the governor does not, considering he also visited Cuba, a communist country with a deplorable record of human rights violations.

Syracuse is a private institution. Cuba may be a communist country, but unlike North Carolina, it is opening up – not going backwards. Also, non-essential state-funded travel to Cuba is also not permitted.

Finally, odious Representative Chris Collins, who endorsed for President the guy who said this:

Trump in Wisconsin: “The problem is we have the Geneva Conventions, all sorts of rules and regulations, so the soldiers are afraid to fight”

and recommended that women who undergo abortions – which he would outlaw – be “punished”,  posted this to Facebook:

Someone ask this depraved opportunist what the state policy is for non-essential state travel to Cuba. Hint: it’s not allowed. This whole “Cuba” thing is not only the dumbest argument, ever, but it’s completely outside this clown’s jurisdiction. He should stick to stealing other people’s patents and manufacturing shit in Communist China.

Incidentally, Cuomo’s trip to Cuba brought a lung cancer vaccine to Roswell Park Cancer Institute. By throwing shade at Cuomo for that trip, Collins proves himself to be objectively pro-lung cancer.

It wouldn’t be the first time.

The healthcare reforms Collins said he would push would be tort reform and open up competition in insurance by allowing policies across state lines.

Collins also argued that modern healthcare is expensive for a reason.

“People now don’t die from prostate cancer, breast cancer and some of the other things,” Collins said.

Do better, America. We didn’t spend 240 years building our country to let it be so shoddily treated by misogynists, homophobes, and craven, despicable nouveau-career politicians.