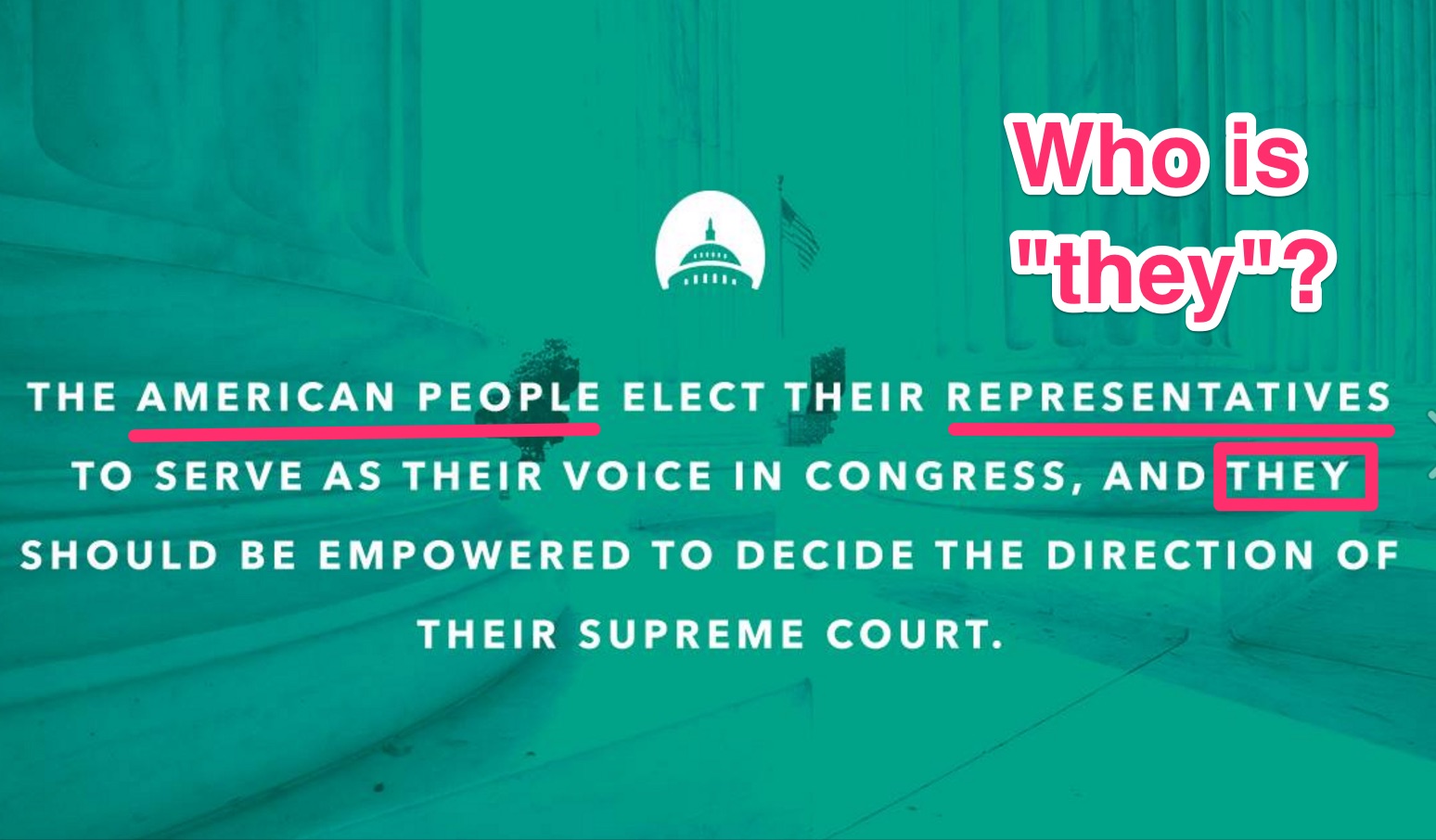 First of all, let’s point and laugh at the wholly owned subsidiary of Trump Industries, Chris Collins, who posted this ridiculousness to his Facebook yesterday:

You’re in the House; you’re not in the Senate. The Constitution leaves the confirmation of SCOTUS justices up to the Senate and not the House. On this issue, your opinion is as persuasive and valid as your pet’s. Secondly, the American people also elect the President, who is Constitutionally charged with appointing a SCOTUS justice. President Obama was re-elected in 2012 and continues to serve today. We voters don’t elect or have any other say in the appointment or promotion of federal judges, so the entire underlying notion is false.

Now, look at the language in the image. “The American people elect their representatives to serve as their voice in Congress, and they should be empowered to decide the direction of their Supreme Court.”

Who should be empowered? The people or their representatives? From what statute or regulation does Mr. Collins extrapolate this fantastical “empowerment”? Because “representatives” are how we refer to members of the House, and they have nothing whatsoever to do with the Supreme Court. The people of the state of New York have elected Senators Chuck Schumer and Kirsten Gillibrand, and I’m sure their position differs from Mr. Collins’.

For his entire Presidential career – from campaign to White House – President Obama has been expert at giving the Republicans just enough rope to hang themselves. This is just the latest example. D.C. Circuit Justice Merrick Garland is a perfect Obama pick – a centrist who is well-respected, and about whom Republican Senator Orrin Hatch said this just days ago,

“Sen. Orrin Hatch (R-UT) told Newsmax on Friday that President Obama wouldn’t nominate a “moderate” like Merrick Garland to the Supreme Court. On Wednesday, the Utah senator was proven wrong.

“The President told me several times he’s going to name a moderate, but I don’t believe him,” Hatch told the conservative news site on Friday.

“[Obama] could easily name Merrick Garland, who is a fine man,” he continued. “He probably won’t do that because this appointment is about the election. So I’m pretty sure he’ll name someone the [liberal Democratic base] wants.”

Well, he didn’t. President Obama nominated a centrist, consensus candidate whom the Republicans have supported before. Bluff called, and make no mistake – liberals are pissed off. They see this as Obama selling them out, mostly because they care more about ideology than winning.

But the contemporary conservative movement being the grift that it is, ignorant commentators are already ignoring reality and history by smearing Judge Garland. Good luck with that.

The underlying argument for this unprecedented obstructionism, where Republican Senators refuse even to meet with Judge Garland, is that the “people should have a voice”, and holding off until after the election. That would mean that Democrats could hammer the Republicans for this every single day from now until November, and it’s perfectly possible that Republicans lose Senate seats over this. So, this entire calculus is based on the idea – as it stands now – that Donald Trump defeats Hillary Clinton in November. This seems to me to be entirely unlikely, albeit possible, but a very risky proposition.

“I’ve selected a nominee who is widely recognized not only as one of America’s sharpest legal minds, but someone who brings to his work a spirit of decency, modesty, integrity, even-handedness, and excellence. Presidents do not stop working in the final year of their term; neither should a senator.”

Because what happens if the Senate continues with this particular obstruction is that if Hillary Clinton becomes President-elect, President Obama can withdraw Judge Garland from consideration, in favor of allowing the new President an opportunity to name her own pick, and the Republicans will have had a chance to confirm a palatable centrist, but instead find the court with a liberal majority. So, if Clinton wins in November, the GOP are kidding themselves if they think they’ll have a chance to confirm Garland at that time in a lame duck session.

Republicans quickly rejected Mr. Obama’s challenge. Senator Mitch McConnell of Kentucky, the majority leader, appeared on the Senate floor shortly after the president’s remarks to declare an end to Judge Garland’s nomination, no matter his qualifications. In case there was any doubt, Mr. McConnell later called Judge Garland personally to say he would not be receiving him in his Capitol office, nor taking any action on his nomination.

“The American people may well elect a president who decides to nominate Judge Garland for Senate consideration,” Mr. McConnell said on the Senate floor. “The next president may also nominate someone very different. Either way, our view is this: Give the people a voice in the filling of this vacancy.”

So, if the principle is “let the people have their say”, and they elect Clinton, that means you’ve set up a scenario whereby you must honor whomever President Clinton nominates, and you cannot confirm Judge Garland in lame duck session.

Sen. David Perdue (R-GA), who also sits on the Judiciary Committee, agrees that Republicans could not change their minds in the lame duck session and move forward with Garland.

But the upshot of all of this is that Chris Collins is a foolish man who is politicizing an issue that exists far above his rank or pay-grade, and has the added bonus of being completely out of sync with the Constitution.

Diana Kastenbaum, a business owner from Batavia, is running against Chris Collins. For the uninitiated,

“As a small business owner from Batavia, I am well aware of the realities that face middle class families,” said Kastenbaum. “Using my years of experience as a businesswoman, I will bring new ideas and solutions to the problems we face in Western NY. We need a Member of Congress who will fight for Western NY on the issues that matter most; good paying jobs, ending income inequality, making college more affordable, and providing access to affordable healthcare. Where Congress has failed us, I will lead.”

Kastenbaum’s family has owned and operated Pinnacle, a zinc and aluminum dye casting manufacturing company, since 1972.  She is a graduate of The Catholic University of America in Washington, D.C.

So far, she hasn’t tried to politicize a matter that exists wholly within the legal purview of the President and Senate.