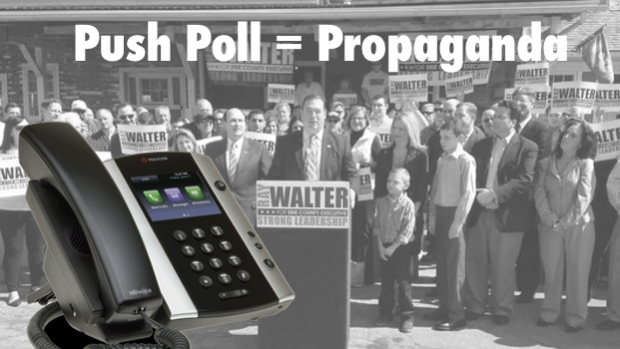 Households throughout western New York have received calls from area code 315 purporting to be an opinion poll from an organization that has “Liberty” in its name. The first question had to do with whom you would vote for if the Presidential election was held today: Marco Rubio or Hillary Clinton?

An easy way to identify your voter, I suppose, and the choice of Rubio over, say, Trump, is notable.

A push poll is defined as “is an interactive marketing technique, most commonly employed during political campaigning, in which an individual or organization attempts to influence or alter the view of voters under the guise of conducting a poll.” In other words, it’s a campaign advertisement masquerading as an opinion poll.

It would appear that desperate times call for desperate measures.

Opinion polling is a valuable tool for campaigns, politicians, and the general electorate. It’s a tough and competitive business that oftentimes comes under exquisite scrutiny and partisan condemnation. Push-polling, on the other hand, is little more than propaganda; rumor-mongering.

The push-poll that countless Erie County voters have received in recent weeks is Republican propaganda generally, and more specifically a negative campaign tactic against incumbent Democratic County Executive Mark Poloncarz, and in support of his challenger, Republican Assemblyman Ray Walter. Walter denied to me that his campaign had anything to do with it, and Nick Langworthy says his committee knows nothing about it. Some people on Twitter speculate that this might be the work of the Casale Group, a pro-Republican campaign communications firm, which is located in the 315 area code. DIsclosure reports reveal that Walter hasn’t paid Casale yet this cycle, but he’s spent $60,000 on their services in his 2011 Assembly race. but there’s no confirmation yet that it did the call. If Walter and Langworthy are telling the truth, the culprit may be some right-wing political committee; perhaps the state Republican committee.

How do we tell a push poll from a legitimate opinion poll?

For starters, this one was a dead giveaway because it refered to Poloncarz as the “Democrat Party” candidate, rather than “Democratic Party”. After asking me about my Rubio/Clinton preference, it went on to set up a question about Walter’s city vs. suburbs tax proposal by lavishing praise and slathering it with a schmear of undeserved equity before asking me if I agreed.

Here’s how it sounded, using a hypothetical example: “Ray Walter believes that kale is a disgusting, malodorous plant that tastes like poison, causes cancer, and should be eaten by no one. Do you support or oppose the eating of cancer kale? Press 1 for yes, 2 for no.”

Another question asked whether I supported a spending cap for Erie County. Another accused Poloncarz of personally transporting hundreds of Syrian refugees to basically live next door to you, go directly on welfare, and pose a “security threat” by throwing Sharia Law firecrackers at your head or something. It asked if the county does a good job maintaining roads, and whether I support towns getting more sales tax revenue, thus lowering my town taxes. It asked me my opinion of common core and testing of students.

The people or committee(s) behind this push-poll was not disclosed at the end; state law doesn’t require it.

In 2000, John McCain was the victim of vicious push-polls that George W. Bush and Karl Rove set up in South Carolina after McCain shellacked Bush in New Hampshire.

The rumors [about McCain] were spread through push polls—“really not polls” at all, according to Lee Miringoff, director of the Marist Institute for Public Opinion and president of the National Council on Public Polls, but “more of a telemarketing device, where you’re actually calling people in the guise of a poll and you’re not gathering information as much as you’re disseminating it.” A push poll is further defined as solely intended to spread false, damning information; a pollster who asks your opinion about something negative but true in a candidate’s record is not push-polling. Tige Watts, a Columbia consultant and pollster who considers push polls unfair and doesn’t do them, said he understood some of the calls went like this: “They’d ask who you’re voting for. If you said Bush, they’d say, ‘That’s great. Be sure to vote.’ ” You’d hang up thinking it was just a normal get-out-the-vote (G.O.T.V.) call. “But if you said McCain, they’d ask a litany of questions: ‘Would you vote for McCain if you knew … ?’ Basically, they just threw the book at him.” Watts could tell when the calls peaked—about a week before the vote—“because everybody started talking about it. It was like a waterfall.”

Push-polling is cheap and easy to get away with. Watts estimated it runs “about a 10th of the price of a truly scientific” poll—as little as 25 to 30 cents a call—since what the voter says isn’t recorded or tabulated. “I doubt they even train the interviewers,” added Warren Mitofsky of the highly respected Mitofsky International polling firm. “They give them a script and tell them to read it.” Some states have laws regulating push-polling, but to little effect, and the American Association for Public Opinion Research investigates public complaints but can rarely trace who’s behind it. People who get push-polled seldom ask who’s calling or get a call-back number, and, Mitofsky says, “none of the campaigns ever admit” to push-polling.

All of this highlights one of the many problems with New York State election law – that campaign propaganda can be released anonymously. That’s a shame, because people have a right to know who’s trolling them. The fact that I don’t know who was behind that push-poll is a problem, in and of itself.

If we want transparency in campaigns and how they’re financed, we need to not only strictly enforce the laws we already have on the books, but also begin treating the whole issue as a consumer protection issue. If I have a right to know whether something posing as health food is actually packed with high fructose corn syrup, or whether a product actually accomplished the task it’s advertised for, then I deserve to know who is funding campaign propaganda, how that organization got its funding, and from whom and in what amount. Anything less than that serves to protect malfeasors and harm the electorate.

One way to combat poor name recognition and a popular incumbent opponent is to lay the propaganda on thick. Question now is: who’s behind it?

As it turns out, it appears from my social media timelines that people know when they’re being push-polled, and they don’t like it. I sure hope this year’s Erie County Executive campaign can be run on issues rather than negativity and subterfuge.