Buffalo Provincialism and the Right to Marry 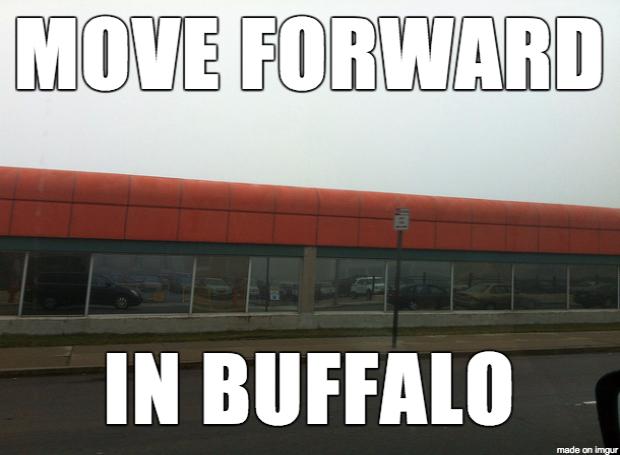 For all of western New York’s charms, things like taxation and political malefaction help to keep Buffalo down. It’s like every two steps forward are met with a step back. But the biggest thing holding us back is our own provincialism. It’s on display every time Carl Paladino denounces the “damn Asians” at UB, and every time any word is uttered on Buffalo hate radio.

As an aside, this past weekend I heard a few minutes’ worth of Rus Thompson and sitting Assemblyman (!) David DiPietro filling in for the execrable “financial guys” on WBEN, and they were whining about how right-wing talk radio is labeled “hate radio” because they disagree, adding that if a librul disagrees, it’s “tolerance”, but if it’s a conservative real ‘mrkn, it’s “hate”.

No. When a conservative respectfully disagrees and debates, that’s perfectly reasonable. When, however, a conservative spews gutter prejudice and hatred, that’s something different, and deserves to be called out for what it is –  hate.

Late last week, the Supreme Court struck down laws throughout the country that prohibited same-sex marriage. Gay couples are now free to formalize their relationships and marry in all 50 states. I have to imagine that the rapid acceptance of same-sex marriage in the US (we went from civil unions in Vermont in 1999 to marriage in Massachusetts in 2004 to universal applicability in 2015) had to do with our American sense of acceptance and justice, but also thanks to the very simple fact that allowing gay couples to marry did not, as opponents promised, lead to polygamy or incest or bestiality or a destruction of the institution of marriage. Perhaps having political figures who were caught in diaper play with prostitutes concern-troll about the sanctity of marriage was somewhat ineffective.

Here’s the last paragraph of the Supreme Court’s opinion:

No union is more profound than marriage, for it embodies the highest ideals of love, fidelity, devotion, sacrifice, and family. In forming a marital union, two people become something greater than once they were. As some of the petitioners in these cases demonstrate, marriage embodies a love that may endure even past death. It would misunderstand these men and women to say they disrespect the idea of marriage. Their plea is that they do respect it, respect it so deeply that they seek to find its fulfillment for themselves. Their hope is not to be condemned to live in loneliness, excluded from one of civilization’s oldest institutions. They ask for equal dignity in the eyes of the law. The Constitution grants them that right.

Here is the statement of Bishop Gregory Hartmayer of the Savannah, GA diocese:

…every court decision is limited in what it can achieve; again this one is no exception. This decision does not change the biological differences between male and female human beings or the requirements for the generation of human life which still demands the participation of both. It does not change the Catholic Church’s teaching regarding the Sacrament of Matrimony, which beautifully joins a man and a woman in a loving union that is permanent in commitment and open to God’s blessings of precious new life.

The Catholic Church will always maintain that marriage is a vocation of a man and a woman to faithfully commit themselves, through sacred vows, to a life shared until death which pledges them to complement one another in their development as husband and wife and to be co-creators with God in the procreation of human life.

This decision of the Supreme Court is primarily a declaration of civil rights and not a redefinition of marriage as the Church teaches.

However, this judgment does not dispense either those who may approve or disapprove of this decision from the obligations of civility toward one another. Nor is it a license for more venomous language or vile behavior against those whose opinions differ from our own.

This Court action is a decision that confers a civil entitlement to some people who could not claim it before. It does not resolve the moral debate that preceded it and will most certainly continue in its wake.

The moral debate however must also include the way that we treat one another – especially those with whom we may disagree. We are all God’s children and are commanded to love one another. In many respects that moral question is at least as consequential and weighty as is the granting of this civil entitlement.

This decision has offered all of us an opportunity to continue the vitally important dialogue of human encounter especially between those of diametrically differing opinions regarding its outcome.

This decision has made my task as bishop more complex as I continue to uphold the teachings of my Church on the Sacrament of Matrimony and the equal transcendent dignity of every human person.

By contrast, here is what Bishop Malone of the Buffalo Diocese spat,

I am bitterly disappointed that the majority of justices of the U.S. Supreme Court has decided to overturn the definition of marriage, which has remained unchanged for more than two millennia.  Marriage is the lifelong exclusive union of one man and one woman, a font of unitive life and love as well as the foundation of a stable family and society.

Marriage is rooted in creation: God created marriage in the very same breath as He created the human person, and for the Catholic Church, that will not change.

It is my prayer that despite today’s developments, we will embrace anew the truth, beauty and goodness of marriage as it has always been and always will be, between a man and a woman.

But “lifelong exclusive union of one man and one woman”? Does Bishop Malone refuse communion for “divorced” Catholics whose marriages have been neither “exclusive” nor “lifelong”? Does he allow married Catholics to be granted an “annulment” and re-marry in the church?  If Bishop Malone is permissive when it comes to divorce, which breaks a “lifelong” sacramental marriage, how does he reconcile that with his “bitter” disappointment when a gay couple seeks to solemnify their relationship? How sad and hypocritical.

If marriage was limited to procreation, then it would be illegal for older couples or sterile couples to marry. If it’s all about having kids, is the Bishop “bitterly disappointed” in childless couples?

In another twist reminiscent of the Hobby Lobby case, where the Supreme Court declared that being in business can be the same as practicing religion, Texas Attorney General Ken Paxton issued an opinion allowing state officials to refuse to issue same-sex marriage licenses if it violates the clerk’s religious beliefs. There will likely be litigation over whether being an appointed or elected public official constitutes or intersects with the exercise of religion. It seems to stretch credulity to claim that executing the duties of a county clerk constitutes the exercise of religion.

Same-sex marriage has been the law in New York for a few years now, and if it has had any effect on the institution of marriage, it’s strengthened it. After all, look at all the same-sex couples who have sought the rights and responsibilities of legal marriage wherever legal.

Bishop Malone’s statement is as heartbreakingly narrow-minded as it is self-admittedly bitter. Bishop Hartmayer shows that, while the Catholic Church is unlikely ever to sanction same-sex marriage, it doesn’t have to heap bitter narrow-minded hatred on gay people and couples. Bishop Malone isn’t alone in doing so, but western New York has this weird, self-defeating habit of being tolerant of racism and hatred, but intolerant of love and acceptance.

Malone’s unnecessarily bitter rant, as juxtaposed against Bishop Hartmayer’s gentle statement, is just another bit of evidence of Buffalo’s own self-defeating intolerant provincialism. In short, this area won’t change until its people do.

Same-sex marriage doesn’t negatively affect anyone – least of all the Catholic Church. It’s been legal in New York State for several years with no controversy, so it’s silliness for the Bishop to so desperately condemn something that doesn’t affect him or the diocese in the least. Love over hate; acceptance over fear. That’s the way forward.