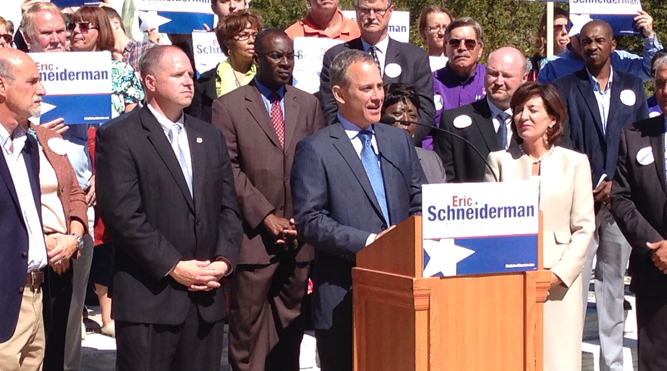 Earlier this week Attorney General Eric Schneiderman proposed a sweeping set of reforms to New York’s byzantine and minimally ethical election and campaign finance regulations. What you should pay attention to is this detail: every year, your candidates for state legislature promise to clean up that city’s political cesspool. They punctuate this all of this with caricatures of indicted former Assembly Speaker Sheldon Silver and indicted former Senate Majority Leader Dean Skelos. They call Skelos a “RINO”, or they promise to free the Assembly from Silver’s corrupt fingers.

When they actually get there, however, none of this happens. A couple of exceptions include current Buffalo Comptroller Mark Schroeder and Assemblyman Mickey Kearns, both of whom refused to back Silver as speaker. When Governor Andrew Cuomo proposed milquetoast pseudoreforms in 2014 and 2015, the few that mattered he negotiated away with the other men in the budget negotiation room. In fact, he went so far as to simply shut down the Moreland Commission he created to examine corruption and make recommendations to end it.

There exists no political will or serious push to undertake the sorts of reforms that Albany needs to become a little less like a dictatorial junta and a little more like a deliberative representative legislative entity.

When your state capital has to rely on the U.S. Attorney who handles a completely different geographical jurisdiction – the Southern District of New York – to prosecute corrupt politicians, you know your problem is more than just trivial.

Attorney General Schneiderman’s proposal, therefore, provides Albany with a way to fix itself before it’s too late. But there’s a weak link here – all of those Albany pols who promised you they’d clean up the state house if you elected them to – what, their 20th term of office – are the ones who would need to propose, debate, and pass any such legislation. It’s not a sexy law that results in any ribbon-cuttings back home, so don’t hold your breath.

Schneiderman outlined his proposal in an op-ed published on May 26th. Noting that 30 state officials and legislators have left office due to criminal or ethical breaches since 2000, he notes that the indictments of Silver and Skelos should serve as an acute wake-up call. Schneiderman notes that he and state Comptroller Tom DiNapoli have prosecuted 60 electeds and their “cronies” in just the past four years – an untenable and frankly outrageous figure. His proposed law, the…

It expands the tools available to state prosecutors to investigate and prosecute public corruption.

It ends a system that allows outside employment income for legislators, who should have no “clients” other than the people of New York. In turn, they would be paid like the full-time professionals they are and get a salary increase. I have also proposed a constitutional amendment to change the period between legislative elections from two to four years, to create at least some time for members of the Assembly and Senate to focus on governing first, and politics second.

These are reforms worth considering. Why this, and why now?

“Every year, more or less, for the past five or six years there have been ethics reform packages introduced and passed in Albany,” he said. “And every year or so there’s a press conference and they say, ‘We have made fundamental reforms; we have cleaned this up.’ And then there are more scandals and there’s more outrage, and it’s clear that they didn’t work.”

“I’m done with advocating for incremental reforms — it’s time for us to be bold,” he said.

If you need any more proof, consider that the new Senate Majority Leader John Flanagan recently said that his conference wasn’t going to bother looking into ethics reforms. Shrug.

One of the Schneiderman’s proposed reforms would close what’s called the “LLC loophole”. This legal defect enables politicians to raise massive sums of campaign cash that is difficult, if not impossible, to trace. For donors, it’s an easy way to (a) donate cash without leaving easily identifiable fingerprints; and/or (b) completely bypass and ignore the mandatory maximum donation. It costs just $200 to file and create an LLC, and each LLC can donate as a separate individual. One New York City developer has used the LLC loophole to pour over $13 million into campaign coffers since 2000. Fixing this loophole is simple – in fact, Brooklyn Democrat Dan Squadron proposed a bill to do just that, but it was upstate Republicans in the Senate who effectively killed the effort, including the chair of the Corporations Committee Mike Ranzenhofer (R-East Amherst).

So much for the tired upstate memes about corrupt downstate legislators, right?

…treat LLCs like corporations or other joint-stock entities, which have $5,000 annual donation limits. Under a current state Board of Elections ruling, each of a developer’s LLCs can give up to $150,000 each annually, the same as a single individual.

The Assembly passed a bill similar to Squadron’s earlier this May, and you can watch Ranzenhofer’s committee stall the Senate version on YouTube.

Schneiderman’s proposal revives Squadron’s effort, and bans legislators from earning outside income, turning them into full-time professional legislators. The current salary approaches $90,000, plus per diems, and as much as we in New York hear from short-sighted tea partiers about how veteran teachers who earn similar amounts are dramatically overpaid, I’m sure we can dispense with any potential complaints about legislators’ earnings. Issues surrounding putside income helped put handcuffs on Sheldon Silver. The Attorney General’s proposed law would go further still, making it a felony to use one’s public power for personal gain. He would abolish “housekeeping accounts” that are ostensibly used for campaign overhead, but have no contribution limits and are ripe for abuse. It would also tighten rules on campaign consultants’ ability to then lobby the people they helped elect.

The glaring thing missing from Schneiderman’s proposals is something that New York needs to very carefully consider – abolition of our corrupt and needless system of “electoral fusion”. New York is one of only eight states that still allow multiple parties to cross-endorse the same candidate for office. It just shouldn’t be – whether we’re talking about the so-called “Independence” fusion Party, whose raison d’etre is patronage, and also to trick unawary voters who intended to register as what New York calls “unenrolled”; the “Conservative” fusion Party, whose platform planks are as set in stone as the party’s options for patronage and advancement, or the “Working Families” Party, which largely promotes the interests of organized labor.

While each fusion party claims that it serves some legitimate electoral purpose, the Independence fusion Party is almost laughably corrupt. It bears repeating that electoral fusion is awful. It is the root of very many evils. It allows candidates and other connected individuals to manipulate elections in order to maximize political power and monetary return through patronage for hangers-on. There are just over 13,000 Erie County voters registered in the Conservative Party – there is no rational way that party’s Erie County committee chairman Ralph Lorigo should wield the power he does. There was no way a barber from Springville – Tony Orsini – should have been a kingmaker. The statewide Independence Party was so angry about being manipulated by Democrats who were using it to trick low-information voters who thought they were voting for a small-i “independent” that they decided to become a wholly owned subsidiary of the state Republican Committee.

Electoral fusion is constantly being manipulated by bad people for bad reasons. It is used as a shield against some fantastical electoral rigor whereby a (R) will never color in the box for a (D) and vice-versa. It is used as a sword against people who don’t play ball with very petty people. Schneiderman’s proposed bill is worth advocating for and supporting. Even piecemeal reform is an improvement over our untenable status quo.

Because it doesn’t matter if you’re a Democrat or a Republican in Albany – that’s not remotely what matters. The only thing that matters is money, power, and control. Who owns or owes whom is the name of the game, whether it’s big donors with multiple LLCs or some microscopically small party line that lends the words “independent” or “conservative” to a candidate’s effort.

We know what the problems are, and we even know how to fix them. It’s time that our Albany pols become a bit more self-aware and actually – for once – think of the greater good.