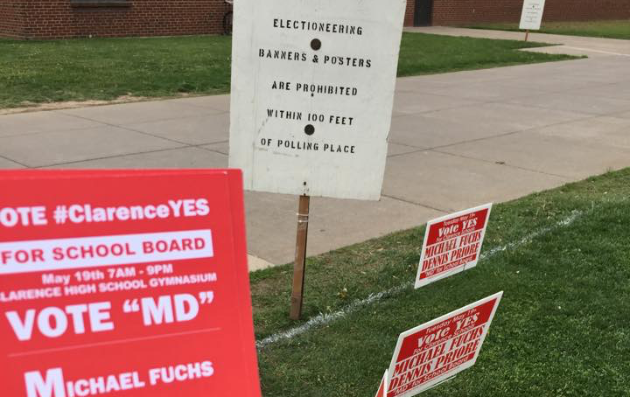 Handing out palmcards outside of a polling place is one of the less controversial things one can do within the context of a campaign. Unless you’re in Clarence.

On several occasions, a pro-school group was given a stern talking-to because people were leaving palmcards around inside the polling place. Well, that’s nice, dear, but that’s not the problem of the people handing out the palm cards – it’s a problem for the people running the vote and they should be on top of that sort of thing.

Handing out palmcards is pretty much standard operating procedure outside of any polling place in any competitive race, and is explicitly permitted by law outside the 100′ exclusion area. It is incumbent on the people receiving the cards to follow the rules inside the polling place, but no one was electioneering inside or within 100′ of the polling place. Perhaps it’s time for the legislature or the Board of Elections to clarify the rule affecting a clearly protected 1st Amendment activity.

But the highlight of my day came as I was passing out palmcards as families were making their way from an elementary school track meet next to the polling place. I was chatting with two 15 year-old student volunteers when a taller man dressed like a fake lumberjack ambled his way right up to me. I asked him if he was on his way in to vote and he said that he wasn’t, and asked me what my name was.

I told him, and he came even closer – his body touching mine, ever so tenderly, and got right in my face. He declared that I had once told him to “go fuck [him]self” in an email a few years ago. I responded, “Did I?” He said, “Yeah.” I said, “Are you [former Clarence town councilmember] Joe Weiss?”  He replied, “Yeah. and I want to tell you to go fuck yourself”. I thanked him, never backing down from where I stood, and as he skulked away I added, “nice language around the kids.”

He stopped, turned, and said, “You know, I really should kick the shit out of you right now”.

I replied, arms outstretched, “Really? Go for it. Because I can’t wait to own everything you own.” His best reply was, “Yeah, it’s a lot more than you own.” and I replied by calling him a true treasure for the community.

This morning, I went through all of my email accounts. Not only have I never emailed Joe Weiss, I never sent an email about Joe Weiss telling him to “go fuck” himself. I never wrote anything – ever – to or about Joe Weiss suggesting that he “go fuck” himself. Here is a link to the only blog posts naming Joe Weiss that I have ever written. Here’s one more. None of them tell Joe Weiss to do anything to himself. I did call him “sinister” and that he was behaving in one instance like a “wanna-be mafioso”. Sort of like how he comported himself outside the elementary school track meet.

Clarence is lucky to have disinfected itself of this horrifically noxious juvenile – a despicable weasel who believes the rules don’t apply to him.

Pursuant to the Clarence Central School District’s code of conduct,

All persons on school property or attending a school function, including athletic events, shall conduct themselves in a respectful and orderly manner.

No person, either alone or with others, shall:

1. Intentionally injure any person or threaten to do so.

It’s amazing that a grown man attending an elementary school event at a high school track would – like some street thug – threaten another adult with physical violence. Joe Weiss once famously said that the “masses are asses”, but I guess he was really just projecting all that time.

Perhaps as a perfect coda, the Clarence Republican Committee voted last night to endorse councilmember Pat Casilio for supervisor over incumbent David Hartzell, whom Weiss helped defeat Supervisor Scott Bylewski in 2011. I mean, that was quick. It also endorsed newcomer Chris Greene over incumbent Bernie Kolber. Evidently this is because Kolber, who had a Kathy Weppner sign in front of his office and has peppered his truck with all manner of anti-Obama bumper stickers (including, but not limited to, “Got a Birth Certificate?”) isn’t Republican enough.

As for Weiss, I will refer the matter to the authorities and the school, in the hope that Weiss is held accountable for his unreasonable and puerile conduct.