Airborne Eddy Has Opinions About Baltimore 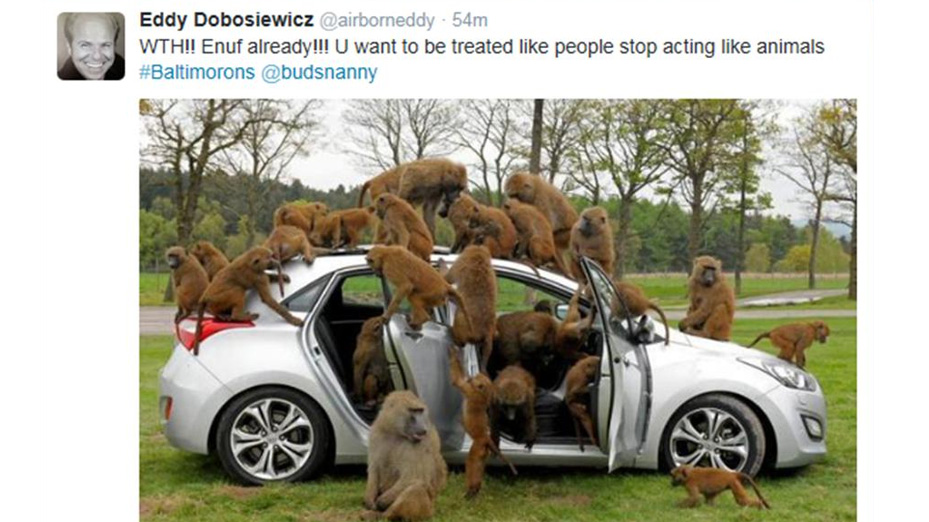 “Airborne” Eddy Dobosiewicz is one of those generally benign, uncontroversial Buffalo celebrities. Most people who know of him, know him to be a keeper of what’s left of the East Side Polonia flame. He organizes Dyngus Day festivities, is involved with the Broadway Market, and on Twitter calls himself a “Jocular jokester, reflective raconteur, purveyor of the ages”. In other words, he is a peddler of nostalgia—distributor of a Buffalo that long ago moved to Cheektowaga or Lancaster or Charlotte. Especially when black people moved to the East Side and Polish people began to move out.

Dobosiewicz is the “co-founder of Dyngus Day Buffalo and president of Dyngus Day LLC”. He is a mogul in the local nostalgia industry, which is far more powerful and influential than racial harmony or social justice. Dyngus Day and its parade, in particular, have become uniquely Buffalonian expressions of nostalgia; it’s Polish St. Patrick’s day, where red replaces green and the hijinks are fueled with Tyskie instead of Guinness. It’s also something of a spectacle to watch a people and a heritage return to the neighborhood they abandoned and fled long ago—replaced by new people and a different heritage—and overrun it with binge-drinking and everything that goes along with it. This article is a nice recap of the trouble with Dyngus Day.

At what point does your ethnicity relinquish claim to an area that it no longer inhabits? Why does this white ethnic group feel entitled to waltz into someone else’s backyard for a celebration?

Exactly. You should see the comments rolling into it now that it’s been brought to people’s attention—the author tells me it’s like “white person reactions to being accused of racism bingo“.  There’s a fine line between celebrating heritage and treating a neighborhood like a safari park as tour guides tell you what used to be here or there, while you’re comfortably pedaling your bike or sitting in an open-air bus. Airborne Eddy is the guide of guides; the mother of all local nostalgia moguls.

Right now in Baltimore, there are demonstrations taking place, protesting the homicide of a black man while in police custody. The vast—overwhelming—majority of protests have been peaceful. A small number of people have resorted to violence, looting, assaults, and other crimes. Civil unrest is a police matter—it’s neither unexpected nor especially rare. The trap you can fall into, though, is projecting all of the telegenic violence onto the entire demonstration as a whole, and then casually dehumanizing and delegitimizing the underlying, valid grievances. Freddie Gray didn’t die—the police killed him.

Back here in Buffalo, where Spring has sprung and the hibernation has ended, there’s been a lot of whitesplaining and hand-wringing in local media over what’s happening in Baltimore.

Apropos of nothing, Airborne Eddy—a Polish guy who promotes Polonia nostalgia in a predominately black community—decided to casually dehumanize the protesters in Baltimore. He derided them as “animals” and accompanied his original tweet with an image of what appear to be baboons climbing all over a small hatchback, like in a safari park. That was jaw-dropping, and by the time the Tweet was brought to my attention, Dobosiewicz had deleted it and replaced it with the same verbiage but an image of wild dogs feasting on a dead carcass. On Twitter, people wanted to know if Eddy deleted the Tweet because he realized how racist and offensive it was. Instead, he doubled down and made a mockery of himself in the process. The protesters in Baltimore are overwhelmingly African-American. The image of black people as monkeys is as offensive as it gets—the “coon caricature” that came out of the antebellum South to justify slavery and reinforce the notion that blacks are inferior to whites and, in point of fact, not even human, but apes.

This is how a reputation self-destructs. This is how the champion of white nostalgia in a black neighborhood takes himself down.