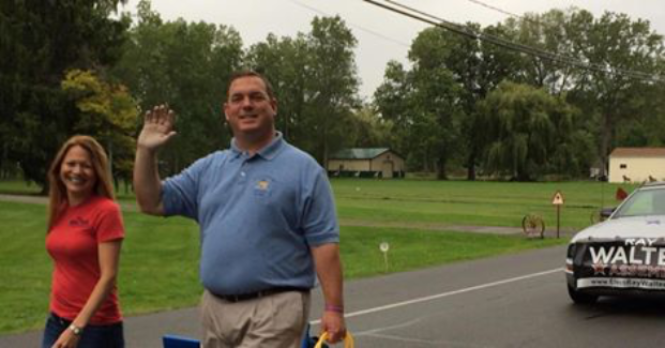 A few weeks ago, the Poloncarz camp did some internal polling regarding its chances (they were good) against a potential challenge from Comptroller Stefan Mychajliw or County Clerk Chris Jacobs. The latter’s numbers were better than the former’s, but Poloncarz still held a commanding lead. We can presume, based on Mychajliw’s and Jacobs’ rapid-fire exits from the County Executive’s race, that the Republicans conducted similar polling, and that its results were not dissimilar from Poloncarz’s own.

In their stead, it appears that Assemblyman Ray Walter is going to challenge Poloncarz. Jacobs sort of let the cat out of the bag yesterday by pledging his support for Walter, who hasn’t announced yet. Walter released a statement yesterday, indicating that he’s still thinking about it, but that he thinks it’s a winnable race.

(By way of full disclosure, I consider both Walter and Poloncarz to be friends, and I have donated money to both. The firm where I work defends Erie County in lawsuits, and Poloncarz recently appointed me – with unanimous legislative approval – to the Buffalo & Erie County Public Library board of trustees.)

I don’t think Ray has much of a shot, and he’s taking one for the team. Both Jacobs and Mychajliw enjoy more crossover appeal, yet neither of them are ready to mount a countywide challenge to Poloncarz. When he was in the legislature, Walter played the role that Joe Lorigo has now – that of snarky right-wing eye-roller. Ray’s nickname among Democratic legislators was “Rush”, as in Limbaugh. He’s more of an outspoken doctrinaire conservative Republican than Mychajliw or Jacobs, each of whom has carefully crafted an image and perception of being above partisanship, regardless of the reality.

For sure, Ray is well-known and liked in his Amherst home-base, but outside of there, he doesn’t come close to the name recognition that Mychajliw or Jacobs enjoy, nor has he really taken on an issue in the Assembly in such a way that gets him a lot of attention outside his district. Think DiPietro and guns. In recent weeks, Walter has been heard on WBEN and seen on his Facebook page taking on Governor Cuomo’s dubious education reforms, but the wheels are still spinning, and there’s not a lot of traction yet.

When Walter last ran he was challenged by Steve Meyer, a young newcomer Democrat who evidently gave him enough of a scare that Mike Caputo excoriated Meyer as a kid who should get a job. Another website, which has a habit of being wrong, wrote that Meyer had a real shot and that the race was a toss-up. In the end, however, Walter’s win was lopsided, as the incumbent received 20,852 votes to Meyer’s 14,641 – about a 60/40 split. Still, Walter’s not a charismatic cross-over candidate with crazy name recognition or deep pockets, and Poloncarz’s tenure has been, if not warm and fuzzy, then careful, responsible, and competent.

With the understanding, then, that Ray is a substitute for Chris and Stef – choice 3 of 3 – bullet-taking such as this can, for instance, earn people cush promotions like judgeships. I know that Ray has to say it’s a winnable race, but that’s unlikely. It’s a steep climb, and Ray has less than $5,000 in his campaign account against Poloncarz’s $422,000. Ray’s climb is also steep because he can’t – at this time – attract Democrats like Stef or Chris. We can’t really assess what Walter might do substantively as County Executive as compared with Poloncarz, mostly because the incumbent’s tenure has been effective and people are generally satisfied with the results he gets.

That seems about right.

But here’s a thought: where’s Ed Rath? He’s got money, and his name is already hanging out on the county shingle.