The War on Diplomacy 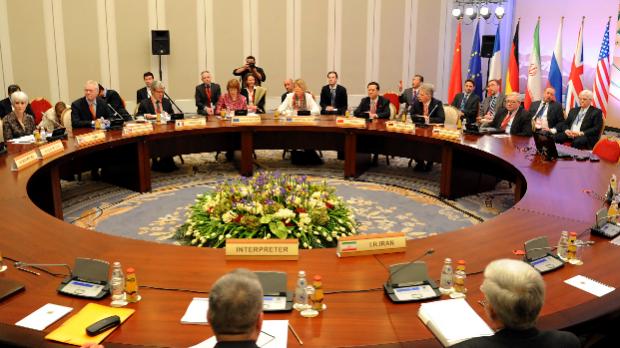 Generally speaking, diplomacy and negotiation is a pretty good way for independent and sovereign nation-states to resolve differences. More importantly, however, diplomacy and treaties help to prevent war. War should be a last resort, not a foreign policy tactic. Our misadventure in Iraq stands as an example of how stupid it can be to rush to war. Invading Iraq, removing Saddam Hussein from power, and occupying that cobbled-together multiethnic, multi-sectarian state had absolutely no positive impact on regional security.  Quite the opposite, in fact.

Nowadays, most especially since President Obama’s election, any sort of diplomacy is seen as Chamberlain ceding the Sudetenland to Hitler at Munich; appeasement.

Right now, six nations are negotiating a comprehensive deal with Iran to ensure that this regional sponsor of terrorism cannot develop nuclear weapons. Generally, Republicans who don’t trust President Obama might at least be heartened by the fact that Britain’s Conservative PM and Germany’s CDU Chancellor Angela Merkel are at the table with the US, France, Russia, and China. But negotiation and diplomacy are now considered appeasement.

Never mind that the absence of a deal between the permanent members of the UN’s Security Council plus Germany will free Iran to develop whatever nuclear weapons it wants under the quickest timeline it can possibly muster. Negotiating a deal with Iran with a strong inspections regime can ensure that Iran doesn’t develop nuclear weapons that it could use against our friends in the region. But negotiation and diplomacy are now considered appasement.

Never mind that Iran is simultaneously funding and supporting militant Shi’a groups like Hezbollah in Lebanon, it’s also helping our allies fight Daesh in Iraq. It’s an unlikely alliance, but the enemy of our enemy is often our friend. But negotiation and diplomacy are now considered appeasement.

Never mind there’s no deal finalized yet, and we don’t exactly know what the outlines of any putative deal might be. Never mind that, for all its faults, a thaw in relations with Iran could have very positive effects for both countries and the region. Iran has been crippled by international sanctions imposed at the UN to halt its nuclear ambitions; it has a palpable incentive to negotiate in good faith. But negotiation and diplomacy are now considered appeasement.

Forty-seven Republican Senators signed an unprecedented communication to Iran’s government, offering up a big middle finger to President Obama and a condescending lecture about our Constitution, indicating that President Obama has no authority to negotiate and conclude any deal with Iran and our four negotiating partners. To so blatantly and openly undermine a President who is in the middle of negotiating a multilateral deal with our partners. Labour isn’t undermining David Cameron, and the SDP isn’t undermining Angela Merkel. The Republicans’ hatred and disrespect for President Obama is so strong that it vastly outweighs their love of this country.  These 47 lawmakers would weaken the US to embarrass the President.

What have they accomplished with their letter? Nothing. The President – rightly – accused these Republicans of aliging themselves with Iranian hard-liners who also want no deal, so they can be free to develop whatever weapons they want. Do these 47 Republicans prefer war – possibly nuclear war – with Iran rather than a deal preventing war? The Iranian Foreign Minister called it what it was – a propaganda ploy to kill any deal, regardless of what it might contain.

In thirty-six years in the United States Senate, I cannot recall another instance in which Senators wrote directly to advise another country—much less a longtime foreign adversary— that the President does not have the constitutional authority to reach a meaningful understanding with them. This letter sends a highly misleading signal to friend and foe alike that that our Commander-in-Chief cannot deliver on America’s commitments—a message that is as false as it is dangerous.

The decision to undercut our President and circumvent our constitutional system offends me as a matter of principle. As a matter of policy, the letter and its authors have also offered no viable alternative to the diplomatic resolution with Iran that their letter seeks to undermine.

Many have accused these 47 Republicans of violating the “Logan Act”, a piece of legislation from 1799, which reads in relevant part:

But even as a political ploy, how is this different from the recent efforts to link funding of the Department of Homeland Security with a shutting down of President Obama’s recent immigration policy initiative? The GOP might have the majority in the Senate, but not a veto-proof one, and by so egregiously undermining a President whose administration is in the middle of negotiating a deal with our partners and Iran, it ensures that the issue is now politicized and they’ll never get Democrats on board to help them.

A senior American official said the letter probably would not stop an agreement from being reached, but could make it harder to blame Iran if the talks fail. “The problem is if there is not an agreement, the perception of who is at fault is critically important to our ability to maintain pressure, and this type of thing would likely be used by the Iranians in that scenario,” said the official, who spoke anonymously to discuss the negotiations.

The White House and congressional Democrats expressed outrage, calling the letter an unprecedented violation of the tradition of leaving politics at the water’s edge. Republicans said that by styling it as an “open letter,” it was akin to a statement, not an overt intervention in the talks.

Congressional Republican hatred of the President outweighs love of country. Republican hatred of Obama is more important a policy goal than an international deal ensuring that Iran can’t develop a nuclear weapon. The deal sunsets in 10 years? What would prevent these world powers from negotiating something permanent down the road?

Preventing Iran from developing a nuclear weapon is a bipartisan goal. Pre-rejecting a deal that doesn’t exist is counterproductive and stupid, and undermines the President and makes the US seem like an untrustworthy bad actor that lurches around like a banana republic. It’s stupid because it’s bad politics, bad policy, and an ugly precedent to set. Hey, good job taking the “Hillary Clinton E-Mail” story off the front page, Republicans!

The real appeasement would be to abandon these negotiations and simply free Iran up to develop nuclear weapons. The only reasonable conclusion one can draw from this “open letter” is that at least 47 Republican Senators prefer to go to war against Iran. The war on diplomacy has got to end.