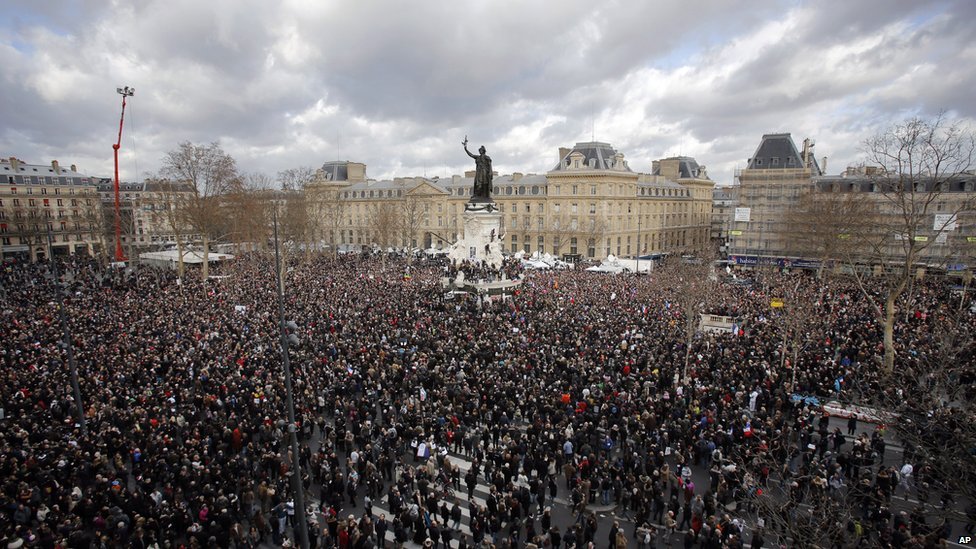 On Sunday, there was a huge rally in downtown Paris in honor of the people slain during the week in attacks by jihadist madmen. It was a strong show of support for the principles of pluralist democracy and freedom of speech, including the freedom to offend and ridicule.

The United States Government was not visibly represented at the rally.

This has resulted in two astonishing domestic right-wing memes. One is predictable: Obama is a national disgrace. The second was unforeseen: America’s right wing suddenly like France.

It wasn’t always thus. In 2003, France had the foresight and bravery to oppose the United States’ disastrous invasion of Iraq. In response, some Republican forced the House cafeteria to re-name French Fries “Freedom Fries”, because – duh – France hates freedom. It was America’s right wing that invoked a crack from a cartoon to deride the French as “cheese-eating surrender monkeys”. American right-wing Francophobes have repeatedly derided France as being a bunch of anti-American, anti-freedom cowards. One t-shirt from a decade ago declared, “First Iraq, Then France”.

Now, all of a sudden, it is safe even for conservative Republicans to feign respect for France. After all, now there’s an empty Champs-Élysées leading directly to Place de l’Obamaphobie.

This anger at Obama not going to Paris to march in the unity rally is completely fake and homegrown.

This rally in Paris isn’t about Obama and it isn’t about the US. If our participation would have misdirected attention from the rally’s purpose to something different, then it’s better the POTUS not go. American Ambassador Jane Hartley – whose mission is to represent American interests, citizens, and values in France – marched in the demonstration.

This wasn’t a state funeral or some summit meeting with the G7. This was a street demonstration.  Think Kennedy in the open-top Continental, but there’s no getaway car. The President doesn’t generally do “impromptu”, and he definitely doesn’t attend a street demonstration in a foreign capital. Even if he did, the security would be ridiculous.

When the President does his inaugural parade, he’s in an armored Cadillac. He gets out only when the Secret Service says it’s safe to do so, and even then, he’s flanked by more security than you or I can imagine. But we’re supposed to believe that he can just stand at the front of a cordon of world leaders in downtown Paris on a Sunday, and the already-beleagured Secret Service would just go along with that? This was a rally with 3.7 million people. Hell, if it’s so important, did you go?

The bottom line is: never let an opportunity to hate Obama get in the way of facts; there’s no winning.

Secretary of State John Kerry wasn’t there – he was in India on a previously scheduled visit. But in 2004, the Republicans blasted Kerry for “looking” too French; now he’s not French enough? Israeli Prime Minister Netanyahu was at the Paris Charlie Hebdo rally, but in 2013 his government complained to the UK about an editorial cartoon Israel considered to be anti-Semitic. Russia sent its foreign minister – Putin’s Russia, which has implemented media censorship and harassment that is closer to pre-Glasnost Soviet actions than with any nominal support for political satire or freedom of expression.

The White House said Monday that it should have sent someone with a higher profile to the march. Why? Whom would that appease? Ted Cruz and Marco Rubio? Not the French, for sure – a quick scan of Paris papers on Monday reveals that France wasn’t so much worried about why Obama wasn’t there, but instead why several world leaders were. More to the point, Reporters Without Borders issued a scathing criticism of the characters who marched in Paris ostensibly in support of press freedom.

On what grounds are representatives of regimes that are predators of press freedom coming to Paris to pay tribute to Charlie Hebdo, a publication that has always defended the most radical concept of freedom of expression?

Reporters Without Borders is appalled by the presence of leaders from countries where journalists and bloggers are systematically persecuted such as Egypt (which is ranked 159th out of 180 countries in RWB’s press freedom index), Russia (148th), Turkey (154th) and United Arab Emirates (118th).

“We must demonstrate our solidarity with Charlie Hebdo without forgetting all the world’s other Charlies,” Reporters Without Borders secretary-general Christophe Deloire said.

“It would be unacceptable if representatives of countries that silence journalists were to take advantage of the current outpouring of emotion to try to improve their international image and then continue their repressive policies when they return home. We must not let predators of press freedom spit on the graves of Charlie Hebdo.”

“Obama marches in streets of Paris with leaders of oppressive regimes” would have been the right-wing meme in the alternative universe where Obama attended the march. The cover of Liberation focused on Netanyahu visiting the Kosher supermarket that was attacked, noting that some media reported that Netanyahu came to Paris uninvited. Liberation only noted that American media were criticizing Obama’s no-show; it did not echo any actual French sentiment along those lines. Le Monde noted how former French Premier Nicolas Sarkozy “shook protocol” by getting up to the front of the line. It also focused on the French debate over whether they should implement something like our “Patriot Act”. Le Monde noted that Obama wasn’t at the Paris rally, but covered his visit to the French Ambassador to Washington.

Had Obama gone, these people with their fake outrage would have been sharing some semi-literate Breitbart or Twitchy piece about how that uppity Obama and his fat wife and stupid kids used Air Force One to go to a thing at a place.

The people angriest about Obama not going to march with the Gabonese, Malian, and Palestinian heads of state in Paris are the ones who would criticize him for doing just that if he had gone. France isn’t mad; it didn’t necessarily need Obama to be there, and the feigned outrage over his absence comes from one particular sentiment that had no business being part of that rally – American chauvinism. We don’t always have to make everything about us.

The people most vocally feigning anger at Obama not marching in Paris are the very people who viscerally hate Obama’s very existence. They blame him for not going because what – he supports terrorism? Because he’s a seekrit Moozlim and supports the jihadists?

Let’s dismiss it as the nonsense it is.