Carl Paladino Has Important Things to Say About Things 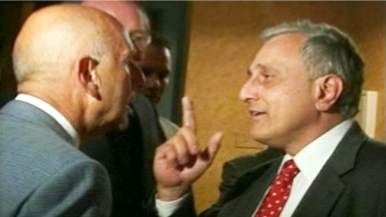 Carl Paladino ran for governor of the state of New York.

The market has improved for residential development. It’s fairly good right now for apartments…Young people – and it’s just a trend thing – they’ve had it with … mowing lawns and all that. They want the urban life they see on TV, and to live approximate to things

Carl Paladino is a wealthy developer who is well-respected in the community.

Paladino said he hopes the mostly vacant Commodore Perry housing complex nearby will eventually be torn down.

“We’re just praying that they don’t rehab those apartments and put people back in them. Hopefully, they will get rid of the whole thing and tear it down. That Perry Street has caused a lack of interest in any development there.”

Carl Paladino is an elected school board member who has his finger on the pulse of goings-on in WNY.

“They made a big mistake by making [Ohio Street] into a two-way highway when it should have been a four-lane. It’s a terrible mistake. You can’t park a car. And if you’re on it and stuck in traffic, you can’t even turn around. And they’re talking about it being one of the feeders to the Outer Harbor,” Paladino said.

Carl Paladino is on the board of Buffalo Civic Auto Ramps, which is so forward-thinking and consumer-oriented that its ramps take only cash, even in 2014.

“How many people are riding bikes in this community? For four or five months a year you can’t ride a bike in the snow. If you want to ride a bike, do it on the sidewalk. That’s why they have sidewalks,” he said.

It is against the law for adults to ride bicycles on the sidewalk. It’s a sidewalk – not a sideride. Just shut up and run your company. No one gives a shit about your lunatic crackpot opinions.