Can’t figure out what good protesters screaming “hands up don’t shoot” at BPD officers is doing for anyone. @BPDAlerts @NewsRadio930

Good question. What does protesting and shouting slogans “do for anyone”?

In February 2013 WBEN featured wall-to-wall “news” coverage of a pro-gun rally that took place in Albany to protest Governor Cuomo’s NY SAFE Act. Albany sees protests on a daily basis, but in this case WBEN sent reporters, commentators, and organized a bus charter to Albany and back for its listeners. (Here’s the photo album!) Tim Wenger was on the bus, too. But while Wenger doesn’t understand what all these people think they’ll accomplish by protesting the fact that Eric Garner’s killer won’t be brought up on criminal charges, he had a completely different opinion when it came to busing a bunch of listeners to Albany and back for a gun law that’s still on the books over a year later.

It really doesn’t matter to me or WBEN where you stand on this issue of the NY SAFE ACT.  What matters to us is that people have the passion for their beliefs and that they’ll fight within their Constitutional rights for what they think is right. .These people aboard both our buses, more than eighty strong, are working Western New Yorkers who are taking a day of their life to rally for what they believe in.  That’s what it’s all about. I’ve met every single person on the buses and all are friendly and excited, despite being a tad tired.  There is a sense of excitement aboard the buses as a group of mainly strangers who came together on the radio make a day-long trip to have their voices heard. What will happen when the rally is over and the people and buses leave?  No one knows for sure.  The hopes of those aboard the buses is that a repeal will be in the works. But when all is said and done and the last person leaves the rally and the buses arrive back home, one thing is for sure. Democracy worked and allowed a group of people passionate about an issue and their rights to be heard. Tim

But when it’s people passionate about an issue he doesn’t agree with, then WTF LOL, right?

I love the banner here.

The answer, of course, is that there’s nothing to “figure out”. Tim Wenger “can’t figure out what good protesters screaming “hands up don’t shoot” at BPD officers is doing for anyone” because he’s a Republican partisan who operates a Republican news outlet. Yelling “hands up don’t shoot” or “I can’t breathe” during a protest is as meaningful – or pointless – as a radio station sponsored bus trip to yell “Skelos is a traitor” and “Down with il Duce Cuomo” in Albany.

Oh, and this was hanging in the WBEN Newsroom: 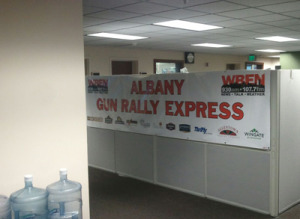 Maybe Wenger just couldn’t find sponsors to list along the bottom of a banner? Incidentally, the businesses shown there – Country Inn & Suites, Wingate by Wyndham, Thrifty Car Rental, Hampton Inn, Dollar Rent-a-Car – those are all Paladino-owned franchises of national firms. (Remember when Paladino had his people smack “Vote for the American” bumper stickers on cars rented from his franchises at the Buffalo Airport?) Do you think that the corporate bosses for the national brands know, or are supportive, of their trademarks being used so blatantly for a partisan political purpose?

Anyhow, everybody gets to shout slogans pointlessly in the cold and dark – gun huggers as well as people protesting the homicide by cop of a guy standing on a sidewalk selling loose cigarettes.