Get yourself some snow tires.

Your pickup or SUV? Its 4 or all wheel drive will help you get un-stuck, and it’ll help you get going on some #sloppery stuff. Its ground clearance may occasionally help you ford a river or drive over a big snowball. But its mass is such that it makes it especially difficult to stop.

Your anti-lock brakes? They’ll help you avoid a skid by automatically applying and releasing the brakes in quick succession, but they won’t help you avoid an accident if you’re going too fast.

Or if your tires suck.

Thursday morning’s commute in Buffalo was your typical rush hour first-snow crawl. (Snowvember doesn’t count because most everything/one was closed that day). Just about every route was packed in, at a standstill. A 40 minute commute took me – no joke – 2 1/2 hours.

Aside from all the dummies who thought it was good enough to just brush the snow off the windshield and nothing else, there were myriad people blocking intersections, sliding around, and getting stuck because they have crap tires. Even if you have a brand-new set of decent all-weather tires, they might as well be bald in the kind of wet, slushy snow we got yesterday morning.

The best of all possible worlds? AWD or 4WD with snow tires. If you have a Subaru or Audi Quattro with a good set of snows, your car will be bulletproof in the ice and snow. But the big secret is that you don’t need the extra cost, heft, and maintenance that comes with powering all four wheels – not in WNY, where the main roads generally get cleared pretty well.

Get yourself some snow tires, instead.

For instance, some local tire stores will store your summer tires in the winter, and vice-versa. For free. Go in, pay about $100, and they’ll do the switchover, usually installing snows in November and summers in April. You extend the lives of both sets of tires, and you’ll have the appropriate shoes on your car. 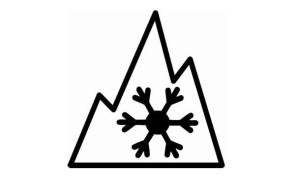 Make sure your winter tires have this symbol

In some countries, snow tires are mandated. This is a smart idea and something that snowy climates should seriously consider. Driving is no joke, and if you’re hurtling a 2-ton piece of rubber and metal down the street in a snowstorm, other drivers should have some semblance of assurance that you’re appropriately equipped. Snow tires are different from summer or all-weather tires in that they use a softer rubber compound, and feature deep sipes that literally help the car dig into the snow and ice. The best set I ever owned were Finnish-made Hakkapeliitta 2s, which rendered a car that had no traction control into a snow tank.  I always had to get them online, which is a hassle, but I haven’t not put snow tires on a car since my second winter here. You can get a set of Blizzaks, which are very good, or whatever your local tire shop offers, which will be fine, too.

Quebec mandated that all vehicles registered there are equipped with winter tires Between December 15th until March 15th, or else risk a $200 – 300 fine. Despite the fact that Quebec had a winter tire adoption rate of 90% before the law was passed, since its passage wintertime accidents have decreased by 17%, and accidents causing serious injury or death dropped by 36%.

You can’t leave them on all year, because the rubber compound only works well in the cold weather. But if you, for instance, go from no snow tires on a slippery day to snow tires, you’ll be astonished by the difference in traction you have. Not just start and stop traction, but especially lateral traction, when you’re turning. Traction / stability control will help, too.

We’re known for snow. We get snow. You drive in it. If you enjoy having control over your car in the snow, ice, and slush – the ability to start, stop, turn, and drive with some modicum of safety – pay your local tire guy, car dealer, or mechanic a visit. Maybe go to Tirerack.com or some other online retailer.

But whatever you do, get yourself some snow tires.