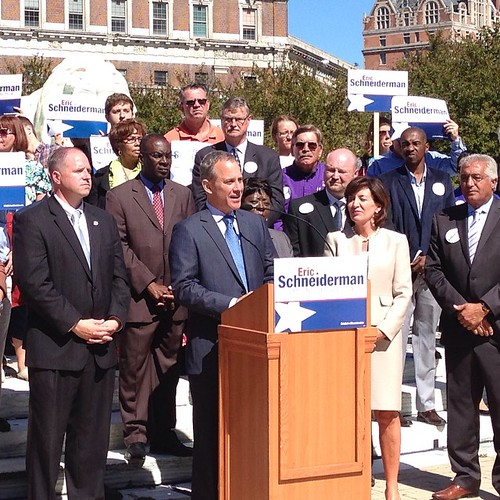 Courtesy of my friends at the new and improved Albany Project comes news that Attorney General Eric Schneiderman formally asked Governor Cuomo to transfer the investigation and prosecution of excessive police violence cases over to the AG’s office.

The problem stems from the fact that local DAs and police work hand-in-hand as colleagues, and there are questions as to whether these cases are taken seriously and prosecuted as vigorously as non-police violence cases.

DAs are already opposed to the idea.

In the wake of the gobsmackingly unreasonable and astonishing refusal by a Staten Island grand jury to indict the officers who killed Eric Garner, Governor Cuomo demanded a “soup to nuts” review of the justice system, but for some reason lawmakers who think themselves “law and order” types are resisting any such query.

Not just that, but in the minds of some of these mostly Republican “law and order” people, that term doesn’t apply to cop conduct. Even body cameras, additional training – not to mention the use of special prosecutors for police brutality cases – appear to be non-starters in New York State.

No way he hands Schneiderman a victory, even if it means denying meaningful justice for victims of police violence.