In 2012, Mitt Romney told Time Magazine’s Mark Halperin that by the end of his first Presidential term (i.e., 2016), he would get the unemployment rate “down to 6 percent, perhaps a little lower”:

HALPERIN: Would you like to be more specific about what the unemployment rate would be like at the end of your first year?
ROMNEY: I cannot predict precisely what the rate would be at the end of one year. I can tell you that over a period of four years, by a virtue of the polices that we put in place, we get the unemployment rate down to 6 percent, perhaps a little lower.

He later went on Fox News to repeat his promise, and added,

“People all across the country are saying, ‘Wow, 6 percent sounds pretty good,’”

Mitt Romney lost. So, how did the unemployment rate do under Marxist Fascist n0bummer?

2. Friday’s jobs report showed 321,000 new jobs, and 91% of them were not in health care, showing that other sectors are showing signs of growth, confidence, and improvement.

3. Here’s how employment has gone, starting with the 2008 Bush economic collapse: 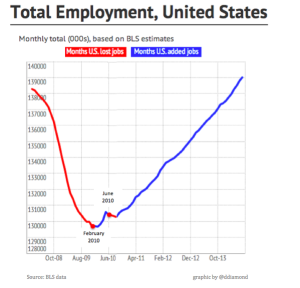 In 2012, President Newt Gingrich blamed President Obama for high gas prices, claiming that he had a plan to bring prices at the pump at or below $2.50/gallon. Just about anyone with a brain dismissed Gingrich’s promise as utter nonsense. The President has no power over global oil prices, much less the cartel of oil producing nations. The price of gasoline had climbed during the last decade with turmoil and supply disruptions arising out of the Iraq war, and was exacerbated by Hurricane Katrina, which took a huge chunk of America’s refining capacity offline. Gas prices plummeted in late 2008 / early 2009 thanks to the global economic downturn, but oil prices soon rebounded and until recently had been north of $100/bbl.

But OPEC leaders recently were unable to agree on production cuts to prop up the price of oil, and prices have plummeted – both crude and at the pump. The average price for a gallon of gas right now is reaching $2.50 nationally.

Of course, when you compare the national average to Buffalo, you get higher spikes locally, and much slower responses to drops in prices.

Even if you compare us to Rochester, it’s evident that Buffalo seems to be taken advantage of.

I don’t think it’s because we’re at the end of some pipeline, and it can’t be taxes. It’s something else, and it’d be nice if someone figured out what.

So, thankfully we didn’t have to do a thing – the economy has been making improvements in spite of Congressional gridlock and malfeasance, such as the 2013 shutdown. The price of gas has fallen in recent months because of things that have happened in the global marketplace, rather than by Presidential fiat.

As consumers find they pay less to fill up cars that are now significantly more fuel efficient than 20 years ago – the average MPG has jumped from 20 to 25 just since 2007 – that’s money back in their pockets and helps to stimulate other spending. American crude oil production has skyrocketed since Obama took office, thanks in large part to shale oil (not to be confused with hydrofracking, which produces natural gas).

So, more efficient cars help to lower demand, and a combination of increased domestic production, and OPEC stalemate help to keep supplies high, and even with a rebounding domestic economy, we’re seeing gas prices come down to Gingrichian levels.

The current unemployment rate is 5.8%, which outperforms what Mr. Romney promised might happen under him by 2016. December’s jobs report represented the 10th straight month of job gains surpassing 200,000.