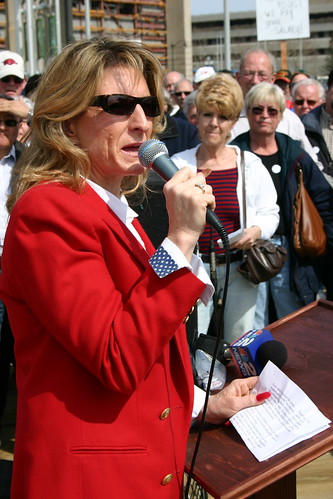 I know some of you think that it might have been a little much with the Weppner posts over the past week or so.  You have my sincere sympathies.  My most fervent wish is to never again have to dive into the fever swamps of ultra-right wing fascistic chatter in order to find tidbits of information that render local tea party candidates, to my mind, unelectable.

The scary thing is that, in terms of politics, opinions, and pronouncements, there’s hardly much difference between Weppner’s lunatic ravings and Chris Collins’ constant drumbeat of anti-middle class millionaire resentment; it’s a very fine line between WBEN caller and representative from NY-27.

A few weekends ago, the Buffalo News’ Jerry Zremski picked over some of the more malodorous parts of the Weppner mindswamp, and asked her for an interview. She declined, and agreed instead to answer via email. The result was a glorious, factual recitation of some of the things she’s promoted and said, and her weak explanations for them. (Weppner Vetted 3/24/14) Much of it surrounded her very outspoken involvement in the “birther” nonsense, questioning whether Barack Obama was born in Hawaii, or part of some half-century-long conspiracy to overthrow America.

Finally, there was the call to Limbaugh in 2009 – just a month after Obummer overthrew ‘Murrka, and Weppner threatened to go Galt because Barry and his cadres were going to just take everything anyway and give it to the lazy takers, (ostensibly the aforementioned teachers, firemen, policemen, and lazy blacks). Meanwhile, I learned that even physicians who receive Mexican medical degrees can earn a tremendous amount of money here in the United States. Weppner. What a card! (Kathy Weppner on Going Galt 4/4/14).

The best part? This campaign has barely started.