Back in 2010, we were driving home from a Spring break trip to the Destin when we stopped off in Knoxville, TN for the night. Having no idea where to go for dinner, I thought pizza would be good, so I looked on Yelp and Urbanspoon for the best pizza in Knoxville. The answer was “Hard Knox Pizza“.  A quick-serve location, it had a simple menu with a boxing theme, a few beers on tap, and a wood-burning pizza oven. It was one of the first and most successful purveyors of what’s known in pizza circles as “Neo-Neapolitan” – taking the basics of Neapolitan pizza-making and giving it a contemporary twist. I spoke with the owner back then and learned a lot about how he got started and what it took for him to make a successful business.  Here’s a picture of the pie I had in Knoxville in late April 2010:

Pizza snobs will tell you that proper Neapolitan pizza is done in such a way that it’s even governed by a few ad hoc bodies approving places as being “Verace Pizza Napoletana”, or similar. Under the VPN guidelines, you have to use a specific type of flour, San Marzano tomatoes, “00” flour and a very simple dough recipe, specific types of cheeses, a dollop of olive oil, and a few basil leaves to make the proper Neapolitan “Margherita” pizza.  The only other two official Neapolitan pies are the Marinara and the Margherita “extra”. There are several authentic VPN-certified locations in Toronto that offer up not just great pies, but a fun atmosphere; Queen Margherita Pizza, Pizzeria Libretto, and Pizza e Pazzi, to name a few.

There are none in Buffalo. There are a few places that do something very close to the real thing – the 99 Brick Oven in Lancaster has a Marra Forno gas-assisted oven and produces a good pie. Rocco’s on Transit in East Amherst has a certification from a competing Neapolitan pizza group, and produces quality pies in wood-burning ovens, but you have to ask them to not spread olive oil over the cornicione for it to be really good. But no one in WNY consistently does anything resembling what’s happening in Toronto and the rest of North America.

Last February, we traveled to the Southwest US and one of the stops we planned was to visit Pizzicletta in Flagstaff. Caleb Schiff had bicycled throughout Italy and built a wood-fired oven in his backyard, and we followed along on Slice.com as he set up his tiny Neapolitan pizza place, and we had to try it. It was a revelation – again, simple little place with simple ingredients making outstanding pies – with no certification. My favorite was the Amore oi Mari – 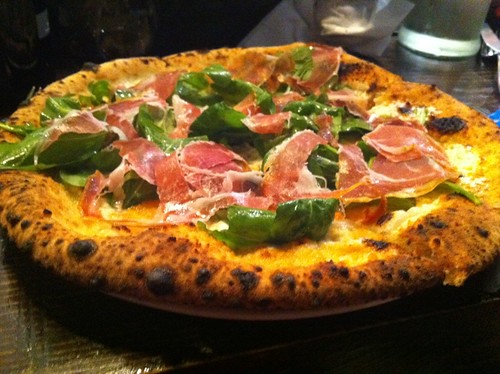 Mascarpone, arugula, pecorino, prosciutto di Parma, and a drizzle of Meyer lemon olive oil – it was a rich, satisfying concoction the likes of which I haven’t had before or since. Well, since – I’ve tried to duplicate it a few times, but the mascarpone gets too gloppy and I haven’t figured out how to spread it more evenly. That’s a picture of the one we had in Flagstaff last February.  If I could, I’d drop everything and fly out to Arizona right now to have one and spend the next day at the Grand Canyon. 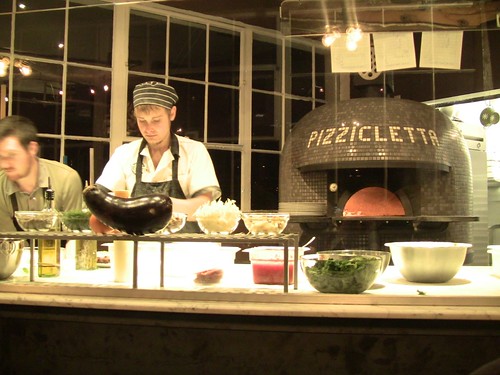 Simplicity. Simple, fresh ingredients and a pie made in a Stefano Ferrara oven with love. It’s art.

This past week, we went to one of our favorite local pizza places – La Hacienda in Niagara Falls. The owner is a great guy and he makes one of the best pizzas in the area. His menu contains an entire history of the Margherita pizza, and a funny quote about how they’re still “learning the ropes” and they hope to get it right someday.

So, Mercado Revolution is introducing a European market concept to WNY. It’s something that’s been done in other cities, and will be modeled after the markets in Spain and the Union Market in D.C. It’ll have tapas, cheeses, chocolate, coffee, nuts, ice cream from Lake Effect and a Lloyd’s Taco test kitchen. The ambitious Kickstarter campaign concludes this Thursday, and it has a way to go to meet its goal, but it’s almost halfway there. It needs your help.

One of the foods on offer will be wood-fired Neapolitan pizza. Whether it’ll be certified VPN or not, it’s too early to tell.  I can tell you that I intend to be involved in that venture in some capacity. I want to introduce this product that I think is so awesome to WNY – one of the simplest and oldest Mediterranean foods there is. If all goes well, we’ll have a Ferrara oven and it’ll be done right – it will be done to my satisfaction and in a way that will hopefully convert people over to the Neapolitan way. I will be your wood-burning pizza proselytizer-in-chief.

If you want to see this happen, kick in to the Kickstarter and get Mercado over the hump.

(This is not an April Fool’s prank, BTW)